Home Government Mr. President: By Refusing to Look Back, You’re Jeopardizing What Lies Before...
BENEATH THE SPIN • ERIC L. WATTREE 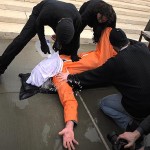 Mr. President: By Refusing to Look Back, You’re Jeopardizing What Lies Before Us
*
I undoubtedly have neither the information nor wisdom to question the vast majority of your presidential decisions. But it takes neither classified information, nor wisdom, to question your decision to “move forward and not look back” regarding the Bush administration’s actions leading this nation into the Iraq War, and the alleged war crimes committed thereafter.
*
During your inauguration you swore that to the best of your ability you would act to preserve, protect and defend the Constitution of the United States. Yet, your decision to circumvent the rule of law in response to the Bush administration’s actions leading up to and during the War in Iraq does everything but that. Your position in this matter is diametrically opposed to one of the fundamental principles of this nation – that no one is above the law.

This is not a partisan issue, Mr. President. The concept of equal rights under the law (which also means equal consequences for the violating the law ) is both central to the United States Constitution, and a fundamental cornerstone of the American ideal. Without that concept – the concept that no man is above the law – America is no longer America. So by choosing to ignore that ideal, you’re not only in violation of your oath of office, but you’re striking a much more devastating blow against America than Al Qaeda could ever manage.

And I’m not speculating here. We’ve already seen the negative consequences of setting such a precedent. Hundreds of thousands of people have died just because we failed to hold Richard Nixon accountable for Watergate.

Had Richard Nixon been held accountable and sent to jail for Watergate, chances are Ronald Reagan wouldn’t have embarked upon Iran/contra. And if Reagan had been impeached then imprisoned for his actions during the Iran/Contra episode – including flooding the inner cities of this nation with drugs (an action the Black community is still suffering from) – Bush and his cohorts would have been placed on notice that ANYONE who circumvents the laws of this land will face heavy consequences.

Thus, had Bush and Cheney known that America stood united and unequivocal in that stance, the War in Iraq probably never would have happened, which in turn would have saved the lives of thousands of American troops, and hundreds of thousands of Iraqi citizens.

One would think, Mr. President, that you would be particularly sensitive to the importance of adhering to the rule of law. While I’m in total agreement with your position that you were elected to be the president of ALL the people, there was no way you could avoid bringing the experience of the African American collective into the White House with you. That experience should inform you, in a very personal way, of the negative consequences of ignoring the rule of law.

Let me make it clear that I’m not one who subscribes to the belief that because you’re a Black president that you owe Black people any more than you owe any other American. In fact, my article immediately prior to this one is in direct opposition to Tavis Smiley’s position in that regard. I view Tavis Smiley’s position as both self-serving and shortsighted, because the corollary of his position is that all of the White presidents who follow you owe a special alliance to White people, and as I see it, that is exactly the position that the civil rights movement was established to oppose.

But that doesn’t mean that you shouldn’t bring the knowledge and wisdom of the Black experience to bear as you carry out your job as chief executive. And part of that experience should be the wisdom to understand that this nation’s failure to strictly adhere to the rule of law led directly to the lynching of Black people and the bombing of Black churches in the South. It also led to Jim Crow, rules that distorted the law of the land that were specifically designed to circumvent the law’s intent.

So I sincerely hope that you will consider the historic symbolism of your position in this matter. After all of the hardships that Black people have gone through as a direct result of this nation’s penchant to ignore the rule of law “for the better good,” regardless to what you accomplish on behalf of this nation as president, future historians will look back upon the first Black President of the United States taking a position to ignore the law and “not look back” on the unjust murder of hundreds of thousands of Iraqi people and thousands of American citizens, as grossly unconscionable, and a dark mark upon your presidency.

But even if you can live with that, current events clearly demonstrate that the slippery slope in which the nation has slid over the past thirty years is becoming even more steep as this column is being written. Who would have thought just a mere thirty years ago that the validity of war crimes, torture, and the blatant invasion of privacy of the American people would even be a subject for debate in this country? And who would have thought that a Vice President of the United States would be under a cloud for revealing the identity of a CIA agent, or that a corporation that he formerly headed would be guilty of providing American troops with contaminated water for profit?

And further, who would have thought a mere thirty years ago that American troops would be sent into an unnecessary war without the equipment necessary to sustain their lives, then when wounded, made to pay for the equipment that had to be cut from their body and left on the field of battle? And who would believe that this nation would then force those brave troops to pay for their own meals while lying in the hospital recuperating from their wounds in the nation’s defense?

Yet, now you say let us, “not look back?” Oh no, I don’t think so. I don’t think that once the American people come out of the shock of the past ten years they’re going to let that fly. They already sense that there’s something terribly wrong with our government; they’re just currently in shocked disbelief – but they’ll be coming out of that shocked disbelief somewhere around the 2012 election.

In my opinion you’re one of the best presidents that we’ve ever had in many ways, but there’s only one chink in your armor – you seem to be unwilling to confront the GOP in an aggressive and forthright manner. Ordinarily that might be considered less than important, but in the current political environment it is just as serious a shortcoming as if you were reluctant to confront Al Qaeda.

The GOP leadership is a much more serious threat to the American way than Al Qaeda can ever be. While Al Qaeda is undoubtedly a physical threat to the American people, the GOP is attacking America’s soul. They’re attempting to alter what America is as a nation – and you’re failure to address that issue is so counter- intuitive to your political base, who, after all, voted for change, that many are beginning to wonder if you’re not part of the problem.

In short, Mr. President, we don’t give a damn about the appearance of bipartisanship. In this case, to be bipartisan means, “Ok, let’s comprise and just destroy America a little bit.” You’re political base – which includes Democrats, Independents, and Republicans – are not interested in that. We’re looking to you to defend the American way of life, by any means necessary – period.