The small city of Canal Fulton, Ohio, rolled out the “red carpet” and flag waving crowds swelled along the streets in anticipation.  May 17, 2009 was an exciting day in the communities along the historic Ohio & Erie Canal for it marked the launch of an annual event to honor Ohio’s Veterans, the first “Run to the Ohio Vietnam Veterans’ Memorial Wall”. 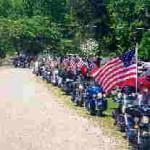 Bundled against the frosty May morning, many riding for hours, the motorcycle riders began arriving from all over Ohio and surrounding states.  Beside the Canal Boat, St. Helena Heritage Park was rapidly swelling to the seams as over 1000 riders assembled for the occasion.

The vision of one Vietnam Veteran, Luke Patrino, was about to make its heart wrenching debut.  Vehicles of every imaginable type with riders of every age and from all walks of life commingled with locals waiting for the pilgrimage to begin. 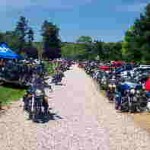 The massive group began to “light ‘em up” with Mayor John Grogan and Road Captain, Luke Patrino taking the lead behind the motorcycles of the Ohio State Highway Patrol escort.  Aided by law enforcement from all surrounding communities the intersections were cordoned off as the “run” began moving through the crowd lined streets towards the Ohio Vietnam Veterans’ Memorial Park.

As they rolled into the park itself, the contingency was joined by 700 riders from the north awaiting their arrival.  Together, with another approximately 5,000 folks, they dedicated the Ohio Vietnam Veterans’ Memorial Wall.  It is safe to say there was not a dry eye there as the long overdue honor to the 3,095, from Ohio, who lost their lives in Southeast Asia, while in service to their country, began. 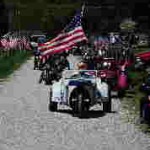 In the short span of 90 days, the nearly 2000 riders had come together to honor our fallen warriors.  In the immediate months following the first annual run to the wall, Veteran’s representing all Ohio organizations began planning the second run to take place July 24 and 25, 2010.

The expanded two day event will be hosted at Clay’s Park, Canal Fulton, Oh., where all day and evening activities include food, vendors, live entertainment and Veterans’ Support Groups displays.

Two programs are planned on July 24th at the Ohio Vietnam Veterans’ Memorial, ceremonies from 2:00 to 3:00 pm and a Candlelight Vigil at 7:00 pm.

And, oh yes, the flags will again be waving.