Home WarZone US War Plan: Talk about Thermonuclear Bombs But Use little...

(San Francisco) May 11, 2010 – Politicians and talkers of all sorts drone on endlessly about Global Thermonuclear Weapons and suck all the oxygen out of a room when you’re talking about any other subject.

Reliable sources say nuclear war targeting requires about 300 actual nukes. The thousands of nuke weapons in the inventory in addition to the required 300 are pointless overkill for politicians to prance around about. They go on and on about reducing the gross number of nukes that are ready to go. It is all an absurd and ridiculous theater for ignorant civilians who are fooled into thinking politician X or Y has done the world a favor. 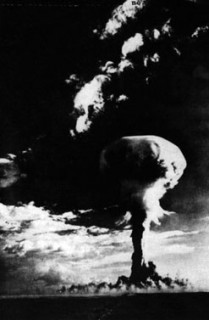 It is great for fast talking politicians. Nuke weapons talk builds Fear. It is great in the run up to elections. Fear makes people vote stupid. It is the same everywhere.

American Liberals and conservatives can’t handle the truth about nuclear war. Nothing wrong with that. Most people can’t. People will talk in circles forever to avoid the truth or just plain go and hide.

The Pentagon, the American civilian political leadership and the CIA led anti-nuke front groups encourage the confused, misled and beguiled American people to talk about global thermonuclear weapons all they want. Ever helpful officials will even happily send all kinds of slick PR to “facilitate” energetic, endless, pointless discussions about thermonuclear weapons. Weapons that will never be used.

Why do they do that?

Well, actually it is because the big thermonuclear weapons from the ever useful B-61 Dial-A-Yield right down to the 155mm atomic cannons that would kill or maim almost everybody on Earth are a convenient diversion from the real Nuclear War American Military Forces are tasked to fight in the Middle East, Central Asia and Asia right now – every day.

The DOD and the American political and economic leadership have no intention of using the thermonuclear bombs – Hydrogen Bombs, though. They are cover for the actual, on going, 20 year old, covert Nuclear War being fought with hundreds of thousands of tons of nuclear munitions like the weaponized uranium 30mm shell and plain old dumb bomb. Not to mention the very high tech, patented and JDAMed GBU 39; but then, it is just a skinny version of a dumb bomb that can fly.

In overall terms of radiation, though, the Nuclear War on the Middle East, Central Asia and Asia is the equivalent of hundreds of thousands of Hiroshima or Nagasaki sized Nuclear Bombs. Even those weapons, way back in 1945, were just a big depleted uranium poison gas bomb with a very small built in nuclear device for dispersion.

If you are or were in the last 20 years of American wars, and in theater on the ground, you probably got zapped with radiation. The worst part is, it never goes away. You will carry the radiation legacy with you till you die. That is just the way it is. It’s like Agent Orange and it’s radioactive. The worst of both worlds.

There is no easy way to tell definitely, though. It requires a Laboratory with a Mass Spectrometer and a Geology attachment; there are only about 50 of those in the world.

Of course, the civilian populations are the targets. They number in the billions and war fighters are drawn from their ranks. The weaponized uranium gas does its deadly job as a force multiplier on them, too. Fertility, health and intelligence are negatively affected by the poison gas.

From Kabul to Baghdad to Mecca to Jerusalem there is nothing like weaponized uranium gas and aerosols to put a crimp in people’s style and zero out men and women’s fertility. The annual Monsoons send the lethal radioactive poison to India and China, the future enemies of the US Military.

About three million faithful Muslims a year make the journey to Mecca on their personal Hajj and sample the radioactive dust from the war zones and Kuwait.

The winds take the deadly gas molecules everywhere; weaponized uranium has even been found in the Antarctic. Pres G W Bush’s attack with weaponized uranium gas took nine days to ride the winds to England. The US Forces’ poison gas is worldwide in a year. The stuff just gets more deadly the more finely divided it is – not safer. You can’t dilute this poison enough.

Knowledgeable sources put the radiation burden at many millions of Becquerels per square mile in the target areas. Monsieur Becquerel was one of the early French pioneers in radiation physics. Today it is just bad, real bad. There is no way you can be in theater and not get that poison on you and in you. Worse, of course, if a person happens to live there. There is no escaping it.

The US Military’s nuclear munitions were developed by the reconstituted and renamed Poison Gas Committee from WWI. They were approved for use by the WWII Manhattan Project. Individual assassination with nuclear methods was approved in the 1950’s. Nuclear munitions were field tested in the 1973 Arab Israeli Yom Kippur War. The heavy duty industrial base to manufacture, transport, “test” fire, store and ship nuclear munitions was put in place in the United States over the decades since 1945.

Unfortunately, the radiation poisoning is world wide. But, how do we know the purpose of the Long Nuclear War of choice? The US Livermore Nuclear Weapons Lab and the US Army know exactly where the radioactive aerosols go on the wind. The US Military and political leadership know the purpose. One thing is unmistakeably clear: The weapon of Choice, Uranium Oxide, is a War Crime and is Genocidal.

Livermore Nuke Lab and Picatinny Arsenal work for the DOD and the Commander in Chief. The crashing Sperm Concentration of men in New Zealand, Switzerland and Israel and many other countries from the US Military firing weaponized uranium is just collateral damage; too bad, just the way it is.

The most incredible thing is that Iran, the former Yugoslavia, Pakistan, Afghanistan, Azerbaijan, the ‘Stans, Saudia Arabia, Kuwait, Israel, India, China and other nations are in a Nuclear War and the people there don’t even know it.

Do the leaders of all these countries know they are in a Nuclear War? That is a good question and everybody is entitled to their own opinion. What everybody is not entitled to are their own facts. They do have one thing in common: Their countries are being Genocided by the US Military.

Uranium oxide as a weapon stands by itself as whole countries crumble before it and the US onslaught. Acknowledged or Denied, it makes no difference to the Uranium; it makes you sterile, it cripples you, then it drops you like a stone. Depending on how much you get, it takes anywhere from months to years.

The fact that it will kill the US, too, is irrelevant and beside the point. As the old saying goes “He who dies with the most toys wins.”

Fertility Associates, “The “quality” of New Zealand men’s ejaculate has halved over the past two decades – The most dramatic drop of any western country.” New Zealand, Newsletter, http://tinyurl.com/338fgcn

Bob Nichols is a Project Censored Award winning writer and a San Francisco Bay View correspondent. A former bomb maker in a U.S. government factory in rural Oklahoma, he reports on the two nuclear weapons labs in the Bay Area. He can be reached at [email protected]