Home Veterans Get Guv’ment off our backs … but not yet

It’s fashionable to be mad at the government these days, but many folks are unclear about how to join the movement.

The first step is to master the idiom of outrage. It’s not just government, it’s Big Government. Or even better: Big Guv’ment. 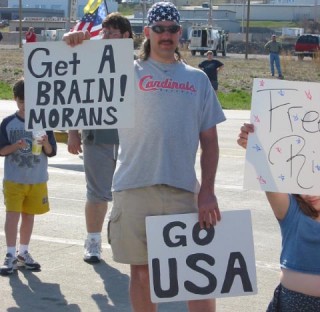 Huge, clunky, intrusive, exorbitant — that’s Uncle Sam. Get off our backs, get out of our lives and let go of our wallets!

The sentiment has been around for 234 years, but never before did we have the Internet to make it feel so fresh and original. Every red-blooded patriot should aspire to a life that’s more or less free of government, which apparently can’t do anything right.

Let’s begin with health care. President Obama should immediately abandon healthcare reform and turn the whole confusing mess back over to the insurance companies, with no federal rules or supervision.

Wouldn’t that be swell?

The problem with such a bold plan is Medicare, which funds critical coverage for many millions of older Americans. Technically it’s a humongous government program, one of the worst drags on the deficit.

But if you got rid of it, lots of people who can’t afford to pay for private insurance would grow sick and die, and a public uprising would take place. Even some crotchety Tea Partiers depend on Medicare.

So, OK, leave that one alone. But, otherwise, government doesn’t know squat about health care!

Now let’s talk about this so-called “financial reform” that the President keeps pushing. Big Guv’ment has no business meddling with our venerable Wall Street banks and brokerage houses, even though they brought the country to the brink of a catastrophic depression. Heck, everybody makes mistakes.