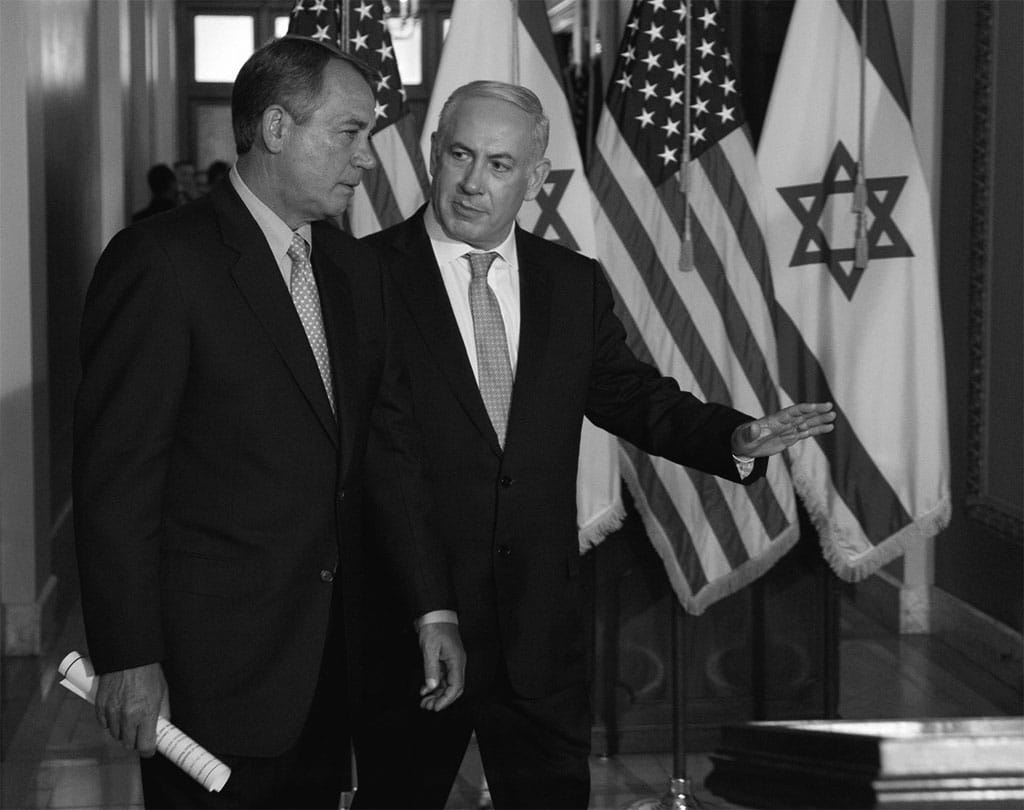 “Step two, “shock and awe” for Iran followed by a full scale invasion that, according to military experts directly responsible for drawing up our war plans, requires the fall of Pakistan, its “Balkanization and the military occupation of Baluchistan as a staging area.”

AIPAC, the Israel lobby used to, well, we don’t exactly know what they are “used to” but every politician in America is terrified of it for some reason, claims to have total control over the new congress.

It isn’t a “Jewish thing,” AIPAC got rid of 6 Jews who were too “pro-American” for their tastes.  The last thing it is about is the security of Israel, a regional bully, a small land of ICBMs, germ warfare labs and warehouses loaded with American munitions which they sell around the world.

Israel and its thuggish “American” lobby terrifies a lot of people, congress, journalists certainly and as Noam Chomsky continually points out, its own citizens.

There is a real threat against Israel, one they perceive but many Americans are unaware of yet.  Israel is terrified of a new 9/11 investigation.  Even Noam Chomsky, top critic of many Israeli policies, had always stopped short of debunking 9/11.  He was their last line of defense, Chomsky and Jon Stewart, pseudo-progressive “hand puppet.”

“The explicit and declared motive of the [Afghanistan] war was to compel the Taliban to turn over to the United States, the people who they accused of having been involved in World Trade Center and Pentagon terrorist acts. The Taliban…they requested evidence…and the Bush administration refused to provide any,”

Chomsky doesn’t come out and say “Israel did it.”  However, he does point out that the attack on Afghanistan was illegal and that there has never been a shred of proof that anyone in Afghanistan had ever been involved in 9/11 at any time, not Osama bin Laden, not the Taliban, nobody.  In fact, when it came time for America to submit proof to justify attacking Afghanistan, America began a series of subterfuges that have left the United States branded an aggressor and criminal state.

When 9/11 moves away from Afghanistan, one of the two targets Israel gave us after 9/11, with the veritable flood of secret intelligence from the Mossad guiding Bush 100%, Israel is faced with real risks.  When you look outside Afghanistan, you look at terrorist organizations long penetrated by Israeli intelligence, perhaps even under the control of Israel as with many of the groups now active in Yemen.

If this door is opened, if an honest investigation begins, Israel will quickly move from “trusted ally” to “rogue state” and “suspect number one.”  Iraq and Afghanistan have been found innocent.  9 years has found no massive underground complex such as the one the Mossad told America of in Afghanistan or the weapons labs and secret stolen nuclear weapons they “convinced” Bush and Rumsfeld to invade Iraq for.

The other “job” the new congress was hired for is to destroy Iran.  With America’s military stretched to the limit, exhausted from 9 years of civil wars, occupation, and endless “wheel spinning” in Afghanistan and Iraq, the Neo-con boondoggles of all time, the new “wet behind the ears” Israeli controlled legislators are expected to fall into line, recognizing who owns them.

$1.2 billion dollars bought the new congress, laundered drug money from Afghanistan and Mexico, Federal “bail-out” tax dollars, “recycled” into buying even more bailouts but mostly money tied to Israel and tied to war.  The one issue every Tea Party member was silent on, orders from the top were a war on Iran.  This is the cost of their office, sending 400,000 troops that America doesn’t have to fight a war against an enemy 3 times larger than Iraq, one whose military wasn’t already 90% depleted as was Iraq in 2003?

Not only doesn’t America have a large enough army to fight in Afghanistan and keep our other obligations around the world, but we are also shy 250,000 men, even with every national guard and reserve unit used, all troops from Korea and Europe deployed and maybe even police and fire departments nationalized and put under federal control.

This is the military and manpower capabilities of Iran, according to the Central Intelligence Agency (2008)

THERE ARE ALMOST 13 MILLION ARMED IRANIANS!

Those 20 million “illegal aliens” living in the United States are likely to be much more popular if Israel gets their wish.

Notwithstanding that Iran has never attacked the United States nor every threatened to attack the United States and has proven repeatedly that it has no nuclear program, Israel is demanding of that its members of congress support a war against Iran, one that doesn’t involve a single Israeli soldier, exactly as with Iraq and Afghanistan, the two other surrogate wars we are fighting for Israel.

Is Israel planning to pay the estimated $2 trillion dollars they are asking America to spend or compensate the families of the 40,000 troops we are expected to lose?  Thus far, nearly 500,000 Americans who served in Iraq and Afghanistan are either being compensated for war-related disability, military or veteran retirement and Social Security.  Are we aiming to make it an even million?

MORE OF WHY ISRAEL IS TERRIFIED OF 9/11

Taking the clock back to September 2001, just after the 9/11 “incident,” I use this term as far as we have proven, 9/11 may well have been some sort of mind control of mass hysteria.  Actually, this seems to be an apt description of the governments’ position on 9/11 or so we thought.  Now I am not so sure what the government really thinks.  This is how Wired magazine reported it then:

When the terrorists who commandeered the four airplanes in the Sept. 11 attacks were identified, their faces appeared in news publications all over the world.

President Bush has said he has evidence that Osama bin Laden was behind the attacks, so it would seem obvious that the FBI would include him and other suspects on its 10 most wanted fugitives Web page.

Bin Laden is listed, but only for the 1998 bombings of U.S. embassies in Tanzania and Kenya. There is no mention of the 1993 World Trade Center bombing or the attacks on the USS Cole in October 2000, both of which he is widely believed to have orchestrated. And forget about Sept. 11.

The reason? Fugitives on the list must be formally charged with a crime, and bin Laden is still only a suspect in the recent attacks in New York City and Washington.

“There’s going to be a considerable amount of time before anyone associated with the attacks is actually charged,” said Rex Tomb, who is head of the FBI’s chief fugitive publicity unit and helps decide which fugitives appear on the list. “To be charged with a crime, this means we have found evidence to confirm our suspicions, and a prosecutor has said we will pursue this case in court.”

Larry C. Johnson, a former CIA officer who was deputy director of the U.S. State Department Office of Counterterrorism from 1989 to 1993, said in a Sept. 12 interview conducted by Frontline that there is no concrete proof that bin Laden is responsible for the USS Cole and the 1993 WTC attacks, but bin Laden celebrates those attacks and associates himself with people who are responsible for it.

President Bush promises to reveal evidence linking bin Laden to the suicide hijackers who attacked the World Trade Center and the Pentagon.

The Wall Street Journal’s Washington Blog lays out a case for how far out of control the demand for a new 9/11 investigation has gone.  With folks like Jon Stewart still referring to those who want the truth as “lunatics,” even though, in a recent poll by the Herald Sun of Australia (10,000 responses) 77% of citizens there believe 9/11 was an “inside job.”  That’s right, not a 200 phone call sampling, 10,000 responses and nearly 8 out of 10 in agreement.

Does Jon Stewart know what the 9/11 Commission members themselves said?  Perhaps he should learn:

Additionally, the Washington Blog has a few members of congress that are, according to Stewart, “lunatics.”  Check the list carefully, it will be surprisingly bipartisan:

To this list, we can go on and on, top intelligence officials, top military leaders, diplomats, even former FBI director Louis Freeh called the 9/11 investigation a coverup:

“No wonder the 9/11 families were outraged by these revelations and called for a ‘new’ commission to investigate.”

CONGRESS AS TERRORISTS, CONGRESS AS CONSPIRATORS, WILL THIS BE AMERICA’S MOST TREASONOUS CONGRESS?

Hundreds of thousands of Americans received emails last week claiming a “false flag” nuclear attack on the United States had been predicted on the network cartoon show, The Simpsons. Emails blaming the “Illuminati” and including links to a video viewed over 200,000 times in a few days, were included.  Terrorism and nuclear holocaust had become humor but something more.  Warnings of “false flag” attacks, orchestrated by Israel, to push the US into war with Iran had moved from “fringe” internet sites to corporate intelligence reports.  Rumors began spreading not through chatrooms but through military and law enforcement circles.

This humorous depiction, released in a video that quickly went viral, released on all the “right” email lists, through the Tea Party, “Birther” and “Islamophobia” groups, had a purpose other than to inform and entertain.  Real warnings about “false flag” attacks had gotten “too close to home” and needed to be discredited.  Tying space aliens or the “Illuminati” to them is an attempt to poison the message, using “spin” to push the views of what is likely a majority of Americans into an area that can be contained, under the label of “fringe” or “conspiracy theory.”

Clever people were trying to put the toothpaste back into the tube.

This is the job of the new congress also, to head off any investigation, financial crimes, espionage, illegal foreign influence and, especially, 9/11.

Step one, kill any possibility of a new investigation that will permanently damage the relationship between the United States and Israel.

“Step two, “shock and awe” for Iran followed by a full-scale invasion that, according to military experts directly responsible for drawing up our war plans, requires the fall of Pakistan, its “Balkanization and the military occupation of Baluchistan as a staging area.”