The western analysts and think tanks strongly support the drone strikes in tribal areas bordering Af-Pak for obvious success in terms of friend and foe casualties’. They project the drone as the most important weapon to eradicate terrorists and terrorism. They believed that drone strikes have disrupted insurgent operations, complicated their communications and supply lines, and forced key leaders to go underground. 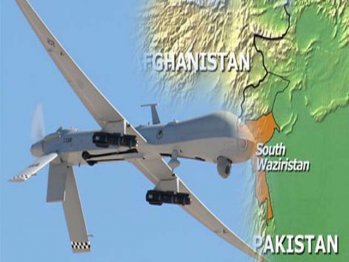 A US based analysis term 2010 as the year of drone, their reports give a figure of 120 attacks in 2010 vis-à-vis 51 in 2009. This shows a sharp increase when compared with under ten drone strikes in first four years of reported drone strike in FATA since 2004 . US journal terms 2010 a year of big success when over 18 senior ALQ and Taliban leaders were confirmed killed through drone strikes. The drone strikes have increased the anti-Amercanism in Pakistan society and the region. The terrorists have used the collateral damage to maximize the environment and society to their benefit .

Pakistan Army fighting WOT under General Kiyani had come a long way from low popularity level due to its political role to its present strength amongst the people of Pakistan. An international survey conducted to understand the FATA situation revealed that Pak military operation in tribal areas is now considered a step in right direction. The percentage of the people favoring military operation has been increasing from 16.7% in 2009 to 66.8% in 2010. Success of military operation in Swat, repatriation of IDPs and Army contributions in floods made the difference.

Army has left no stone unturned to improve its image. During flood relief activities Army collected and distributed 68,000 tons of rations, including 23,000 tons of rations  from its own quota and  deployed 60,000  troops for rescue and relief efforts. But all these efforts of Army to enhance its stature in society are now being sabotaged by the tactical drone strikes of its partner.  In Pakistan society drone attacks are popularly believed to have caused even more civilian casualties than is actually the case. The persistence of these attacks on Pakistani territory is continuously creating public outrages and alienating people from government and Army. The drone is a tactical weapon and has certainly given good results tactically to support coalition forces operation on their sides of the border but strategically history has many unanswered questions.

Historically, the drone strategies used by US are similar to French aerial bombardment in rural Algeria in the 1950s, and to the “air control” methods employed by the British in the Pakistani tribal areas in the 1920s.However it has more resemblance with the recent 2005-2006 Somalian crisis against the forces of Islamic courts. The strikes though killed the militant targets but the public anger over US’s power usage solidified the power of extremists. This eventually led to Ethiopian military intervention giving rise to regional insurgency and offshore piracy. The security dynamics of the area remain complex having far future implications.

Planned killing of Al-Jabouri the commander in Mosul by suicide bomber after failing in at least five previous attempts shows their mindset. Society and environment remain the main area of concern both for LEA and Terrorists to shape up their future strategy. The solution may lie in looking for joint benefit and strategy for the coalition partners and pursue them under umbrella of confidence. This is a war of hearts and minds for peace around the globe. Are we looking to defeat the terrorist or the terrorism is a trillion dollar question.

Seeing is believing, words must follow actions to give space to confidence. If we decide to support democracy we must give weight to democratic decisions on drone attacks. This war can only be won through a clear strategy taking care of interests of stake holders through joint effort, mutual respect and collective confidence. Biden’s visit has left behind some good thinking on addressing Pakistan’s concerns, which will win the hearts but actions must follow to satisfy the mind.

A must read to know details of deaths by Drones.

Pakistan: How Long Will This Go On?