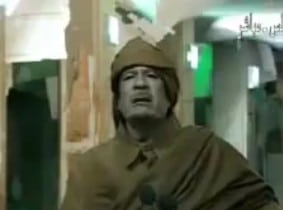 Behind Al Qaeda in North Africa there are Sarkozy and Netanyahu, who is in control of the CIA embassy in Tunisia where the fake ‘Al Qaeda videos’ were manufactured with the help of the harkas (traitors) of Algeria

US terror ally Mummar Gaddafi blames same fictitious ‘Al-Qaeda’ organisation for unrest in Libya
The revolution for freedom which started in Tunisia is fast spreading to several other Arab countries, such as Egypt, Yemen, Jordan, Libya, Algeria, Bahrein, and so on. It is not true that those are revolutions for European democracy which is a corrupt, capitalist, militaristic and repressive political system where votes are bought, and is a system based on the manipulation by a Zionist-controlled media. If anything, they are revolutions to dismantle those systems imposed by those corrupt European capitalist democracies and to replace them with a free and fair system appropriate to the peoples of those countries.

Zionist Muammar Gaddafi speaking the language of his masters in Tel Aviv about fake ‘al Qaeda’ in Libya (official translation). Does it not sound like mad dogs Netanyahu, Clinton, Sarkozy, Cameron and Merkel when they insult Muslims and Islaam ? Make this video goes viral on the internet. Jazakum Allah kheyren

In an attempt to avoid such a revolution in ‘Saudi’ Arabia, the Saudi pro-West European dictators are increasing the salaries of Arabs in the democratic process of buying votes and acceptance of tyranny and corruption. Hence, the term ‘pro-democracy protestors’ is a complete misnomer and merely used for propaganda purposes.

Those revolutions are about freedom, justice, the liberation of Arab countries, including Palestine, the establishment of a pan-Arab economic system much less dependent on West Europeans and a defence force to better defend Arab countries from the aggression and occupation they have been experiencing for nearly a century.

Lockerbie and US terror friendship with Gadhafi
As the predominantly Muslim Arab world reels under its peoples’ will to free themselves from pro-Zionist terror regimes, we hear the same Western and pro-Western European rhetoric of Al-Qaeda to justify the massacres and persecution of Muslims at home and abroad. The uprising against US-supported Gadhafi’s Libyan regime is no surprise.

Gadhafi has been in power for 42 years. At one point, when his policy changed to denounce the US and Israel, he was branded the « mad dog of the Mediterranean ». On 15 April 1986, the US bombed the Libyan Capital Tripoli in an attempt to assassinate Gadhafi. They missed him and murdered his 15-month old adopted daughter Hanna instead. They accused Gadhafi of the Berlin discotheque bombing in 1986 and of supporting freedom movements, such as the IRA which wanted a unified Ireland and the removal of what they regarded as British armed terrorists from Irish soil, which the West Europeans branded as terrorist organisations.

Although there are clear indications that the bombing of the Pan Am Flight 103 over Lockerbie, Scotland, on 21 December 1988 may have been the response of Iranians (and Palestinians) after the US Navy’s guided missile cruiser The USS Vincennes shot down, earlier, an Iranian Air Flight 655 on 3 July 1988 over the Strait of Hormuz in the Persian Gulf murdering all the crew and passengers, the US, who originally pointed the finger at Iran, shifted against Gadhafi and Libya for the Lockerbie bombing and even named the suspects they wanted to try.

After years of sanctions and with the intervention of Nelson Mandela, the Libyan leader allowed the two suspects to be released to Scottish custody, tried in the ‘neutral’ Netherlands in 2000. One suspect was freed but Libyan agent Abdelbaset Al-Megrahi was convicted in 2001 on the most doubtful uncorroborated ‘recollection’, 12 years earlier, of the Maltese tailor Tony Gauci who allegedly identified Megrahi buying (in Malta) the clothes allegedly used to conceal the bomb.

So flimsy was this evidence that even many parents and relatives of the victims did not believe Megrahi was the culprit (Ref. Robert Fisk & Mrs Irvine whose brother, Bill Cadman, was killed in the crash).
On 15th Oct 08, the High Court gave Megrahi leave of appeal to the Criminal Appeal Court against his conviction on the ground that a miscarriage of justice may have occurred. This appeal, which would have exculpated Magrahi, was never to be heard in 2009 because Megrahi (who is still alive) was, in the meantime, released on compassionate ground because he was terminally ill with prostate cancer.

This saved the justice system a lot of embarrassment and the authorities would have had to look for other suspects. Parallel with Megrahi’s release, British Petroleum had clinched a deal worth billions of dollars to explore oil in Libya, while Gadhafi and the US had become new friends. Gadhafi also benefited many other juicy deals for him and his regime, including a Chair on the United Nations Human Rights Council, which includes the US, the greatest human rights violator of all – how vulgar!

Now, the US want Libya out without stating on what ground Gadhafi’s Libya was admitted in the first place. Surely, if the tyrant Gadhafi is toppled, why should Libya be removed from the HRC? On the contrary Libya should remain as the people are fighting for their rights.

Surely, the terror friendship between Gadhafi and US was not destined to last. The Libyan people opted to throw out the pro-US, tyrannical and oppressive Gadhafi regime where no political parties are allowed. The European West never campaigned for the freedom of the Libyans. They armed the regime to repress the people. The same arms, tanks, fighter planes and so on, are being used to murder protesting Libyans in the thousands like Palestinians are murdered by the European Israelis against whom no sanctions have ever been enforced.

To legitimise such genocide, Muammar Gadhafi made out he was fighting Osama Bin Laden and Al-Qaeda just like the US did when they put the blame of the 9/11 sophisticated military-precision attacks on the non-existent organisation. Gadhafi has clearly been well-trained by his masters. In a twist in the whole affair, Gadaffi’s Justice Minister Mustafa Abdel-Jalil now speaks out against Gadhafi alleging that he had ordered the Pam Am Flight 103 bombing over Lockerbie in a clear European Western strategy to promote him as Gadhafi’s successor.

Stealing assets of the Libyan people

When US President Obama says « By any measure, Muammar Gadhafi’s government has violated international norms and common decency and must be held accountable », he fails to mention Israel and fails to point out that Gadhafi is his agent, bearing in mind that any sanctions will affect the people and not the Libyan regime. Similarly, when Switzerland, Germany, the US and other European countries freeze Gadhafi’s assets, they are effectively stealing the assets of the Libyan people like they did for Iran when the Shah was toppled.

They will subsequently use those illegally frozen assets as a bargaining chip with any new government. This is one aspect which clearly demonstrates how they use the capitalist system and globalisation to subjugate countries. When people denounce capitalism, they are branded as anarchists. The Gadhafi’s story is not over yet? At the same time, people should also ask themselves why the West Europeans have gone so quiet on Robert Mugabe of Zimbabwe. Why not freeze his assets too? How about freezing the assets of the Saudi dictators and tyrants?