Contemporary world has witnessed new heights of coercive diplomacy. A public statement by President Obama declaring Raymond Davis a diplomat and asking Pakistan for his repatriation was overkill; indeed it was a diplomatic faux pas. American media was forbidden to mention the killer’s connection to CIA; ‘free and fair’ media faithfully obliged the government, until British media spilled the beans.

Washington suspended all high level contacts with Islamabad; called off a planned bilateral meeting between the foreign ministers on the sidelines of ‘Munich Security Conference’; dropped Pakistan from the crucial trilateral talks of Pakistani, Afghan and the US foreign ministers; Pakistan was conveyed that Zardari’s visit to Washington was uncertain and that Obama’s planned visit to Pakistan might not go through. 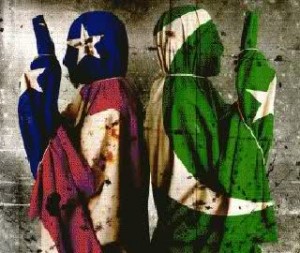 Pakistan’s ambassador was summoned and intimidated by the National Security Advisor that he will be kicked out if Davis is not handed over to the US. Threats of suspension of economic aid and future cooperation were given amid indications that the strategic alliance between the two countries was also at risk. Attitude of the American embassy was rather insensitive. No regrets were expressed over the brutal killings, no condolences were conveyed to the families of the deceased and little concern was shown for public sentiment.

Though John Kerry visited Pakistan, offering belated condolences and expressing remorse at the loss of life; this was too little too late. Apparently concerned that Davis’s continued detention and interrogation might blow his cover and expose his dubious activities, the attitude of State Department became extremely arrogant, harsh and bullying. Probably Davis knows too much about the American campaign of special operations aimed at destabilizing Pakistan to justify its denuclearization by force. Moreover, his connections with fissile material and biological and chemical warfare materials’ trafficking matters indicate that Davis was in the process of setting up something too big and too dangerous.

There are speculations that Davis was a member of a ‘Special Mission Unit’, based in Pakistan’s vicinity, with the objective of making plans and preparations to seize Pakistan’s nukes, if and when necessary. His task was to develop intelligence, contacts and agents in furtherance of his unit’s mission. May be the individuals he killed somehow knew too much about his plans and refused to fall in line with him; whereby Davis had no choice but to kill them irrespective of the cost. There are a number of theories circulating about the identity and credentials of the slain duo as well as Davis. Two days before Davis went on killing spree, the US Embassy had forwarded its annual lists of diplomatic and non-diplomatic staff in Pakistan to the Pakistan’s Foreign Office.

Raymond Davis was not on the diplomatic list. The day after the incident, the US Embassy resubmitted a revised list adding killer’s name to diplomatic list. When Pakistani police took Davis into custody, he had an ordinary American passport with a valid ordinary Pakistan visa, issued by the Pakistan Embassy in Washington. A day later, Pakistani police was approached by a Lahore Consulate staffer in a hush hush manner to exchange that passport with another one. The new passport was a diplomatic one with a valid diplomatic visa stamped by Pakistan’s foreign office, sometime in 2009. However, police did not oblige. Prosecutors have presented two letters from the US Embassy as evidence before the Lahore High Court.

The first letter, dated January 27, reads: “Davis is an employee of the US Consulate General Lahore and holder of a diplomatic passport.” The second, dated February 3rd, states that Davis is a member of the “administrative and technical staff of the US Embassy Islamabad!” This sort of mysterious and indiscreet handling of the issue has diminished the chances of any alternative solutions to the impasse which could have been possible if the matter was handled by the American side discreetly and prudently. Unfortunately, pragmatism was the first causality right on the onset of crisis. Under Pakistani law, there is provision for “Blood Money,” i.e. that the next of kin can accept monetary remuneration and pardon the killer.

Despite pressure, families of ill fated Zeeshan and Faheem have refused to accept Blood Money. In fact, anti America sentiment is running so high that local wealthy businessmen have publicly urged them to refuse, with the promise that they would match any sum offered to them by the US. Then rumours were floated that the US might reach an understanding with Pakistan for a swap over of Aafiya Siddique with Davis. However, Aafiya’s family refused to accept such proposition, and spoke to media and the government to not to release Davis in exchange with Aafiya. Tehreek-e-Taliban Pakistan (TTP), known in the US media as the Pakistan Taliban, has issued a warning to the Pakistani government of dire consequences if Davis is released.

This indicates that suicide attacks, murders and turmoil could follow his release; even the judges involved in such decision could be targeted. Pakistanis are reminded once again that Pak-American relations, like always, hang by a thread and Pakistan can be jettisoned any time if it refuses to fall in line. A recent survey by Gallup Pakistan has pointed out that 70% Pakistanis consider America as greatest threat to Pakistan’s sovereignty.

People in the street perceive America as an arrogant, war mongering super power which foments trouble and destroys countries. They are also angry with the US over drone attacks and have been demanding immediate end to these illegal attacks that have claimed hundreds of civilian lives. Jeremy Scahill in his article “The Secret US War in Pakistan” states: “At a covert forward operating base run by the US Joint Special Operations Command (JSOC) in the Pakistani port city of Karachi, members of an elite division of Black Water are at the centre of a secret program in which they plan targeted assassinations of suspected Taliban and Al Qaeda operatives, “snatch and grabs” of high-value targets and other sensitive action inside and outside Pakistan.” Pakistani military had concluded a long time ago that the TTP was being aided by sort of free-wheeling “contractors” that Davis represents.

Last year the US pressurised Pakistan to accept about 500 of “Davis types” without any background checks. Americans have yet once again shown poor understanding of Pakistan’s ground realities. Currently there is an impasse. Public pressure leaves little room for any compromise. The US State Department, having mishandled the issue now needs to act more sensibly and back off to let the tempers cool down. More threats would further worsen an already bad situation. Hillary Clinton was ill advised to pursue such a rasping policy in full public view. Pakistan has not buckled under intense US pressure; it is also not impressed by the American posturing. Majority of Pakistanis believe these to be empty threats.

This cowboy style of handling the Davis issue is in line with “The Ugly American”, a best seller of yester years, and a very successful movie. This profile is a sort of prefect encapsulation of the dysfunction at the heart of the US-Pakistan relationship, and the failure of American policymakers to recognize it.

About the Author: Air Cdre Khalid is Masters in Political Science along with War and Strategic Studies. He has also done Air WarCourse, Fellow of Air War College. Instructor’s Course. Senior Command & Staff course. Combat Commander’s Course. He has been a Directing Staff at various institutions of Pakistan Air Force. Presently he is a visiting faculty at: