One has to wonder how Obama will review the new Israeli demand and how he will weigh his chance of re-election if he refuses to do so? 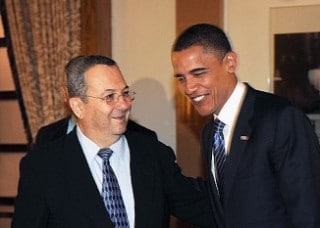 Ehud Barak, the Israeli defense minister in Bibi Netanyahu’s government announced to the Wall Street Journal that Israel would seek $ 20 Billions in upgrade for its already existing $3.2 Billions annual defense grants. It seems the Arab winds of freedom and democracy is another chance for Israel to milk the US cow for more money. That should not be a big problem since the US Congress with its Republican leadership and with some one like Eric Cantor representing Tel-Aviv and not Richmond, VA in the American Knesset West will surely help in this regard. If the toppling of dictatorships in Tunisia and Egypt is worth $20 Billions for Israel, one has to wonder what the price the US has to pay Israel for a regime change in Libya, Yemen, or Syria?

Over the years, and since the US began to sponsor Israel, its wars, its occupation, its economic development, its settlements, its immigration policy, its ethnic cleansings, its house demolition, its targeted killings, its land and water theft, the US has contributed some $120 Billions so far and counting. The total costs to the US for its support of Israel and if we are to include the War on Iraq, sponsored by the Israeli lobby and the costs in terms of boycotts and oil prices, the costs jump to over $ 3 Trillions, the same amount of the US deficits.

With the US in deep financial trouble with both the president and Congress pledging substantial budget reduction specially in domestic programs, and with a promise from Obama in his State of the Union message to carefully look at every line item in the budget and “eliminate programs we can’t afford and don’t work” one has to wonder how Obama will review the new Israeli demand and how he will weigh his chance of re-election if he refuses to do so?

One need to keep in mind, that Obama who was willing to cut down on so many domestic programs willingly pledged $30 Billions over 10 years and was willing to give Israel twenty F-35 if Israel agrees to freeze its settlement program for 3 months. The Economist in its 16 November 2010 made such a joke of the offer that it titled it essay “ Twenty F-35 not to build trailer park”.

In a 26 February, 2010 Huffington Post article titled “ Why the US can’t afford military aid to Israel” Josh Ruebner gives some very intersecting figures what the American people can do with the $30 Billions Obama pledged to Israel. Josh mentions 364,000 affordable vouchers for low income household families, 887,000 early reading programs for high risk kids, and 498,000 green jobs, a major achievements for any US president, but then the beneficiaries are not US citizens and voters they are Israeli citizens and voters, something the Obama White House is keeping an eye on in the next election.

World wide Israel is able to raise more than $ I Billions a year from world Jewry according to reports of the IMF, this is in addition to what Israel gets from the US every year. American Jewish community is considered by all as the largest single contributor to Israel especially when it comes to its settlement policies and when it comes to sponsoring the armed Jewish thugs and trespassers who are almost totally dependent on US Jews for their daily livings.

While the US Justice Department, Home Land Security, Treasury Department, IRS have special offices and teams numbering in the thousands tracking donations and money raised by Arab and Muslim Americans for charities, and the same is true of American Jewish leadership and special American Jewish organizations dedicated to tracking and every single dollar raised by Arab and Muslim Americans in the US, there is total disregards for the hundreds of millions of tax exempted dollars that are going to armed Jewish terrorists groups running wild and lose in the Occupied West Bank terrorizing Palestinian families, destroying their homes and farms, poisoning their water wells and killing their live stocks and burning their schools and mosques.

According to David Ignatius of the Washington Post there are 28 major American Jewish organizations that are active in supporting and sponsoring “Jewish settlements” in the Occupied West Bank.  Not only the American taxpayers are milked but also the very poorest of Americans are taken to the cleaners by American Jewish tycoon operating BINGO games in California. Irving Moskowitz who is the largest operator of BINGO in California is the largest financial contributor to Jewish settlements specially those in East Jerusalem.  He is not alone; Ira Rennet of the Rencco Group is also one of the largest donors and contributor to Jewish settlements.  I guess when it comes to Israel there is nothing wrong with milking the US Treasury and milking the poorest of poor in America. As always, I am sure both Obama and congressional leadership will welcome such an additional request from Israel and find a way to milk American tax payers one more time.

ABOUT THE AUTHOR: Sami Jamil Jadallah, Born in the Palestinian city of El-Bireh ( presently under Israeli Military Occupation). Immigrated to the US in 62. After graduating from high school in Gary, Indiana was drafted into the US Army ( 66-68) received the Leadership Award from the US 6th Army NCO Academy in Ft. Lewis, Washington. Five of us brothers where in US military service about the same time. Graduated from Indiana University with BA-72, Master of Public Affairs-74 and Juris Doctor-77, and in senior year at IU,was elected Chairman of the Indiana Student Association. Sami Jamil Jadallah is an international legal and business consultant and is the founder and director of Palestine Agency and Palestine Documentation Center www.palestineagency.com and founder and owner of several business in technology and services.