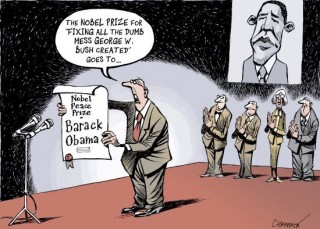 ‘War on Humanity’ moniker perpetuated and expanded by Mr. Obama, Nobel peace prize laureate, that began with every U.S. President since Woodrow Wilson c.1917. Obama masking an inexplicable zig zag and nefarious bellicose dynamic.  Currently numbers three illegal wars against sovereign nations. Consequently, including indigenous peoples SHRILLS OUT that the U.S. for the past century is not a republic but rather a manufactured flawed and failed democracy. Operated under absolute control and effectuated by a private corporation entity for ultimate world control greed profit and confiscation of labors and property.

“No nation can survive treason from within”Marcus Tillius Ciceroc.106Bc -c.43BC. No nation that relegates itself ‘second class position status’ to a private corporation entity or to a foreign country can ever hope to be a sovereign nation with rights to self detemination. Therefore, the executive branch takes second position by parroting behind the scenes pronounced flawed century old ideology of a racist military war criminal culture.

By Mr. Obama’s irrational asymmetric third war, impudence, manufactured fake self anointed arrogance, and total disregard of the US Constitution, International Laws, and all inherent humanitarian rights to self dignity. Additionally, Mr. Obama confirms absolute racist war criminal status along with an illegal bi-partisan bureaucratic apparatus of self deprecating cronies. The regime blares out extreme shrills of fear and annihilation. Furthermore, the U.S. repeats ad nausea in the second decade transforming the 21st Century into a racist ‘war on humanity.’ More than 1.5 million defenseless civilian men women children have been systematically murdered by US racist wars against Afghanistan, and Iraq. Read facts here projectcensored.org

Gordon Duff of Veterans Today outs the crony self deprecating U.S. second class position of corroborating relationships. “Today, Libya’s Colonel Gaddafi is fighting to stay in power, subject to renewed UN sanctions and a NATO air assault. Few know his checkered history and the decades of “cooperation” between Libya and the covert operations of the United States, Britain and Israel, assassinations, arms dealing and, most of all, drugs.” Posted by Gordon Duff

No nation that relegates itself and its citizenry ‘second position status’ to a private corporation entity or to a foreign country, under the dual monikers, ‘select exclusive special interest group,’ can ever define itself a sovereign free nation of the people, by the people, and for the people with rights of self determination. Conversely, by accelerating shakedown of the U.S. taxpayers labor, assets, and property self determination is ignored. “Israel to seek $ 20 Billion more U.S. in aid” Posted by jonathonturley.org

Furthermore, the U.S.has been disconnected from sovereign nations since c.1910. The subjugated citizenry is totally blinded by broken down bureaucracy and a corrupt regime operating above the supreme law of the nation. Daylight U.S. heist by military force is now on a trajectory of self implosion by its self anointed advanced march on world destruction for assets labor and natural resources in behalf of a private corporation bank Federal Reserve Corporation and a select exclusive foreign country Israel. Read objective subject matter here “Depleted uranium a strange way to protect Libyan civilians” Posted by David Wilson Global Research

The Sherman Anti-Trust Act c.1890 here the US Constitution here Article 1, Section 8 is circumvented in c.1910-1913 by enactment of a private cartel corporation or monopoly the “Federal Reserve Corporation.” These iconic laws were effectuated to place solid barriers for sovereign national free self determination.

Therefore, for 100 years U.S. sovereignty has been usurped and the entire masses of American citizenry is subjugated. A private entity operating to the detriment and against the will of ‘We the People.’ Subjugation theft and confiscation by a criminal cartel operating in the shadows and above the law. An unelected official first and foremost notable private government power. See documented details of Independent bank and individual entities who own the Federal Reserve Corporation. The total and absolute control of all systemic levers of U.S. and global economic and financial value wealth assets property and labors directed to other ‘select exclusive special interest. Read list here.

A private power superseding the election by ‘We the People.’ An impudent regime corroborating a pretext bureaucratic apparatus that enforces through global, militaristic, theft, confiscation, genocides, and extreme fear.. Resulting in subjective total fear that masks the dictims and cant of an existing shadow cartel.

The existence and confirmation of crime organizations operating all levers of power behind the shadows. Sherman Anti-Trust Act creates a law enacting barriers and constraints to monopoly, cartels, and conspiracy regarding all matters of trade or commerce thereby strengthing the position of the U.S.sovereignty. A nation of supreme laws of the land including a nation ‘We the People’ who are self determined to freedom liberty and free speech revoked dismissed and ignored.

Notwithstanding, “Every person who shall monopolize, or attempt to monopolize, or combine or conspire with any other person or persons, to monopolize any part of the trade or commerce among the several States, or with foreign nations, shall be deemed guilty of a felony”

Furthermore, on conviction thereof, shall be punished by fine not exceeding $10,000,000 if a corporation, or, if any other person, $350,000, or by imprisonment not exceeding three years, or by both said punishments, in the discretion of the court.

Side Note: Barring outside interference to monopolize trade or commerce domestic or foreign the U.S. Treasury operating under the US Constitution Article 1, Section 8, there would exist a sound root foundation of a transparent financial and economic dynamo system. A system functioning in a free market atmosphere unencumbered by rigged markets and degenerate corruption. A genuine capitalist system that generates wealth for the nation and its citizenry welfare exclusively.

The patina of paramount freedoms liberty and national sovereignty is tarnished beyond recognition. While reality documents daily of a non-existent sovereign nation operated by unaccountable, unauthorized, megalomaniacs and sociopath crime organizations under the alibi of “Too Big To Fail.’

Notwithstanding, the circumventing of the U.S. Constitution and Sherman Anti-Trust Act chronology as indicated above the U.S. sovereignity has retreated 180 degrees in the opposite direction from a stellar Nation of Laws to a privately controlled rogue criminal organization regime. A private cartel operating outside all boundaries of domestic and International laws.

Consequently, the illogical outcome of U.S domestic and global war against humanity and eliminating competition cannot be argued or defended. Therefore because we cannot defend or argue illegal war to eliminate competition and assault against humanity to confiscate labor and assets. U.S. belligerence dismisses all opposition as irrelevant including individuals, groups, entity, nations, forums given a terrorist status.

There is no one to pronounce the onus of accountability to broken down U.S. regime, or call transparency to halt all belligerent hostilities. Certainly no entity, man, creed, or science will enforce sovereign or International Law against these rogue regime perpetrators. In a latest benign article written to address the solutions to the current demise of the U.S. Constitution. Author writes: ‘The time has come for those who claim high regard for the U.S. Constitution to show that they mean what they say. The time has come to begin impeachment proceedings against President Barack H. Obama for high crimes and misdemeanors.” Posted by John V. Walsh “Impeach Barak Obama”Good luck on this particular effort in futility against U.S. outrageous racial war crime organization and corrupt domestic regime.

“Obama is already teetering on a tight rope of obvious hypocrisy but he has taken a dramatic politically revealing step, with this decision, of being the titular voice of the New World order which could care less about American congressional approval and uses the UN and NATO to justify its illegal preemptive and self serving military and financial imperialistic interventions.” Posted by Allen Roland at Veterans Today

The Federal Bureau of Investigation exposes their contrived ability. The agency is dysfunctional by attacks and absolute contempt for individuals, entity, nations, or creeds that would attempt or dare to offer competition against the autonomous authority of organized crime cartel and the monopoly regime they dutifully represent. Subsequently, the FBI by pathetic alibis of terrorism document and self admit to the world that indeed the U.S.is controlled by a private cartel that monopolized all competition. Subsequently, confirming the counterfeiting of fiat scrip is a monopoly operated by a cartel demonstrating the U.S. is not a free sovereign nation of ‘We the People.’

“Defendant Convicted of Minting His Own Currency”STATESVILLE, NC—Bernard von NotHaus, 67, was convicted today by a federal jury of making, possessing, and selling his own coins, announced Anne M. Tompkins, U.S. Attorney for the Western District of North statement as follows, paragraph: “Attempts to undermine the legitimate currency of this country are simply a unique form of domestic terrorism,” U.S. Attorney Tompkins said in announcing the verdict. “While these forms of anti-government activities do not involve violence, they are every bit as insidious and represent a clear and present danger to the economic stability of this country,” she added. “We are determined to meet these threats through infiltration, disruption, and dismantling of organizations which seek to challenge the legitimacy of our democratic form of government.”

“No nation can survive treason from within” Marcus Tillius Cicero. Therefore no nation can survive defiance, impudence, and criminal organizations illegal broken down systemic regime apparatus. A failed corrupt apparatus of false obnoxious ideologies. Blatant example of projecting false narrative propaganda here “Obama says “U.S should be proud of Libyan involvement.” Mr. Obama following his dutiful strict abeyance of directives from a secret shadow regime orders military satraps to another racial war, death, and destruction for conquest while looking at his constituency with disdain and contempt.

By blaring out deliberate and insidious change of his diction and cant with a sly cadence, delivery, and speech Mr. Obama transformsa nation into a rogue lawless asymmetric militaristic corrupt regime. An unaccountable threat to itself and all humanity on the planet. Depleted uranium that the U.S. is now expending on DU tipped-ordnance across the spectrum of ‘Divide et Imperia’ world domination will last for 4.5 billion years. While Japan’s natural disaster destruction of nuclear power plants distributes throughout the global atmosphere radiation particles over the entire planet earth.