Home Government CPT MAY: The Birther Nation of Ghost Troop 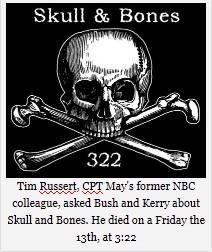 HOUSTON, 4/17/11 — Ambitious and arrogant Donald Trump has focused the nation on the eligibility of Barack Obama (aka Barry Soetoro) for the presidency, and with every new interview his growing accusations inspire the Right, and enrage the Left.

The questions Trump is trumpeting in his brazen baritone should have been answered before the man some are calling the “Kenya Kid” was anointed in the infamous “Skull and Bones” elections of 2004. In that bizarre contest, Bonesman Bush and Bonesman Kerry ensured that the War Party would remain the only partly in power.

As with most issues, I’m cynical about this one, having read and lived enough history to know that demagogues (Trump, some say) and pretenders (Obama, some say) are common critters in the wicked world. If there can be a canine credo for such as me, it is this:

When people use innuendo, insults or incarceration to curb debate they are hiding the truth in defense of a lie.

Accordingly, I am a triple troublemaker: a truther, a denier and a birther. I shall remain so until someone convinces me otherwise — and they will have to do it with fact-based theories, not fear-based threats. An example is the best description:

‘I propose to write a strong essay in support of Donald Trump’s airing of the Obama birth issue, formalized Thursday by Arizona legislation requiring that future presidential candidates prove their U.S. citizenship in order to be placed on the state’s ballot.

‘I am convinced that this is BO’s Achilles heel, and that the controlled Left is being coaxed along in blind trust of an American pretender president, one who has lived down to every negative opinion we expressed about him in the first month after his election.’

“Captain May: I strongly disagree with this advice. Donald Trump is one of the worst right-winger opportunists on the planet. How in the world could you support this know-nothing, unconstitutional, undemocratic asshole.

“I thought you were a progressive man, a man who stood with the people, not with corporate America and their New World Order. If you continue on this tirade, I shall stop all contact with you, and write you off as just another right-wing birther junkie who refuses to acknowledge the truth.

“This is unbelievable. I had such respect for you before this email. Now I wonder if I have been bamboozled by your crowd all these years. — A FORMER Ghost Trooper”

‘I regret the indiscretion of one of my staff in circulating my private correspondence, which has prejudiced you against my still-to-be-written essay.

‘I am not a follower in the Trump movement; rather, I am a leader in the Truth movement. I was one of the signatories of the 9/11 Truth Statement in 2004, when many feared to make an open declaration against the Bush regime. I am now moved by the same Socratic spirit that guided me then.

‘I must say, yours is a peculiar kind of virtue, which moves you to vituperate a man on his deathbed without adducing a shred of evidence to prove that he is wrong. Your email is a sad example of the animosity generated by this issue, which could be settled by the production of a single document, a birth certificate. For heaven’s sake, my dad had to show YMCA officials my birth certificate before I could play pee-wee football!

‘Thank you for your past service with the Holy Horde. The actions that you and GT Cindy undertook, in the aftermath of the July 28, 2005 Ft. Monroe/Charleston false flag attempt against Texas City, were heroic. I was always proud that Ghost Troop could boast of having two women who had stood their ground against the Secret Service.’