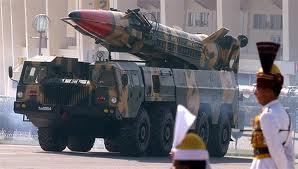 Nothing will diminish American power over Pakistan faster than exposing that 9/11 was an inside job, and the American people themselves would have a better chance to get back control over their lives from an imperial agenda that does not serve their interests either.  The whole world would get a chance at peace.

US troops will be deployed in Pakistan if the nation’s nuclear installations come under threat from terrorists out to avenge the killing of Osama bin Laden, the Sunday Express can reveal on Sunday.

The plan, which would be activated without President Asif Ali Zardari’s consent, provoked an angry reaction from Pakistan officials last night. Barack Obama would order troops to parachute in to protect key nuclear missile sites.

These include the air force’s central Sargodha HQ, home base for nuclear-capable F-16 combat aircraft and at least 80 ballistic missiles.

A reader in New Delhi, India, Prof. Syed A R Zaidi, emailed  the following to this writer:

It is time for the Pakistani political and military establishments to get together and come clean about 9/11. It is clear that 9/11 was an inside job – see the free book “9/11 UNVEILED” at www.twf.org for a quick survey of the evidence.  Pakistan should invite leading scholars associated with the 9/11 truth movement such as Prof Steven Jones and Prof David Ray Griffin to present the evidence to an international audience, and set the grounds for an investigation by the General Assembly of the UN as suggested by Iranian president Ahmadinejad.

Nothing will diminish American power over Pakistan faster than that.  It is immaterial if Osama was dead in 2001 or if he was killed in Abbottabad just recently.  Either way, as the FBI admits, there is no evidence to tie Osama to 9/11.  The sworn testimony of FBI translator Sibel Edmonds tells us that right up to 9/11 Osama was doing the CIA’s work in Sinkiang against China.

Given that 9/11 was an inside job and that Osama had nothing to do with it, the US presence in this part of the world and all their actions against so-called terrorism are naked imperialism based on a tissue of outrageous lies.  Let Pakistan make this known in a concerted way.

The news would be bound to filter back to the seriously deluded American public despite America’s controlled press, and the American people themselves would have a better chance to get back control over their lives from an imperial agenda that does not serve their interests either.  The whole world would get a chance at peace.