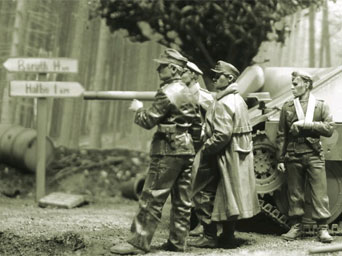 In the early 1980s, I was working in the Library of Congress in Washington, D.C., doing research for my trilogy called “Lebensraum”, narrating my family’s flight from the Ukraine in 1943 under the protection of the retreating German forces.   There, I came upon an article describing the last major World War II battle between the German Wehrmacht and the Russians that took place, as I remembered it in fragments, in the vicinity of Berlin.  I was caught in its midst as an eight-year-old child when it happened.

In my memory, I see the various events pertaining to that battle much like a slide show – there is no continuity. I was too young to have understood that what I experienced, and escaped, were the death throes of what mainstream media now distorts as the well-deserved outcome of a despicable dictatorship right in the heart of Europe.

Here is what I remember.

There were four of us still of my once-extended family. In years past, long before I was born, there had been hundreds of relatives – aunts and uncles, grandparents, cousins, neighbors distantly related to us –

…all of them gone, exiled to Siberia, executed, starved to death in two Soviet famines, left frozen by road in a desperate scramble to escape Stalin’s Red Terror that had menaced my people for decades.

Now there was only my grandmother left, whom we called Oma, (translated, Granny) my sister Wally, four, my pretty mother, then in her very early thirties, and I.

And, no, to set the record straight up-front, I am not a yammering Jew. I am proudly German by background, born in the Ukraine, now a naturalized American. My people were called “Volksdeutsche” by the Reich for centuries – ethnic Germans who had left their homeland five or six generations ago, who were now retreating back into the Fatherland with the Wehrmacht as Germany was losing the war.

In the article I found at the Library of Congress, the slaughter I am about to describe was called the “Battle of Halbe”. I don’t remember the City of Halbe itself – I remember two towns in the vicinity, villages actually, called “Kausche” and “Greifenhain”. I remember both places quite vividly, albeit with gaps in-between.

Kausche first. We had landed there after a harrowing escape from Poland, right before Warschau fell to the Soviets in 1944. We were desperately trying to reach the gates of Berlin, but we got stuck in this village called Kausche.

In those desperate last weeks of the war, refugees were flooding everything and often sleeping in the churches, schools, or even outside by the road, but we had lucked out – the mayor of Kausche had assigned us to a single room at the end of a barn which might have been the servants living quarters in days past. One small, smoky room – but at the very least, we had shelter.

The four of us shared our quarters with a hugely pregnant woman called Frau Weber and her chubby daughter, Erika, age ten.

The main house was opposite us, and to the side was a third building that I remember only because a young German soldier, for some reason never explained to his hysterical mother who tried to save his life, was willy-nilly executed on its steps a few weeks later by some Russian. He was left lying on those steps for days, for no one was permitted to touch him.

But I am getting ahead of my tale. It may seem strange today, but in those chilly April days of 1945, we all still believed that the war could be won by the Germans – and would be won in no time! That’s what Dr. Goebbels still promised in a widely broadcast radio message, most likely his last – and doubt would have been heresy.

Frau Weber’s husband was at the Eastern front and believed missing. He had come home on furlough, and now she was expecting and waiting to give birth. Erika and I had formed a somewhat guarded friendship, because Erika – a big girl for her age – shamelessly bossed me around.

I was skinny and scrawny, no match for Erika. I both admired and loathed Erika, for she was quite pretty in an aggressively flaunting way, which made me ill at ease. She once pulled up her sweater and showed off what was happening already to her chest – two tiny buds the size of small cherries. Nothing like that could be found on my chest, which was clearly a serious shortcoming.

The next memory I have is that the horizon in the distance turned suddenly a very fiery red. I am not talking about some puny little sunset – it was wall-to-wall red, the most spectacular sunset on earth! Somebody surmised with a frown that perhaps Berlin might have been set on fire by yet another bombing raid.

In retrospect I do not know if what we saw burning was Berlin or if it was another city nearby that was being bombed to shreds by the Allies. We saw this horizon, set aflame by the enemies of what we called our Vaterland, night after night after night – for weeks, as I remember it!

Then a distant rumbling started, and we could see huge clouds of black smoke bulging in the East. It sounded and it looked as though a thunderstorm was heading toward us.

At that point Frau Weber announced in her blustery way that she was about to give birth. She left Erika in Oma’s care and walked on foot to wherever she needed to go, and on foot she came back after another few days, carrying a little mewling something that Erika announced was her new baby sister, whose name I have forgotten. Maybe it never had a name? At any rate, Erika was preening herself, which made me even more jealous of her.

Very shortly afterwards, Erika and I were “playing marbles”, as we called our little game – flipping little glass beads in the dirt – when we noticed a small troop of civilians come racing down the road. A woman with two teenage boys and several small girls, each on a bicycle, stopped near us, out of breath, and shrieked at us that we should run:

“The Russians are coming! The Russians are just about here!” The Russians were already at the outskirts of Kausche, they told us, knees flying and lips trembling, and they were pillaging, burning, raping, murdering whatever happened to be in their path!

Erika and I just stood there, staring. They jumped back on their bicycles and took off like some people possessed.

Run we did – but not very far. I don’t remember if I ran with my family or if it was just Erika and me – but what I do remember, clearly, is that we made it to the outskirts of a forest, and there, with his back against a tree, sat a dead German soldier, nicely uniformed, doubled over, still cradling in his lap the head an equally dead comrade who lay sideways in the grass, legs sprawling awkwardly.

After that, there is a blank. Maybe a day? Maybe only hours?