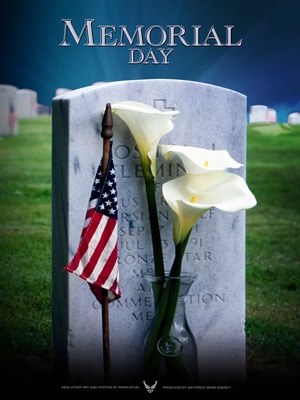 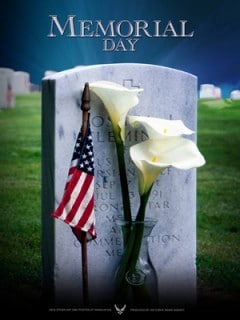 Could it be that we have lost the true cost of war as we morn its dead ~ could it be that flowers and flags can never justify the inhumanity of war ~ could it be that all wars are lost because there are no true winners and lastly, why are we not questioning H.R. 1540 ~The Forever War Act of 2012 as Ron Paul most certainly is.

Here are some thought provoking quotes and thoughts to mull over on memorial Day 2011 and then a must see 5 minute video of Ron Paul speaking on the House floor about the death of the Republic as Defense Authorization Act H.R. 1540, aka The Forever War Act of 2012, was recently overwhelmingly approved. The law authorizes the United States to use military force anywhere it says there are terrorists, including within the borders of our own country. It represents the largest hand-over of unchecked war authority from Congress to the executive branch in modern American history.

The founders of our Republic were seriously opposed to handing this much power over to the executive branch, fearing tyranny. If enacted into law, this provision will make Obama a dictator who can wage war anywhere and without the consent of the American people and it’s duly elected Congress ~ and many in the past have warned of the danger of an out of control war making machine.

President Eisenhower most certainly warned us all about the out of control  military/industrial complex but here is a 21st century updated thought provoking warning by Joe Rogan that War is a Racket ~ with X rated language, so be so warned. Nine minute video

And of course, CNN loves war! The whole channel is designed to make war seem dramatic and inevitable, because it makes money ~ as seen in this 5 minute video on its fake CNN Gulf War reporting.

When people say “support the troops” but aren’t fighting to bring them home and keep the criminals who run these wars in check, I wonder how serious they are about helping anybody. Others have expressed the same doubts about war  ~

“We have grasped the mystery of the atom and rejected the Sermon on the Mount. Ours is a world of nuclear giants and ethical infants. We know more about war than we do about peace – more about killing than we do about living.” ~  WWII General Omar Bradley

“I want you to remember that no bastard ever won a war by dying for his country. He won it by making the other poor dumb bastard die for his country.” ~ WWII Gen. George Patton

“In war, there are no unwounded soldiers”– Jose Narosky

“It can never be lawful for a righteous man to go to war, since his warfare is in righteousness itself; nor to accuse anyone of a capital charge, since it makes no difference whether you put a man to death by word or by sword, since it is the act of putting to death which is prohibited. It is always unlawful to put a man to death.” ~ Lacantius

“Individuals have international duties which transcend the national obligations of obedience. Therefore (individual citizens) have the duty to (refuse to obey) domestic laws to prevent crimes against peace and humanity from occurring.” ~ Nuremberg War Crime Tribunal, 1950

“We must kill them in war, just because they live beyond the river. If they lived on this side, we would be called murderers.” ~ Blaise Pascal (17th century mathematician and philosopher whose father lost his entire savings because of France’s national bankruptcy caused by the debt incurred during the religious Thirty Years War)

“If you had seen one day of war, you would pray to God that you would never see another.” ~ The Duke of Wellington (celebrated for being the victorious British general at the Battle of Waterloo, June 1815)

“I confess without shame that I am tired and sick of war. Its glory is all moonshine. It is only those who have neither heard the shrieks and groans of the wounded, who cry aloud for more blood, more vengeance, more desolation. War is Hell.”~ Civil War Union General William Tecumseh Sherman who orchestrated the infamous scorched earth policy that terrorized the Confederacy in his “March to the Sea” in 1864.

“Wars throughout history have been waged for conquest and plunder and it is the working class who fights all the battles, the working class who makes the supreme sacrifices, the working class who freely sheds their blood and furnishes their corpses, and it is they who have never yet had a voice – in either declaring war or making peace. It is the ruling class (the “plutocrats”) that invariably does both. They alone declare war. They are continually talking about patriotic duty. It is not their patriotic duty but your patriotic duty that they are concerned about. Their patriotic duty never takes them to the firing line or chucks them into the trenches.” Eugene Debs, antiwar activist, union organizer and Socialist candidate for president who was sentenced to 10 years in prison for speaking out against WWI. He received a million votes as a 1920 write-in candidate for US president while he was in jail!

“Military power is as corrupting to the man who possesses it as it is pitiless to its victims. Violence is just as devastating to the soul of the perpetrator as it is to the body and souls of those who are victims of it” — American Friends (Quakers) Service Committee

“All through history it has been the nations that have given the most to generals and the least to the people that have been the first to fall.” ~ Harry Truman

“All that was required of them (i.e. the brain-washed masses) was a primitive patriotism which could be appealed to whenever it was necessary to make them accept longer working hours or shorter rations. And even when they became discontented, as they sometimes did, their discontent led nowhere, because, being without general ideas, they could only focus it on petty specific grievances. The larger evils invariably escaped their notice.” ~  George Orwell 1984

Well, here is a larger evil which is evidently escaping the notice of many Americans on memorial Day ~ but not Congressman Ron Paul standing alone on the House floor who calls The Defense Authorization Act or H.R. 1540 (aka The Forever War Act of 2011) ~ which was overwhelmingly approved by the House of Representatives on May 26th by a vote of 322 to 96 ~ “the Last nail in the coffin of our Republic“… but is anyone really listening?  Five minute video.

“To sin by silence when they should protest makes cowards of men.” – Abraham Lincoln

Drivers Course: The Biela Center, 4545 Midlothian Turnpike, Crestwood, will host a Rules of the Road class at 1:30 p.m. Information: www.cyberdriveillinois.com.