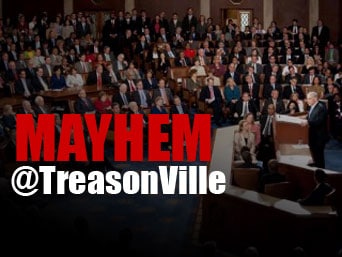 What more can be said about the performance last week in the Capitol Building by the agents appointed by Israel to represent the interests of Israel in our Congress? It was by everyone’s reaction a remarkable performance.

Twenty-nine standing ovations for one of the most overbearing, obnoxious and lying homicidal pricks in the world, in support of his attack on the US president who wants him to give back some stolen land to the hapless Palestinians. Most of the clappers were in the president’s own party!

I don’t think anything like it has been seen anywhere since before the breakup of the Soviet Union. Back then, we’d see clips of party members applauding endlessly at the tyrant’s remarks. You couldn’t stop clapping until a high party member stopped. If you stopped too soon, you could disappear. Same thing in DC. If your clapping for an Israeli tyrant stops too soon, you could disappear in the next election.

Maybe you’d heard about it before, but the former congresswoman, Cynthia McKinney, revealed on Iranian television last week that all candidates for the House and Senate must sign pledges to support Israel’s military superiority. If they don’t – no Jewish money and a guarantee of defeat in the election.

Is there a political solution to this alien takeover? Both of the anti-war “maverick” Republicans, the darlings of the Libertarians and hard money believers, the Doctors Paul, pere et fils, said last week that Israel must be supported, or that Israel’s enemies must not be supported, or some such groveling. So Cynthia McKinney was right. There is no exception to the rule. The politicians can’t save us and let’s stop pretending they can.

Now, if you think about it, the only reason we have TSA in the airports is because of Israel. Because of our support of Israel. We’re in fear of Israel-hating Moslems who want to kill us all.

No one in his right mind has this fear, but there could never have been the so-called threat of terrorism if it weren’t for Israel.

This fake fear has produced the nastiest agency in the constellation of nasty agencies. Employing the abusive low-lifes of American society, the Transportation Security Administration is something that only the American government could produce.

The TSA has never caught a terrorist since its debut almost ten years ago, in the immediate aftermath of 9/11. It also has also never failed to catch a terrorist, since there has been not one terrorist event in all that time. According to the FBI, 9/11 itself was not a terrorist event, as Director Robert Mueller admitted that they had no evidence of any hijackers on board the four planes. And those four “hijackings” justified the creation of the TSA, which makes it an organization based on fraud.

Most if not all federal organizations are based on fraud or on the violation of the US Constitution. The usual fraud we encounter is that these organizations are in fact private corporations domiciled in places such as Puerto Rico and Delaware. But that’s not what I’m talking about. I’m talking about something really blatant such as the Bureau of Alcohol, Tobacco and Firearms (ATF).

How did we get such a bureau that deals with the three items in its name, in complete violation of America’s basic law? We got it because in this American society the people who go into politics for a living are parasites and scum. They do what they’re told by the people who pay for their election victories. They sign pledges to support the military superiority of Israel. They vote for totalitarian bills that they don’t bother to read, because the resultant laws are what American Jews in power (e.g., Lieberman, Levin, Harman, Schumer) want us to have.

Fraud is the specialty of the US government. The world-wide war on Islam is based on fraud and lies.

The Transportation Security Administration has surpassed the ATF in its assaults on the people. The ATF goes after gun owners and gun dealers, plus dissidents and religious non-conformists. Even kills a few. But the TSA is in a different class of aggression, one that treats all travelers as “terrorists.” Fact is, the TSA wouldn’t know a terrorist if it tripped over one.

For example, the TSA is unable to discriminate between a stereotypical terrorist and say, an old lady in a wheelchair. Or a little kid wearing a diaper. With this barefaced ineptitude, how does it have a mandate to be allowed anywhere near an airport, let alone decide who can get on a plane?

Again, there are apparently no stereotypical terrorists for them to intercept, because it appears now and has for several decades that no one is interested in hijacking an airliner. Now that airline pilots can carry guns again, anyone who might be interested isn’t going to get very far.

The terrorists that come to my mind are the ones who deal in stark, raving terrorism such as renditions, dungeons, torture and murder. The ones who come to my mind work for the CIA and the Mossad. These are actual terrorists. Two actual agencies of state-sponsored terror are the CIA and Mossad but the TSA lets them get on airliners with normal passengers.

So maybe what happened in Texas last week shouldn’t surprise us. Well, it was surprising that the Texas House of Representatives voted unanimously to prohibit the TSA from committing anymore sexual assaults against passengers in its lascivious feeling-up their erogenous areas and its forcing passengers to submit either to that or to radioactive X-ray machines owned by Michael Chertoff and his Israeli buddies.

When it came to the Texas Senate for its vote, though, the CIA got involved. The CIA’s man in Texas, Lt. Governor David Dewhurst, collaborated with the TSA and the Justice Department in Washington and Austin. Dewhurst, the richest man in Texas politics, a Republican, worked quietly with the Obama administration to overthrow this bill in the Texas Senate. Just as in the lower house, the vote in the senate was unanimous to make the TSA’s sexual assault policy a felony.

Thirty out of thirty senators were prepared to outlaw sexual attacks on passengers. But Dewhurst, as the lieutenant governor, had the thirty-first vote. One to thirty was good enough.

Dewhurst’s specialty in the CIA was overthrowing governments in Latin America. That’s what he’s trying to do in Texas. He also tried to swear the senators to secrecy as he worked with the Justice Department’s lobbyist on the senate floor and exploited his CIA background to persuade the senators to change their votes.

David Dewhurst crafted a letter, supposedly from the TSA, that said to the Texas Senate that if it voted for this bill to criminalize TSA behavior that the TSA would declare Texas a “no-fly zone,” exactly as it did to Iraq following Operation Desert Storm and as it is doing to Libya now. No passenger flights into or out of Texas would be allowed!

Under international law, this is termed as an act of war. Senator Dan Patrick, in Dewhurst’s party, described him as a traitor to the State of Texas and to the United States. He is nothing more or less than a traitor.

The TSA is another CIA front, as is its parent organization, the Department of Homeland Security. It’s all a CIA operation. Traitors working for state terrorists. How can a CIA agent who specialized in overthrowing foreign governments, which always includes kidnap, torture and murder, be allowed to masquerade as the representative of the people in a democratic society?

Of all the nasty things we have to think about, from the Gulf of Mexico catastrophe to the Japanese catastrophe to the threat of a currency collapse to the CIA’s world war against Islam, I found this act of war by the federal government against the State of Texas, this ugly threat to shut down commercial aviation, the most disturbing evidence of the actual nature of the DC government. It is the single best reason that this District of Corruption must be shut down and never allowed to start up again. The so-called American Experiment was a failure. It died in 1861. The Constitution was shown to be meaningless by the first tyrant who ignored it.

Americans are living on myth. They want to believe that this is the freest country of all. Some of the smug ones say, well, where else would you want to live? America – not love it or leave it. It’s shut up or leave it.

Well, I don’t love America. Never did. But it’s where I’m from and I want to clean it up. It’s always been an aggressive, violent country because of treacherous respectable scum such as David Dewhurst, a Republican, a guy who rides some of the best cutting horses in the country because, like Roosevelt, he was born into a rich family and can buy the best. Like his rich colleagues, the Bushes, he went from college into the CIA, where he worked in black operations to overthrow democratic governments.

Riding cutting horses, by the way, isn’t done by cowboys anymore. It’s done by rich dudes who can pay a quarter of a million for a Quarter Horse. You just sit there and hang on. It’s not as if you’re roping and tying calves. It’s the modern version of Averell Harriman playing polo, except that high-goal polo actually required skill.

Reminds me of the German who came over to America for awhile and then went back home. A friend asked, “Did you figure out the American political system?” He said, “I think it’s this way: the poor are Democrats, the middle class Republicans and the rich are Communists.”

David Dewhurst is an American Communist. Not a card-carrying party member, but a part of the nomenklatura, the elite secret government that is able to derail a unanimous vote in the legislature of the biggest real state in the so-called Union. This is not disrespect for Alaska, but you really can’t be a state when you’re on the north side of Canada. Alaska needs to be an independent country with its own policy.

And now Texas is probably thinking the same thing. One thing we don’t need is 535 bloodsucking parasites who signed pledges to support Israel ruling us from an artificial little enclave invented by megalomaniacal Freemasons centuries ago. It isn’t working and needs to be discarded.

Another thing we don’t need is a bunch of low-life sex fiends feeling us up if we don’t want to be microwaved. The main thing we don’t need is treacherous political (CIA) scum working with DC tyrants to threaten a state with an act of war for wanting to protect peaceful passengers from sexual abuse and radiation poisoning.