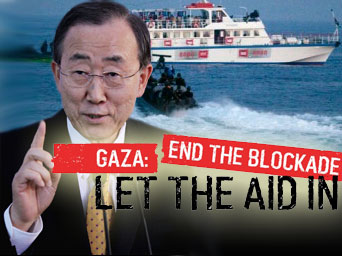 The UN called for “Unimpeded” Humanitarian Assistance for Gaza

So Why is Secretary-General Trying to Scadaddle Latest Flotilla Plans?

It’s in the report of the UN fact-finding mission set up by the Human Rights Council to investigate violations of international law, including international humanitarian and human rights law, resulting from the Israeli attacks a year ago on the flotilla of ships carrying humanitarian assistance to Gaza, during which nine people were killed and many others injured.

“The Mission considers that one of the principal motives behind the imposition of the blockade was a desire to punish the people of the Gaza Strip for having elected Hamas. The combination of this motive and the effect of the restrictions on the Gaza Strip leave no doubt that Israel’s actions and policies amount to collective punishment as defined by international law… No case can be made for the legality of the interception and the Mission therefore finds that the interception was illegal.”

And that wasn’t all. The Mission considered that the naval blockade was implemented in support of the overall closure regime. “As such it was part of a single disproportionate measure of armed conflict and as such cannot itself be found proportionate. Furthermore, the closure regime is considered by the Mission to constitute collective punishment of the people living in the Gaza Strip and thus to be illegal and contrary to Article 33 of the Fourth Geneva Convention.”

The action of the Israel Defense Force in intercepting the Mavi Marmara on the high seas was “clearly unlawful” and could not be justified even under Article 51 of the Charter of the United Nations [the right of self-defense].

So just what did the Secretary-General of the UN, Ban Ki-Moon, think he was doing last week when he attempted to scupper the latest humanitarian effort by sending a letter to governments around the Mediterranean calling on them to use their influence to discourage any more flotillas such as the one due to sail towards the end of June, which he says “carry the potential to escalate into violent conflict”.

A press release from Mr Ban’s office said that flotillas were not helpful in resolving the basic economic problems in Gaza, though the situation there remains unsustainable, and that assistance and goods destined to Gaza should be channeled through legitimate crossings and established channels.

No, Mr Ban. What has been unhelpful in resolving the basic economic problems in Gaza is the yellowbellied failure of the UN to discharge its duty to implement its own resolutions and enforce humanitarian law.

The Secretary-General ought to remind himself of Security Council resolution 1860 (2009), which emphasises “the need to ensure sustained and regular flow of goods and people through the Gaza crossings” and calls for “the unimpeded provision and distribution throughout Gaza of humanitarian assistance, including of food, fuel and medical treatment”.

So what is this talk about using “legitimate crossings and established channels”? Everyone knows that those channels, operated by the criminal blockader itself, are designed to impede the flow of everything and everyone to and from Gaza.

It’s bad enough that the wimp Obama is busy rewriting international law, circumventing inconvenient UN resolutions and trying to give his Zionist friends the green light to keep the Palestinian lands and resources they have already stolen and create opportunities for them to grab more.

But who are you working for, Mr Ban Ki-Moon? Why aren’t you, as Secretary-General, exhorting member states around the Mediterranean to do their duty under the UN Charter and ensure that the aid gets through to Gaza DIRECT?

I hear that back home in Korea Ban’s nickname is “Ban-chusa”, tagging him as a blasted pen-pusher. Some say he’s noted for his subservience. In other words, he’s a yes-man.

As if we hadn’t enough of them already.

If you cannot uphold international law or insist on compliance with the raft of UN resolutions requiring an end to Israeli occupation and a permanent halt to interference with the Palestinian Territories, Mr Ban, you bring the UN into disrepute. You should pack your bags and clear off back to Korea.

The Secretary-General’s spokesman, Martin Nesirky, sings the same tune and says that Freedom Flotillas are useless. He urges the Government of Israel to take further meaningful and far-reaching steps to end the closure of Gaza, within the framework of Security Council resolution 1860, and emphasises that the operation of legitimate crossings must be adequate to meet the needs of Gaza’s civilian population. That’s real bright when everyone and his dog knows you can “urge” Israel all you like but the regime will take no notice until it is forced to. 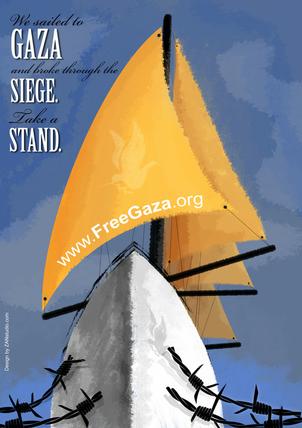 Israel is a member of the United Nations and a signatory to the UN’s Charter, whose principles it happily violates repeatedly. It now plans to continue its crazed defiance of the law, the UN and international opinion by committing the same crime again and blocking the next flotilla. A report today in Ha’aretz “Israel Prepping to Block Next Gaza Flotilla” shows how futile the words of Ban and Nesirky are.

Israeli Prime Minister Netanyahu warns that his military will if necessary use force against anyone who tries to disobey his navy’s orders and head to Gaza’s shore. There is also talk of deploying snipers.

It’s clear that peace-workers and the decent folk of the world cannot look to the UN for action under present management. For all its poncing around it has done nothing effective. So while we wait for Mr Ban to be replaced by someone with guts and gumption, perhaps Mr Nesirky would kindly explain what is so “useless” about a humanitarian flotilla trying to burst through a cruel and illegal blockade that’s operated by a bunch of delinquents who may soon have to answer to charges of war crimes and crimes against humanity? Especially when his employers just sit there scratching their ass.

A letter two months ago to my MP about the need to protect the next Gaza flotilla from unlawful interference has gone unanswered. What arrangements were being made, I wanted to know, to defend these civilians from the sort of murderous harassment on the high seas that caused worldwide uproar last year?

The Med is full of NATO ships at the moment in the service of freedom and democracy, or so we’re told. It would not surprise me if the brass hats have agreed to steer well clear of the area where Israel does its marauding and leave the Zionist extremists free to terrorise and assault the unarmed crews and passengers of a brave little fleet of mercy ships.

My 2 1/2-year-old son, Will, is starting to get the idea of the holiday season. And when his mother asked him what to put on his wish list for Santa Claus, a tree was No. 1.

A Christmas tree in the Holy Land. Nice image, especially this year as Christianity closes the millennium in the land where it began.

We had no idea what we were in for.

In this arid land of conflict and memory, even Christmas trees bend with the weight of history.

Many religious Jews here view them not as a warm holiday tradition, but as a pagan German symbol that speaks of a menacing past. The Chief Rabbinate even ruled it would rescind the “kashrut,” or kosher certification, of any hotel displaying one in its lobby.

So I called Rabbi Yaakov Sabag, chief of the kosher division of Israel’s rabbinate, to find out how a yuletide fir would violate Jewish dietary laws.

His response was, “There are some Jews who find the Christmas tree offensive. It is a symbol, a symbol like a swastika . . . a symbol of the grave history of Christianity in relation to Judaism.” Whoa! We’re just talking about a Christmas tree here, right? go to web site christmas tree store

Many Israeli friends, religious and secular alike, assured us this rabbinical ruling was absurd. To them it was one more infuriating example of the Chief Rabbinate overextending its authority. My neighbor, the learned theologian Rabbi David Hartman, called it “just plain stupid.” I asked Uri Mor, who handles relations with the Christian community for Israel’s Religious Affairs Ministry, if he thought the Christmas tree ban was a sign of intolerance. He did not really answer.

But he informed me that the Jewish National Fund provides free Christmas trees as a gift to all foreign correspondents. The Globe does not allow reporters to accept gifts, so that was out.

Beyond that, Palestinian friends pointed out that the Jewish National Fund carries its own historical baggage. Since the founding of Israel the JNF was the powerful agency carrying out “land reclamation,” as Israelis refer to it, or, in some instances, “land confiscation,” as the Palestinians call it.

OK, so what about going up to see our kibbutz friend, Uri Zelzion? Perhaps he would allow us into the beautiful orchards to take a small tree. christmastreestorenow.com christmas tree store

“What?” he shouted. “You don’t cut down trees in Israel, you plant them.” Chopping down a perfectly healthy sapling pine tree, to put it mildly, cuts against the grain of Zionism. An army of believers in Jewish congregations throughout America pay $10 to plant a tree in Israel.

At this point, we were confused. And desperate.

My wife, Julie, Will, his little brother, Ry, and I set out for the 10-minute drive to Bethlehem, where the real Nativity story took place.

There my wife and I did what we never thought we’d do in our lives. We bought a fake Christmas tree – the kind that comes in a box and has to be assembled. Buying a simulated pine in a town with such a profoundly real connection to the Nativity story made the experience even more humiliating.

Our sons, who actually loved the fake Christmas tree store, were mesmerized by the blinking lights and shiny bulbs on the floor models. We chose a “Fox Tail Fir” complete with plastic pine cones. At $50, we made a healthy contribution to the suffering Palestinian economy.

We brought it home. We struggled to assemble it, and we had fun decorating it. In the end, it looked enough like the trees our son had been drawing in nursery school. He loves it. And in the end, that’s what a Christmas tree, real or plastic, is all about.