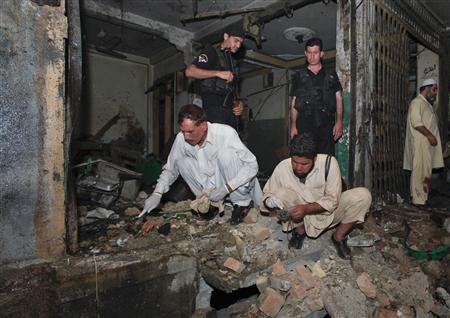 “We did not carry out this attack in Peshawar. It is an attempt by foreign secret agencies who are doing it to malign us,” Tehreek-e-Taliban 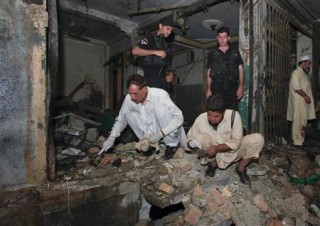 Pakistan’s Taliban on Sunday denied responsibility for twin bomb blasts that ripped through a crowded market in the northwestern city of Peshawar, killing 39 people and injuring dozens.

The attack, one of the deadliest in a series to hit Pakistan since Al-Qaeda leader Osama bin Laden’s killing last month, devastated the Khyber Super Market district which includes a hotel, shops and student accommodation.

“The target of the militants was to kill a large number of innocent people in the busy market and journalists became the victims by chance,” provincial information minister Mian Iftikhar Hussain told AFP.

Abdul Hameed Afridi, chief doctor at Peshawar’s main Lady Readings hospital, confirmed the death toll and said 108 wounded were brought to the hospital overnight, with 47 of them admitted for treatment.

The Pakistani Taliban, who has vowed to carry out attacks to avenge the killing of bin Laden, denied any role in the bombing and said they only aim their strikes at the government and military. “We did not carry out this attack in Peshawar. It is an attempt by foreign secret agencies who are doing it to malign us,” Tehreek-e-Taliban spokesman Ehsanullah Ehsan told AFP on phone. “We do not target innocent people. Our targets are very clear, we attack security forces, government and people who are siding with it,” Ehsan said.