Home Life Jews Zionism and the Stupidity of Bigotry

I guess I’m going to have to retrace my steps, yet again.  Last week I reprise an article on Zionism “Maybe I’m Dumb, but Could Somebody Please Tell Me the Difference Between Zionism and Racism?“.

Due to a response to the article by a young Black man the first time it ran, I found it necessary to write a follow-up article the following week. That seems to be necessary once again.

I try to avoid addressing the same issue in consecutive columns – that’s my only defense against my natural tendency to be tedious and predictable. But this past weekend a young man, let’s call him Rob, came up to me and said, “Brother, I got to give you props – you really stuck it to those damn Jews last week.” As soon as the words came out of his mouth I knew I had to clarify my message by revisiting the issue of Zionism.

I didn’t have the time, at that moment, to stand there in front of the store and explain to the young man that my article wasn’t against Jews, but on the other hand, I wanted to make sure that he understood the distinction between hating a philosophy, and hating a people. So I asked the young man to be sure to pickup the following week’s paper because I was going to write an article especially, and specifically, for him. So Rob, as promised, this one’s for you – and I sincerely hope that God gives me the skill to make my point.

Rob, while my last article had to do with a segment of Judaism, it wasn’t intended as a diatribe against Jews. I’m not against Jews, or any other group of people. I’m against various behaviors.

It would be a pity to go through the pain and suffering that Black people have experience in America and not come out the other end with at least some measure of wisdom. One would think that we would have learned through the blood, sweat, and tears that we’ve shed, that trying to paint any group of people with the same broad brush, whether it’s to say that they’re all good, or they’re all bad, is not only the height of stupidity, but is the very mindset that has caused Black people so much misery here in America.

How can I claim to detest racism, only to turn around an embrace that very same ignorant philosophy?

No, I’m not against Jews, I’m against the injustice of Zionism – a philosophy which dictates that one group of people are entitled to the land of another by virtue of their religious beliefs alone. But while I argue passionately that Zionism is a gross and unjust philosophy, I always keep in mind that all Jews are not Zionists. In fact, many Jews are more adamantly opposed to Zionism than non-Jews.

It’s important to recognize that fact, because efficient thought requires that we always recognize subtle distinctions. While knowledge is power, knowledge can only yield its power when combined with the wisdom of truth. Evident of that is the fact that one of the most prolific problems that we have in this vast world filled with knowledge, is our tendency to circumvent that knowledge through thinking with our brain stems.

Instead using our higher cognitive abilities and taking the time to be precise in our thinking, we find it easier to lob preconceived generalizations at every problem – and more often than not, those generalizations cater to the very darkest side of our nature. Look at what we’re doing with our knowledge in the Middle East.

Instead of using that knowledge to enhance the quality of life for all of humanity, we’re using it to spread death and destruction around the entire world. 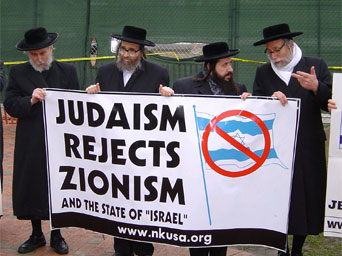 We’ve got to learn to stop thinking in terms of Black and White, Jew and Gentile, or whether a person is Gay or Straight. As long as we think in those terms and continue to antagonize one another, we sabotage every opportunity to form coalitions to fight for our common good. That’s why people like Bush, Cheney, and much of the GOP crowd thrive in a hostile environment.

They love keeping us ignorant, because ignorance keeps us divided, and that very division allow them to step in and conquer all of our hopes and dreams as a people. It is a must, therefore, that we develop the wisdom to understand that there are only two kinds of people in this world – good people, and bad people.

Now, I’m not suggesting that Black people forget their history and engage in a rousing chorus of Kumbaya, that would be fool hearty. But it behooves Black people to not only understand, but remember, that while malevolent White men did indeed place us in shackles, it was malevolent Black men who made us available to be shackled.

We must also recognize that we commit a gross injustice by forgetting the sacrifice, and the families, of the thousands of White men of good character who gave their lives to unlock those shackles.

So while we witness the horror and atrocities that the state of Israel is committing against the Palestinian people and we lean toward condemning all Jews, we must keep in mind men like Joel Elias Spingarn, also a Jew, and a prominent literary figure of his time.

He not only gave great support to the Harlem Renaissance, but helped W.E.B. DuBois to establish the NAACP as a driving force for change in America. Spingarn also established the Spingarn Medal in 1913 – and to this day it’s awarded annually for Excellence in African American Achievement. So as we’re formulating our opinions about Jews, we should remember this man and many others who made great contributions to the African American people.

Spingarn was Chairman of the Board of the NAACP from 1913 until his death in 1939. We should also keep in mind that during that period the NAACP board was predominantly Jewish – W.E.B. DuBois was the only Black man on the Board of Directors. In fact, the NAACP didn’t elect its first Black president until 1975. Think about that.

But it’s become less than politically correct to bring up issues such as these – probably because many of us are afraid of becoming associated with Black opportunist, turncoats, and White apologists like Clarence Thomas, Alan Keyes, Larry Elder, and the like. But it’s important that we keep these facts in mind and pass them down as part of our history.

That’s an invaluable lesson, not only for Black people, but for all of America, because we will never truly overcome until all people of good faith come together as a coalition – and that will never happen until we begin to recognize that true brotherhood is not of the skin, but of the soul.

Religious Bigotry: It’s not that I hate everyone who doesn’t look, think, and act like me – it’s just that God does!  Eric L. Wattree