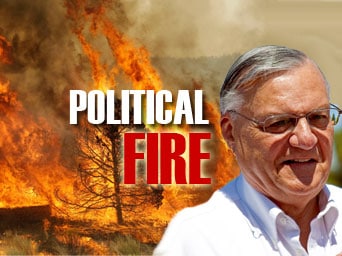 Today notorious Arizona Sheriff Joe Arpaio joined Senator John McCain and announced that the horrific Arizona fires were “likely set by Mexican smugglers” with the operative word be “likely”;  just speculation, no evidence whatsoever. Great!  Another indictment with no evidence!

Knowing dam well that he lives at the epicenter of the new leading state for racism and with his GOP partiers looking to re-ignite the xenophobic immigration issue as an excuse to impose their flame and blame agenda, Sherif Arpaio let it rip.

One glance at the comments posted on the MSNBC story reveals that the racist fire is spreading quickly and the rush to judgement is, like the fire, out of control.

It reminds me when Oklahoma City bomber Tim McVeigh blew up the building and boom, the leading racist talking heads automatically starting blaming “arabs” and lit us all on fire.  Yeah, talk radio was having xenophobic orgasams while  ordinary people were looking for “arabs” to beat up.  It was a special time in America!

Now, that’s not to say that some drug smuggler lurking in the brush is or is not responsible for the fire.  We really don’t know!  No one knows.  For all we know it was Senator John McCain, Arizona Governor Jan Brewer, D.B. Cooper, or Sasqwatch who started it. We just do not know.

What we do know is that politicians in Arizona are well aware of the flames they fan.  They are shrewd and targeted. They know exactly what they are doing.  This is no accident.  The racist fire burns because it’s in their best interest to burn it.

The only questions are;

At this point, sad to say, the odds are more likely that Gen. Colin Powell will appear like a Phoenix rising at an Arizona GOP town hall love fest with a cartoon drawing showing us where these “smugglers” are hiding the WMD’s while Sheriff Arpaio rides his rotund arce to the border to start offing anything that looks brownish while his militias clap all the way to crazyville.

Geez Us!  What a Crashing Bore!

Your comments are greatly encouraged and appreciated.

It’s been a good week for Assemblyman Rudy Bermudez .

Gov. Arnold Schwarzenegger signed Bermudez’s legislation cracking down on doctors who were convicted of being sex offenders, making it easier for schools to have full-day kindergarten and to start a process that would have the Los Angeles and Long Beach ports operating all of the time. web site kaiser permanente locations

“We’ve done extremely well,” said Bermudez, D-Norwalk. “We put bills on the governor’s desk that are important for Californians.” Assembly Bill 1975 requires the Medical Board of California to revoke the medical license of any registered sex offender.

It overturns a federal court settlement that allowed six doctors, who are registered as sex offenders, to keep practicing medicine.

AB 2024 requires the ports of Long Beach and Los Angeles to make recommendations on ways that they can be operated all the time in order to reduce traffic congestion and pollution.

“This is a first step in having our ports go 24 hours seven days a week,” he said.

AB 2407 removes some of the bureaucratic hurdles for school districts that want full-day kindergarten.

Collection sites are being set up at five San Gabriel Valley Kaiser Permanente locations. The Baldwin Park Medical Center, 1011 Baldwin Park Blvd., is open 24 hours. The other four are open from 8:30 a.m. to 5 p.m.

VOTING WORKSHOP: The city of Whittier will hold a free class to assist residents in using the new voting systems from 7 to 8 p.m. Wednesday at the Historic Depot, 7333 Greenleaf Ave., Whittier.

DEMOCRATIC MEETINGS: The Robert F. Kennedy Democratic Club will hold some parties and its regular meeting in the next couple weeks.

Members will discuss the numerous ballot initiatives and evaluate local political races. The slate of nominees for club officers for the coming year of 2005 will be presented by the nominating committee.

The event will be held at the Pacific Palms Conference Center, One Industry Hills Parkway, Industry. Cost is $25 per person.