Home Veterans America is The Biggest Terrorist State of The World 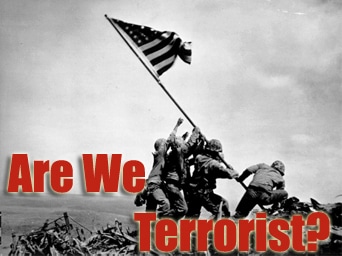 America’s past and present testifies the fact that there is no country in the world matching its destructive oriented policies. The US is the sole country which annihilated millions of inhabitants of Nagasaki and Hiroshima by using hydrogen bombs. Even today no living being in the two affected cities are safe from the thermonuclear aftereffects. Large number of countries had to go through rigors of civil war on account of US intrigues. In its bid to bring down populist elected governments of targeted countries, CIA and FBI secretly provided arms and funds to rebel groups and converted democracy into dictatorship. After making full use of the selected dictator, when he outlived his utility and became a liability, he was branded a traitor and popular movement organized against him. After creating political and economic instability, spreading lawlessness and inducing a civil war like situation, the US forces were pushed in under the pretext of saving the people from the cruel clutches of dictator. Tunes of freedom and democracy were played up full blast. Afghanistan, Iraq and now Libya are cases in point where the people have been deprived of peace and independence.

In order to break-up USSR, CIA first fomented protests against Moscow in Eastern Europe in 1970s by overplaying prosperity and openness of Western Europe and then turned Afghanistan into a battleground. Osama bin Laden (OBL) and thousands of Muslim Jihadis were enticed from all over the Muslim world to promote culture of Jihad against godless communist super power. After accomplishing its objectives, the US abandoned the region in haste and got involved in renovation of Eastern Europe and expanding NATO towards the east. Afghan Mujahideen who had paid the heaviest price in pushing out Soviet troops and Pakistan that had led the proxy war had to go through a long period of trial and tribulation. Left at their own, both Afghanistan and Pakistan were unable to repair the badly bruised socio-economic fabric.

After 9/11, the blue-eyed boy OBL and his holy warriors who were profusely acclaimed by USA and entire western world were declared as most dangerous terrorists. After declaring OBL responsible for attacks on WTC in New York without furnishing any proof, the US destroyed Afghanistan in October-November 2001. Ever since, Afghanistan remains an occupied country and trigger-happy occupation forces have killed tens of thousands of Afghans. Vices that had been purged from the society by the Taliban during their 5-year rule (1996-2001) have resurfaced in a big way.

Iraq under Saddam Hussein was supplied with dangerous chemical weapons by USA for use against Iran in Iran-Iraq war (1980-88). Tens of thousands of Iraqis and Iranians perished in the war which ended without any side emerging as a victor. Later on, Saddam who was given full support for a decade was labeled as a ruthless dictator and falsely charged with storing weapons of mass destruction (WMDs) and having links with al-Qaeda. Under the pretext of locating WMDs, every nook and corner of Iraq was combed by UN inspectors for well over two years. Even though the inspectors gave clear report, Iraq was invaded and destroyed without obtaining UN approval and disregarding world protests.

A massive hunt was launched to locate fugitives Saddam and his sons. His two sons were brutally murdered and their photos splashed on internet. Saddam was eventually traced and after interrogating him and carrying out DNA, denture and medical tests to confirm he was the right person, he was put on trial in a kangaroo court and hanged to death on charges of using excessive force against the Kurds and Shias. Movie of his hanging was also shown on u-tube. 1.6 million Iraqis have died since March 2003 and bloodletting is still continuing.

After 9/11, Pakistan was coerced to become a coalition partner and to combat global terrorism. Pak Army was made to fight own tribesmen in FATA supposedly sheltering al-Qaeda operatives. The flames of war lit in Afghanistan were diverted towards Pakistan. USA pampered and encouraged India to indulge in covert war to destabilize Pakistan which on papers was US close ally and a frontline state. Tehrik-e-Taliban-Pakistan was CIA’s creation which is funded, equipped and guided by several foreign agencies.

Likewise, Baloch separatists are also supported by the same gang. Over 30000 Pakistani civilians and 5000 security personnel have died as a result of foreign sponsored terrorism. Pakistan has suffered an economic loss of $68 billion and its industrial and agriculture sectors and stock exchange have suffered grievously, while foreign investments have ceased. All this has resulted in high inflation, price spiral, and electricity, gas and food items shortages. Barbarity of America didn’t end here. Unending spate of drone strikes in tribal areas has added to the woes of Pakistanis.

CIA as a master planner and coordinator has been supervising the gory game from Kabul in concert with RAW, Mossad, MI-6 and RAAM and making Pakistan blood soaked. Bloody game has kept CIA’s drug business and defence industry of US war merchants running. India is now indulging in water terrorism to dry up Pakistan but US media and officials are mum over this flagrant violation of 1961 Indus Basin Treaty since it is part of the game to make Pakistan helpless. India mobilized its forces against Pakistan in 2002 and in 2009 with tacit blessing of USA.

The US has kept silent over unspeakable atrocities against hapless Kashmiris in occupied Kashmir since end 1988 killing over 100,000 in fake encounters, extra judicial killings, raids and indiscriminate firings on peaceful demonstrators. Gang rapes and molestation of women at the hands of security forces who have been give license to kill under draconian laws are routine. Ironically, the freedom fighters seeking a plebiscite as envisaged in UN resolutions have been branded as terrorists by USA at the behest of India. India has never been questioned over its defiance of UN resolutions.

The US which promptly labels Muslims as terrorists simply because they are anti-US, has for several decades been keeping its ears and eyes shut and lips sealed over barbarism of Israelis against Palestinians. Israel had attacked Lebanon in 2006 after getting a nod from Washington. It didn’t object to inhuman economic blockade of Gaza by Israel and didn’t condemn brutal invasion of Gaza in December 2008. Likewise, when the US remained tight lipped over cowardly attack of Israeli forces on Peace Flotilla carrying relief goods for stranded Gazans, it proved beyond doubt that Israel had full backing of USA.

Thousands of Iraqis, Afghans and al-Qaeda detainees were put in horrific Gitmo, Abu Gharib, Baghram jails as suspects involved in terrorism where they were subjected to most gruesome torture for years without trials and without anyone hearing their cries. Among several torture techniques, water boarding is the most dreadful. After years of detention and torture most were found innocent and released but they got mentally incapacitated for life.

The US desires security for Israel in Middle East and for India in South Asia. The US has succeeded in making Israel the unchallenged power in Middle East where all Muslim states are ruled by pro-American puppet-like regimes. Militarily strong Egypt is still tied to peace treaty with Israel, while defiant Iraq has been tamed. Libya is under attack to get rid of rebellious Qaddafi. Soon, another regime change will take place in Syria and possibly in Iran. It will then become easier to deal with Hamas and Hizbollah to remove all security fears of Israel. The US has yet to accomplish its mission in South Asia since it has been unable to extract nuclear teeth of Pakistan and reduce its warrior spirit. Concerted efforts are underway to steal or destroy nukes and delivery means which are under tight control of Strategic Force.

Going through the track record and conduct of USA, there is no doubt left in anyone’s mind that American foreign policy revolves around intrigues, lies, deceit, conspiracies, terrorism, false flag operations and use of force. Americans consider them to be most open minded and liberal in the world. The reality is quite opposite to their self-claimed belief. Blacks and whites communal riots are a routine affair in USA as in the case of Hindu-Muslim riots in India. There is no dearth of extremist Americans who remain on lookout how to injure the religious beliefs of others particularly Muslims, exactly the same way as in India.

We do not have to dig too deep in the past. The US court sentenced Dr Afia Siddiqui to 86 years jail term on account of uncommitted offences merely because of deep seated prejudice against Muslims. The extremist mindset of the US Pastor Terry Jones is also a glaring example of religious intolerance and bigotry prevalent in USA. He first announced his intentions to burn Holy Quran and then declared his intention to file a petition in court against use of Quran in USA. Later on he fulfilled his satanic plan by burning copies of Quran and got away with it.

Prejudice, fanaticism, extremism, intolerance and cruelty are some of the characteristics deeply ingrained into the minds of US officials and elites. With such hideous traits and black track record, on what basis the US is voicing its concerns about terrorism when it is the biggest terrorist state of the world? The huge network of CIA operatives secretly deployed in Pakistan is stoking flames of terrorism to create anarchic conditions. Pakistan has no moral justification to become an ally of biggest terrorist state and fight its war when it has been confirmed that it is fuelling rather than curbing terrorism to harm Pakistan.

About the Writer: Asif Haroon is a retired Brig and a defence analyst. Email: [email protected]