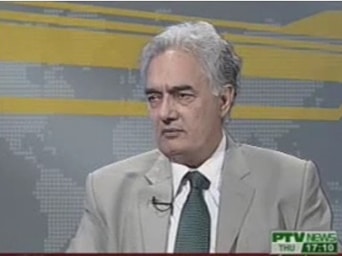 Arrogance is American character, bullying the weak is her hobby and retreating in chaos is her fate accomplice.

Trilateral talks were held on June 26 in Kabul. For the first time Pakistan has been assertive of its role and demands as a partner in this War On Terror that broadly has been rejected by the world at large and Pakistani public in particular. Since its inception, Pakistan governments over this decade long war have been just silent compliant partners. “Do more,” had been the cry from Washington, always complaining that Pakistan is not doing enough.

Participation in this war was Musharraf’s need who wanted legitimacy to his rule that was not forthcoming. Finding this as an opportunity, Musharraf opened all gates to help the US in this unjustified war that primarily has been Washington’s own creation, of course not without the active participation of Israel. Since at the core, this was a war against Islam, India became a major partner of the US and Israel by default.

In this wretched war, Pakistan has lost over 5000 soldiers and more than 30000 civilians. Keeping the count of civilians casualties is not an easy task therefore it is assumed that it could be much higher than this figure, here wounded, maimed, disabled are not being counted both in military and civilian population.

The US concedes but does not pay off about 70 billion dollars of war losses where as in reality, Pakistan has suffered over 100 billion dollars as a price of this war. Prior to 9/11, Pakistan was a much peaceful country, economy was gaining, people were happy and contented to quite an extent. 9/11 has ruined all this, now our city and town is subjected to terrorist attacks, life is not safe or at least not comfortable.

With the falling economy, people problems are surmounting that’s becoming unmanageable by the government. When in this backdrop, the US blames Pakistan for not doing enough it simply sounds ridiculous and insulting. Pakistan has suffered much more casualties in human lives and virtually a complete collapse of economy due to this war.

Obama talking on his withdrawal strategy said, “now on, Afghanistan would be the host and Pakistan shall be attacked to eliminate the threats emanating from there.” Outgoing Secretary Defense Robert Gates announced that the US could have won this war without Pakistan, Hillary Clinton, the charming viper always comes with strong sting, now she has threatened to stop all aid to Pakistan should it not concede to US demands. To top it all, John Kerry came with yet another threatening statement saying, “Drawing down troops from Afghanistan is the right move. Now it’s time to focus on the real threat in the neighborhood: the one coming from Pakistan.” In his paper, The Road Home From Kabul. These statements are a terrorism of a different kind where a sovereign state is being threatened and terrorized to scum to their unjustified demands.

The most recent threat reported by Reuters has come only now when the US refuses to vacate the Shamsi Air Base in Balochistan from where the CIA operates the drones. This is a typical East India Company methodology to bully the host.

May 2nd US attack on Pakistan has altered the mindset of Pakistan Military, where General Kayani is becoming more assertive and this he has to be because now he is left with no other choice. The best part is that now such assertive demands are coming from the Federal Government that presents a united front from Pakistan.

The aid money that the US so much drumbeats, is nothing but a few vapours in thin air. Pakistan has given 1.5 billion in a year where as it spends 5 billions a week in Afghanistan, the brunt is being taken by Pakistan and rewards are being given to India for her no active role. India, a country that has no border with Afghanistan is being boosted there only to sandwich Pakistan.

For stability in the region, Pakistan, Iran and Afghanistan should form a much closer alliance backed with all trust, faith and commitment. The history, culture, threats and destiny of these countries is the same.

On the subject, S M Hali, a respected anchor who hosts a program on PTV News, ‘Defense and Diplomacy’ where he had as his panelists former ambassador Javed Hafiz and Raja Mujtaba. The issues were discussed very freely and with open mind, the clippings have been placed below for the readers to view.