Home Veterans A July Fourth Shame on the Founders 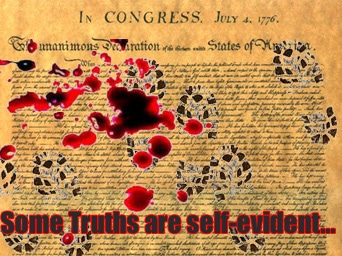 The tendency is to think of ourselves as “exceptional”

Not just “all Americans,” mind you, but all people. The Declaration of Independence was meant to be a statement expressing the “self-evident” rights of all mankind. Those principles had a universality that was a beacon to the world.

Yes, that was I standing before the U.S. Embassy in Athens on the eve of the July Fourth weekend holding the American flag in the distress mode — upside down.

Indignities experienced by me and my co-guests on “The Audacity of Hope,” the American boat to Gaza, over the past 10 days in Athens leave no doubt in my mind that Barack Obama’s administration has forfeited the right to claim any lineage to the brave Americans who declared independence from the king of England 235 years ago.

In the Declaration of Independence, they pledged their lives, fortunes and sacred honor to a new enterprise of freedom, democracy and the human spirit. The outcome was far from assured; likely as not, the hangman’s noose awaited them. They knew that all too well.

But they had a genuine audacity to hope that the majority of their countrymen and women, persuaded by Thomas Paine’s Common Sense and the elegant words of Thomas Jefferson, would conclude that the goal of liberty and freedom was worth the risk; that it was worth whatever the cost.

These days we have been seduced into thinking that such principles have become “quaint” or “obsolete” — words used by President George W. Bush’s White House counsel Alberto Gonzales to make light of important international agreements like the Geneva Conventions.

As every American should know, and remember, the principles enshrined in the Declaration of Independence were based on the firm belief that ALL men are created equal, that they have UNALIENABLE rights — among them life, liberty and the pursuit of happiness.

Not just “all Americans,” mind you, but all people. The Declaration of Independence was meant to be a statement expressing the “self-evident” rights of all mankind. Those principles had a universality that was a beacon to the world.

True, American democracy and, indeed, the Founders themselves were far from perfect. In the early decades of the Republic, basic rights were denied to women, to black slaves, to Native Americans and to many of the poor. But Americans worked on building that “more perfect union” and are still working on it.

Justice was always at the heart of the American ideal. That we still have a long way to go in securing that justice must not be allowed to obscure the fact that ours is a noble and courageous experiment. Or at least it was.

That President Barack Obama would have popularized the phrase “audacity of hope,” after which we named our boat, now seems a cruel hoax, particularly as many of us recalled the high hopes we had once harbored for Obama the candidate. Instead of an “audacity of hope,” Obama the president has often displayed a “paucity of courage.”

But it’s not just Obama. Sadly, all too many of Americans now think of the sacred principles expressed in the Declaration of Independence as applying to Americans, but not to many others — like the 1.6 million people locked in the narrow confines of Gaza. 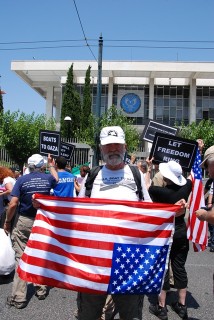 The tendency is to think of ourselves as “exceptional” — so special that we need not care about suffering elsewhere in the world, including the suffering enabled by our own tax dollars.

It is also sad that many U.S. politicians — from the Chief Executive to members of Congress — have been seduced by money and political expediency into disregarding our first president’s farewell address, George Washington’s warning to avoid what he called “entangling alliances” and a “passionate attachment” to goals of another country.

At the time, it was France that Washington had in mind. Today, the “entangling alliance” and “passionate attachment” relate to Israel. Common values are adduced to try to justify conflating U.S. objectives and actions with the goals and behavior of our “ally,” Israel.

Why the quotation marks around “ally?” Because decades ago, when the U.S. government broached the possibility of a mutual defense treaty with the government of Israel, it refused to go along. Mutual defense treaties, you see, require internationally recognized borders and normally a mutual commitment to avoid attacking other countries at will and without forewarning.

The difficulties, which we on “The Audacity of Hope” have encountered at the hands of the Greek government, are clearly a result of Israeli pressure with a likely assist from Obama’s diplomats.

In my own writings, I have highlighted what I have learned about the extraordinary power of joint U.S.-Israeli influence. But it is something quite different to watch that influence be brought to bear on the government of Greece, a seafaring nation normally devoted to unfettered navigation.

And for what purpose? To prevent our “ally” Israel from being exposed for its brutish behavior vis-a-vis the people of Gaza.

I thought I’d seen everything. But the Israeli accusation that our Gaza flotilla is carrying sulfur to pour on Israeli commandos attempting to board our boats … well, that one takes the cake. Plus, the accusation by an Israeli official that we had vowed to shed the blood of Israeli Defense Forces. Amazing.

On the U.S. side, Secretary of State Hillary Clinton appears as unconcerned about what might happen to us at the hands of Israeli (or Greek) commandos as she was on Feb. 15 as she watched me brutalized just 12 yards in front of her during a speech she was giving at George Washington University.

My offense then? Standing quietly — motionless, actually — with my back turned toward her, as a way of showing that not everyone in that audience was oblivious to the killing, maiming and other suffering inflicted on millions of people in Iraq, Afghanistan, Pakistan, Yemen … and the list goes on.

Last week, Clinton charged the international flotilla, of which “The Audacity of Hope” is a part, with planning to enter “Israeli waters” and warned of the consequences — in effect, giving Israel carte blanche to have its way with us.

Meanwhile, descriptions of last year’s violence, in which Israeli commandos staged a night-time boarding raid on the Turkish ship Mari Marmara in international waters in the Mediterranean Sea and killed nine passengers including one American, get expressed in the passive voice. Violence by whom, a Martian might ask.

In any event, we have long since made it abundantly clear that we had no intention to enter “Israeli waters.” Is it conceivable that Madame Secretary still doesn’t know that or is she simply spreading a falsehood meant to discredit our mission? Gazan waters are not Israeli waters. Neither, we thought, is the Aegean Sea.

Adding transparent insult to injury, eight days ago the State Department spokeswoman obfuscated when asked directly, twice, whether the U.S. government considered the Israeli blockade of Gaza legal. This determination to fudge on this key issue (the blockade is, on the face of it, against international law) has not stopped U.S. government functionaries from speaking as if the Israelis are well within their rights.

Worse still, we have learned that some U.S. officials wouldn’t shed a tear if we got our comeuppance at the hands of the Israelis.

Before leaving the United States, I was cautioned by a source with access to very senior staffers at the National Security Council that not only does the White House plan to do absolutely nothing to protect our boat from Israeli attack or illegal boarding, but that White House officials “would be happy if something happened to us.”

They are, I am reliably told, “perfectly willing to have the cold corpses of activists shown on American TV.”

So here we are, passengers and crew of “The Audacity of Hope,” awaiting further instructions from the local Greek authorities, some of whom have been quite candid in expressing their embarrassment and resentment at being manipulated by Washington/Tel Aviv in this new Great Game.

The instructions, of course, come from a weak Greek government unable to stand on principle because of the economic damage that can be done to Greece by the U.S.-dominated IMF, the European Union and Israel, a major trading partner.

We await a deus ex machina to extract us from this seemingly intractable situation. We remain determined to sail to Gaza at the earliest opportunity. And so do the passengers on the other boats in our international flotilla, at least on those boats that have not been physically sabotaged.

(No one has claimed credit for the damage to propeller shafts to two of the boats, but Israeli officials won’t exactly deny that they had a hand in the underwater operations.)

Delays seem to be built into the scenery in this part of the world.  After all, It took Odysseus 20 years to get back to Ithaca.

In this day of instant communication, in which audacity can trump cowardice, we continue to hope. Whatever our circumstances, they are light-years better than the everyday experience in Gaza. We are holding that before our eyes. We do not intend to let the suffering Gazans down.

On Friday, the Audacity of Hope did make a move to set sail, before being turned back by the Greek coast guard. On Saturday, we were on a coast guard wharf with the boat impounded, the crew restricted, and the captain facing some significant charges.

The authorities said the guests were free to leave the boat, but it wasn’t clear that we’d be allowed back on. So, we decided not to leave the captain. We remain determined to go to Gaza.

It would be a fitting way to celebrate the Fourth of July.

NO HECKLER AT CLINTON’S SPEECH

ABOUT THE AUTHOR: Retd. CIA analyst Ray McGovern during his career as a CIA analyst, he prepared and briefed the President’s Daily Brief and chaired National Intelligence Estimates. He is a member of the Steering Group of Veteran Intelligence Professionals for Sanity (VIPS).