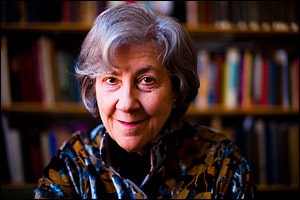 In an audio interview , Harvard University Yiddish Professor Ruth Wisse has condemned ongoing attempts by international activists to set sail for Gaza, on what she calls a “kill-the-Jews flotilla.”

“The purpose of the flotilla is to discredit the Israeli attempt to protect itself and to give Hamas a free hand amassing weapons to use against Israeli civilians.”  Wisse also forms a new type of ‘Jewish solipsism,’ saying “It should be called for what it is: a ‘kill-the-Jews flotilla. If it is called by its proper name, then it will be recognized for what it is.”

Here is the Yiddish logic: label first, then grasp accordingly. However, I would like to remind Wisse that as things stand in the Middle East, it is not the Flotilla peace activists  or the democratically elected Hamas who kill. It is actually the Jewish State that is doing the killing, en masse, and  in the name of the Jewish people.

The Saviour of the West

But Israel is not just about Jewish interests, according to the Yiddish  Professor, it has a far greater role. Israel is the “fighting front line of what we used to call Western civilization, of the democratic free world.”

It is nice to find a Yiddish professor being so openly ‘nostalgic’ about Western civilisation,  but I have to point out that Wisse is not familiar enough with the crucial philosophical distinction between Athens and Jerusalem: while Jerusalem stands for tribalism, chosen-ness and brutality,  Athens represents the birth of the West, i.e. universalism, reason, Christianity , and ethical thinking (something that clearly is not reflected by the shameful behaviour of the  Government in Athens this week).

Wisse is either lying, misinformed, or deluding herself — Israel has nothing to do with Western thought or Western values; indeed, Israel and Jewish ideology are the total opposite of Western thought. At the most, Israel can, at times, be seen as an attempt to mimic aspects of Western thought and value systems.

Moreover, Israel is not a ‘civilisation’  and it is also far from being an exemplary civilised society.  Israel  defines itself  as the Jewish State –and accordingly, Jews from Brooklyn enjoy rights that Palestinians from Jaffa, Lod, Acre, Ramle lack. For Israel to be a ‘civilisation’ then, it must first become a State Of Its Citizens. It must first accept the notion of civil law, and erase any traces of Jewish theocratic traits.   Until that happens, Israel cannot be regarded as a civilisation, let alone ‘Western Civilisation’.

In discussing the Arab spring, Wisse says “If there’s one factor that I would keep my eye on in trying to assess whether the Arab world is moving forward toward democracy, toward internal reformation – or moving backward into greater repression…”.

Clearly, Wisse, fails to acknowledge the obvious role of Islam in general, and in the current events in particular.  Islam is a call for justice and equality and it goes far beyond any judaeo-fied binary model. Islam actually integrates temporality — it looks forward while glimpsing backward, and vice-versa.

But, make no mistake, Wisse also defines what moving ‘forward’  may entail for the Arabs – “that one factor would be whether Arab leaders are able to accept the State of Israel without condition and without concern,” said she. “As long as the Arab world uses Israel as a convenient excuse for not looking inward, for not undergoing its own reformation, for not undertaking its own improvements, those countries cannot improve.”

Wisse represents, in fact, yet another  glimpse into Jewish identity politics, and the total lack of capacity to self -reflect. It would be far more helpful if the  ‘scholar’ would stop her ranting for just a second, and ask herself — how is it that Jews have consistently been faced with firm opposition eventually, wherever they go, and whatever they do?

Rather than ‘blaming the Goyim’ time after time, it is surely about time for Jewish academics  and  scholars to launch a true enterprise, driven by inward looking and genuine self-reflection.

Rather than repeatedly suggesting ‘what is wrong’ with the Gentiles, again and again, they would surely be better advised to at least begin to consider the notion, once and for all, that something may actually be slightly problematic with Jewish ideology and culture itself.