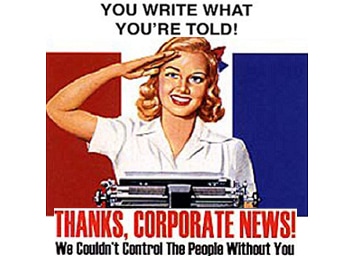 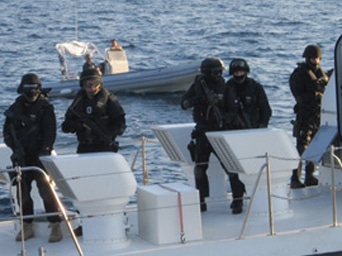 The second front where Israel is fighting against the Gaza Flotilla is in its constant struggle to maintain control over the American corporate media.

The two columns were standard Israeli hasbara (Hebrew for explanation or propaganda) declarations.  Think Fox News or the Tea Party in this use of a single perspective to push an ideology, and you realize just how far American journalism has fallen in recent decades.

A year ago, the Israeli Defense Forces handed Israel one of its worst media defeats in modern history.

Israeli commandos, filled with their government’s propaganda that Israel’s security was at stake, landed on the Turkish ship Mavi Marmara, ready for battle and determined to keep the ship from breaking Israel’s control over Gaza’s shores.

Nine Turkish citizens were killed, one of whom was a Turkish-American.

This year Israel took the job of boarding flotilla ships away from the IDF and gave it to the Greek Coast Guard. On the fourth of July, as Americans celebrated their Independence Day, Israel expanded its Gaza blockade to the Aegean Sea.

What led to Greece’s decision to become Israel’s Aegean Sea outpost? Deep Throat could have told you this was coming: “Follow the money”, specifically the $17 billion which Israel and the US knew Greece needed to escape from a monumental economic collapse.

One way diplomacy works is through negotiations.  Another way, when one side is facing default, is to transfer money from the more powerful nation to the economically-strapped nation, which agrees to give up some of its freedom to let the powerful nation have control over segments of its domestic and foreign policy decisions.

The $17 billion guaranteed,  the Greek government issued a blanket order: No flotilla ships may sail for Gaza from any Greek port.

The optimistically American named ship, The Audacity of Hope, left its port anyway, determined to break the blockade of Gaza. Right on schedule, the Hellenistic Coast Guard boarded the Audacity. (Greek commandos are shown in action above.) The only gifts the Greek commandos brought on board were enough side arms to subdue unarmed European and American peace activists.

Phillip Weiss, the ever reliable Mondoweiss chief, passed along this report from the website, The US Boat to Gaza, which explains what happened: 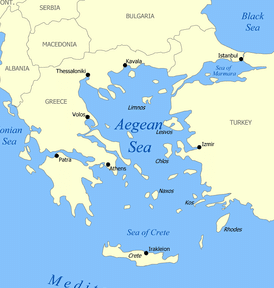 Members of the U.S. Boat to Gaza have begun an open-ended fast calling on the U.S. government to defend our right to sail out of Greece. The fast has begun in front of the U.S. Embassy at 91 Vasilisis Sophias Avenue in Athens. Fasters delivered an urgent letter to the Embassy and plan to sleep overnight outside the Embassy gates.

The departure of the US Boat to Gaza – The Audacity of Hope – was first delayed by a complaint filed by the Israel Law Center and shown to be frivolous. Greek authorities then inspected the boat but, until the boat set sail five days later, the results of that inspection has not been shared with the captain and his crew.

The Greek Coast Guard stopped The Audacity of Hope some 20 minutes after it had left the dock on Friday, July 1. The Coast Guard ordered the captain to stop the ship, which he did. Commandos with drawn rifles ordered the ship to return. It is now impounded at a military dock in Athens and the captain has been arrested.

The captain of the Audacity, John Klusmire, an American citizen from California, was initially held in a Greek prison. There were reports he had been deprived of basic necessities. The website, USTOGAZA, carries frequent updates on the Flotilla. The site has a tweet report that Captain Klusmire was released from jail on July 5.  Charges against him were still pending.

For a report on John Klusmire from a member of his family, see Comment Number Three below. 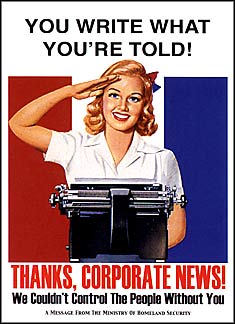 The second front where Israel is fighting against the Gaza Flotilla is in its constant struggle to maintain control over the American corporate media. Timed to reach readers before the ships were set to sail, two pro-Zionist columns appeared in the Chicago Tribune and the Los Angeles Times, written by two different academic experts in international law, both of whom concluded that Israel was within its international legal rights to block the flotilla from “invading” Gaza’s waters.

The two columns were standard Israeli hasbara (Hebrew for explanation or propaganda) declarations.  Think Fox News or the Tea Party in this use of a single perspective to push an ideology, and you realize just how far American journalism has fallen in recent decades.

The Los Angeles Times was once an honorable and respected newspaper, but as James O’Shea tells the story in his book, The Deal from Hell: How Moguls and Wall Street Plundered Great American Newspapers, when the Tribune Company bought the Los Angeles-based Times Mirror Company, it dragged the Times to the level of the Tribune, an arch conservative newspaper whose notion of public service relates entirely to its bottom line.

O’Shea, who has worked for both the Times and the Tribune, described the new media leadership of the two papers this way:

Instead of developing strategies to produce the kind of content that would protect their important asset—the public trust—they depreciated it like an aging Linotype.

Neither the Tribune nor the Times offered a Flotilla perspective along with the hasbara columns. Half the story is not the entire story, especially when the news columns fail to report what is happening to Americans attempting a peaceful protest abroad. A newspaper which is reduced to serving as a conduit for propaganda is no longer a newspaper.

It is also not a “free press”. Cynthia Boaz, writing in TruthOut.org, describes what this form of so-called journalism has done to the profession:

There is nothing more sacred to the maintenance of democracy than a free press. Access to comprehensive, accurate and quality information is essential to the manifestation of Socratic citizenship – the society characterized by a civically engaged, well-informed and socially invested populace. Thus, to the degree that access to quality information is willfully or unintentionally obstructed, democracy itself is degraded.

The Tribune column was written by Robert P. Barnidge Jr., a lecturer in the School of Law at the University of Reading in England. Barnidge has previously written for the conservative Washington DC paper, the Washington Times and frequently contributes to the web site of the American Association of Middle East Studies. Barnidge concludes that Israel may, under international law, intercept ships attempting to enter Gaza waters.

A clue to the perspective of the AAMES is found in the views of its board chair, Bernard Lewis, a strong proponent of the now largely debunked Clash of Civilizations worldview. This way of viewing the relationship between Islam and Western powers gained popularity during the buildup to the US invasion of Iraq.

Amos Guiora had an op-ed in the LA Times yesterday which seeks to justify the Israeli blockade of Gaza and its plans to stop the Freedom Flotilla. The arguments Professor Guiora employs are standard Israeli hasbara which makes you wonder why the paper chose to print this uninspired and hackneyed piece.

Guiora, who is an Israeli citizen, was born and educated in the US, is identified only as a law professor at the University of Utah and the author of Freedom from Religion: Rights and National Security.

What the newspaper does not reveal is that Guiora spent 18 years in command positions in the Israeli Defense Forces, having risen to the rank of Lieutenant Colonel in the Judge Advocate General Corps. This omission has been brought to the attention of the editors, but there has not been any correction made.

In addition to these two op-ed columns, there were the usual Zionist-friendly stories from the New York Times‘ Jerusalem-based correspondent, Ethan Bronner. In one story he reported that Gaza’s economy was rising from the ashes, which to Gaza residents sounds more like they are living in a Soviet-style Potemkin Village than the reality that actually exists in a walled-in Gaza surrounded by armed guards.

A week later, Bronner was back with a column which pretends a balance.  Its distortions are blatant. He claims the Gaza Flotilla sees itself as a modern-day version of the Exodus, the ship which tried to bring Jewish European refugees into British-controlled Palestine at the end of World War II.  The Leon Uris novel and the film that followed were early examples of hasbara, propaganda designed to convince the world of the righteousness of Israel’s creation as a state.

The Exodus spin is without merit because the purpose of the Audacity of Hope is to bring hope to Gaza, not refugees. Bronner shamelessly recalls the Exodus because it is iconic to the Israeli public and to its American supporters.

In the cargo of the Audacity of Hope is a collection of letters from Americans and Europeans reminding Gazans that they must not give up  hope because they are not alone. A threat to Israel’s security?  Depends on how you define security.

Prior to their attempted departure from Athens, passengers aboard the Audacity of Hope came together to produce a short video, To Gaza with Love. Many familiar names and faces are involved in this journey designed “to challenge oppression” in Gaza.

James Wall is currently a Contributing Editor of The Christian Century magazine, based in Chicago, Illinois.  From 1972 through 1999, he was editor and publisher of the Christian Century magazine.  He has made more than 20 trips to that region as a journalist, during which he covered such events as Anwar Sadat’s 1977 trip to Jerusalem, and the 2006 Palestinian legislative election. He has interviewed, and written about, journalists, religious leaders, political leaders and private citizens in the region.  Jim served for two years on active duty in the US Air Force, and three additional years in the USAF (inactive) reserve. He can be reached at:  [email protected]