Home Life Glenn Beck at Knesset "I Stand Up for Israel" 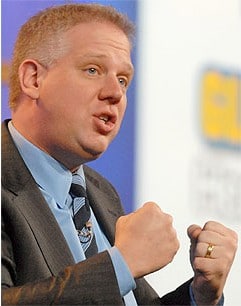 Biblical Esther and Ruth Guided Me

American news personality Glenn Beck told the Knesset Aliyah and Absorption Committee Monday that the Biblical Esther and Ruth have guided him as he stands up for Israel.

“Esther knew she had no choice but to come out and speak,” he said, referring to Queen Esther’s risking her life to save the Persian Jewish community. “I knew I had no choice but to speak the truth. I came here in 2002, looked for the truth, and when I got home, I received my first death threat.”

Speaking of Ruth, a non-Jew who followed her Jewish mother-in-law Naomi from Moab to Israel and then converted, Beck said, “Your people are my people and I will go where you will go. Your G-d is my G-d. I invite the People of Israel to stand with your G-d.”

”We have to believe in common decency, link arms, and G-d will do the rest.”

“The world has changed. People now have power,” Beck told the committee. He explained that the Internet has allowed people to be more accessible to the truth, which he said has been censored by mainstream media.

“The world is being changed by a few guys in the basement writing on the Internet. The truth will set you free. Forget the [mainstream] media,” Beck added.

“Rulers want to control, and that is where there is trouble,” Beck told the committee and guests. “I am truly humbled and disturbed by what people say to me on the street… People sincerely thank me for saying the truth. What is disturbing is that if a guy just gets on television or radio and says that [and gets thanked for telling the truth], Israel and Western life is danger.”

He said that the demands of the Palestinian Authority are another excuse for the world to continue a centuries-old campaign of anti-Semitism, which he said is “going through the roof. The United States has an economic problem and the Jews will be blamed.”

The Arab-Israeli conflict is “about the end of West and the destruction of Israel,” according to Beck.

He asked Israelis to join him in Jerusalem on August 24 when he is scheduled to hold a “Restoring Courage” rally, similar to the Restoring Honor rally in Washington last year. The rally next month will be views worldwide on at least 700 remote viewing stations.

Charleston Daily Mail August 15, 2008 | ASHLEY B. CRAIG More West Virginians are being investigated and arrested for incidents involving child pornography, including today’s capture of a West Side man who police were seeking for several days.

As of Aug. 1, the West Virginia Internet Crimes Against Children task force had investigated 103 cases so far this year and made more than 40 arrests.

The task force has had a 100 percent conviction rate among cases prosecuted so far.

Lt. Sean Crosier of the Kanawha County Sheriff’s Department says the emphasis is helping to prevent even worse situations.

Kanawha County deputies and the Kanawha Bureau of Investigation started working with the task force last month, and Crosier said two arrests already have been made.

Crosier, who has specialized in sexual offenses for the last 10 years, thinks the problem is more serious than people simply viewing child pornography.

“It’s a growing epidemic and we’ve seen an increase especially since we started working with ICAC. I think it’s always been there,” he said.

He says people who view pornography fantasize about acting but eventually may begin to act on their fantasies.

Crosier cited a study released by the U.S. Department of Justice that said 85 percent of people who view child pornography have abused someone.

“If we cut them off at the fantasy stage, we can save a lot of victims,” he said.

The task force specializes in finding people who are in possession of child pornography and is made up of state, local and federal law enforcement groups, including the Charleston and South Charleston police departments and Kanawha County deputies. web site programs like limewire

Sgt. Christopher Casto of the State Police heads up the West Virginia regional task force focusing on crimes against children from its headquarters in Morgantown. The headquarters is also the home of one of the state’s digital forensics unit. The other is in Huntington.

Before the state started its own regional office, officials worked with a southern Virginia unit based in Bedford County, Va.

The West Virginia State Police received a $250,000 federal grant from the U. S. Department of Justice in 2007 to start a regional task force for the state. State police will reapply for renewal in 2009.

The task force has assisted with several arrests related to child pornography this summer.

Task force efforts resulted in the late July arrest of Jim Sorgman, an administrator with Kanawha County’s Metro 911 center who had been on the job for 16 years. programslikelimewirenow.net programs like limewire

A complaint filed in Kanawha County Magistrate Court says Sorgman, 49, was found in possession of images of female minors in sexually explicit poses.

State Police troopers along with other county agencies tracked the IP address to Sorgman’s South Charleston residence and said he had admitted to having the images on his home computer.

In a more recent incident, a Shrewsbury man accused of possessing child pornography was found by the task force and arrested by State Police.

Lester K. Salmons, 58, of Maple Street was arrested after troopers found a video montage nearly 30 minutes long of children ages 2 to 15 being abused by adult males, according to a complaint filed in magistrate court.

Charleston police and the task force for several days searched for a man suspected of actually committing sexual acts against children.

Police have identified the man as Jeffrey Thomas Boyd, 46, of Charleston’s West Side. Charleston Police Sgt. Aaron James said Boyd was arrested this morning by detectives on Zable Drive.

He was to be charged with sexual abuse by a parent, guardian or person of trust to the child; with indecent exposure to a child; with abduction of a child; and with use of minors in filming sexually explicit conduct.