Home Government Washington and the Middle East: Time to give up on the Political... 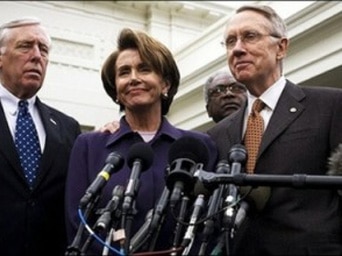 Having seen Congress’ love fest for Bibi and the humiliation of President Obama, does anyone think writing to your Congressman is going to accomplish anything?

When President Obama suggested that the pre June 1967 War Arab-Israeli armistice line ought to serve as the basis for negotiating the boundaries of a Palestinian state he provoked a wave of political and media criticism.

Republican presidential candidates accused Obama of “throwing Israel under the bus” and trying “to dictate how Israel runs her affairs.” Obama’s own party refused to come to his defense. During their performances on the AIPAC stage House Whip Hoyer and Senate Majority Leader Reid were keen to distance themselves from the President. Media criticism was biased and over the top too.  Nowhere was it mentioned, for example, that an Israeli withdrawal to the 1967 line would give Palestinians only 20% of British Mandate Palestine.

Meantime, only the Israeli newspaper Haaretz and a few individuals seem to have noticed that Obama had really already given Israel what it required, approval for the Netanyahu government’s refusal to negotiate with the Palestinians because of the Fatah-Hamas rapprochement and the promise of support at the UN should the Palestinians seek recognition in that forum.  Instead, the President was attacked by an outraged and self-righteous chorus of pundits and politicians, all echoing the words of a very ungrateful Israeli Prime Minister who had the effrontery to give the President a very public dressing down in the White House.

Perhaps President Obama will learn that when you negotiate with the Israelis not only do you have to give them 150% of what they ask for, but you have to concede publically the wisdom, fairness, and justice of their demands.  Thus, for example, before the Israelis negotiate with Hamas, the Hamas leadership will have to acknowledge that it was fair and just for the Zionists to establish a state in Palestine at the expense of the Palestinians and foreswear violent resistance to Israel’s continuing land grabs. Meanwhile, however, Israel will refuse to acknowledge the Palestinians’ rights to a real state of their own while continuing to bomb and starve Gaza.

Watching a servile American media present the Israeli case was at times downright funny.  For example, MSNBC aired a “debate” between ex State Department official Aaron David Miller and the Wiesenthal Center’s Rabbi Marvin Hier. Miller and Hier struggled to outdo each other’s attacks on President Obama. Miller claimed, for instance, that the 1967 lines were “Auschwitz borders” while Hier maintained Obama’s hidden intent was to bring Hamas into the peace negotiations, an assertion so wacky that even Miller had to distance himself from it. Thus MSNBC presented its listeners with pro-Israel views which ranged from the extreme right of Netanyahu’s Likud Party to the outright racism of Israeli Foreign Minister Advigor Lieberman.

In fact, Rabbi Hier is even more of an extremist than Lieberman, who only seeks to expel Israel’s Arab citizens, while Hier wants to extirpate Arab dead as well.  Hier’s Simon Wiesenthal Center is in the process of tearing out the 11th century Mamilla graveyard in Jerusalem to replace it with a branch of the Los Angeles based Museum of Tolerance.  As for Miller, one would have hoped that he would not have dishonored the victims of Nazi genocide by using their memory to justify the continuing occupation of the West Bank, east Jerusalem and the blockade of Gaza. Apparently for Miller the holocaust is just another weapon to deploy against those who don’t see the Middle East his way.

Netanyahu’s appearance before a joint session of Congress, coming on the heels on an AIPAC conference attended by a majority of our Solons, who swore undying fidelity to the Zionist state, demonstrates the complete control of a foreign power over the Legislative branch. The numerous standing ovations Netanyahu received saw “our” representatives popping up and down like members of the Supreme Soviet during one of Stalin’s speeches or perhaps members of the tame Arab parliaments we are so keen to overthrow.

It ought to be acknowledged that Congress’ alliance with Israel did not happen overnight. In fact Congress favored the Zionist enterprise long before the foundation of Israel. In September of 1922 the House passed a resolution supporting Britain’s Balfour Declaration (1917) advocating the establishment of a “Jewish National Home” in Palestine. Recently, of course, Israel has become Congress’ number one foreign policy concern, eclipsing even America’s wars, which Congress seems anxious to avoid either approving or disapproving, although they are willing enough to fund them. In fact, one wonders whether Congress cares very much at all about our armed forces deployed in Arab countries. If they did, they would be wise enough to realize that standing ovations for Bib Netanyahu when he states his intent to deny the Palestinians a state and to hold on to all of Jerusalem are about the worst thing they could do.

Israeli dominance of American foreign policy is not going to end any time soon. President Obama is knowledgeable enough to know how damaging American Middle East policy is to this country. He was, as Fox News kept reminding us during the 2008 Campaign, good friends with Middle East scholar Rashid Khalidi when they both lived in Chicago. Having seen Congress’ love fest for Bibi and the humiliation of President Obama, does anyone think writing to your Congressman is going to accomplish anything? It is time for those of us who believe a just settlement of the Palestine question is in America’s national interest to consider the BDS Movement: Boycott Israeli products, protest American direct and indirect investment in Israel and support international sanctions against Israel until that country begins to adhere to at least minimal standards of international behavior.