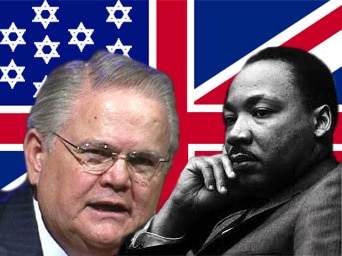 Fundamentalist and rabid Zionist fire and brimstone preacher John Hagee is taking his ‘mission’ to Birmingham, UK on 18-20 August, “teaching the Book of Revelation” with the “goal” to “reveal the world tomorrow, confirm the total accuracy of Bible prophecy and give you a better understanding of the current crisis America and the world are facing.” [1]

Hagee and his ‘disciples’ should begin at the very end of the book of Revelation which “warns everyone who hears the words of the prophecy of this book: If anyone adds anything to them. God will add to him the plagues described in this book. And if anyone takes words away from this book of prophecy, God will take away from him his share in the tree of life.”-Rev. 22:18-19

The Book of the Revelation of Saint John the Divine, who written during the time John was was exiled to Patmos in the Aegean archipelago during the reign of Domitian, at the end of the 1st century.

No one knows what John was burning as incense or how much wine he consumed when he wrote this piece of apocalyptic literature which is “marked by distinctive literary features, particularly prediction of future events and accounts of visionary experiences or journeys to heaven, often involving vivid symbolism.”

John’s poem, dreams and visions were written for the people of his day and it was his way to confront the Roman Occupying Forces.

In his Letter from Birmingham Jail, Reverend Martin Luther King, Jr. directly challenged his “fellow clergymen” and the willfully ignorant

“Injustice anywhere is a threat to justice everywhere. We are caught in an inescapable network of mutuality, tied in a single garment of destiny. Whatever affects one directly, affects all indirectly.

“I submit that an individual who breaks a law that conscience tells him is unjust, and who willingly accepts the penalty of imprisonment in order to arouse the conscience of the community over its injustice, is in reality expressing the highest respect for law.

“Oppressed people cannot remain oppressed forever and if repressed emotions are not released in nonviolent ways, they will seek expression through violence; this is not a threat but a fact of history.”

For the many who take the Bible literally I wonder why they do not take Jesus more seriously, for he warned it is the Peacemakers who are the children of God-not those that bomb, torture or occupy others and do NOT judge others.

“John Hagee believes the Holocaust was part of God’s plan to force Jews to return to Israel…He compared Adolf Hitler in one sermon to a ‘hunter’ sent by God to force Jews to live in Israel and said the Koran gave Muslims ‘a scriptural mandate to kill Christians and Jews’.

“He also claimed that 200 million Muslims were ready to commit violence against the US and Israel. In the same interview he claimed Hurricane Katrina, which killed 1,800 people in 2005, was ‘the judgment of God against New Orleans’ because of a planned ‘homosexual parade’.” [2]

On 6 November 2007, I attended a CUFI/Christians United for Israel event at the James L. Knight Center in Miami, which was packed to the rafters with Hagee’s tribe of Christian Zionists and south Florida’s right wing Jewish community.

Zion’s Fire Banners, dancers, singers and a band whipped the crowd into a frenzy of spinning, jumping, clapping, twirling and moved the rotund Hagee to link arms with men in skull caps and dance the Hora-not to Hava Nagila, but to repeated choruses of:

From one end of the stage to the other, the largest American and Israeli flags I have ever seen were draped side by side and by the end of the evening I imagined every star on the red-white-and blue had morphed into the Star of David.

Rabbi Freedman delivered the Invocation, “We are all friends of the only democracy in the Middle East.”

I immediately recalled what American Israeli, Jeff Halper, the Founder and Coordinator of ICAHD/Israeli Committee Against House Demolitions told me during one of my five journeys to Jerusalem:

“Israel is a not a democracy but is an Ethnocracy, meaning a country run and controlled by a national group with some democratic elements but set up with Jews in control and structured to keep them in control.”

Rabbi Freedman continued on, “From Mount Sinai to Mount Zion to Mount Vernon we are all Zionists! Israel is second to America in how many immigrants we have absorbed.”

Immigrant absorption in Israel comes with perks and is called Aliyah, [“go up”] and is a fundamental concept of Zionism enshrined in Israel’s Law of Return, which permits any Jew from any where in the world the legal right to government assisted immigration and settlement in Israel, automatic Israeli citizenship, unemployment benefits, free medical, and subsidized housing. Young adult immigrants receive free room, utilities, and three meals a day for the first five months and 100 percent of their tuition is paid by the government.

Hagee’s mastery of manipulating the fears of his audience garnered him a standing ovation as the shofars blew, “Israel was re-born by an act of God and Israel lives! The Jews have suffered great persecution and survived slavery and the Final Solution! God Jehovah will bury Hamas, Hezbollah and Iran! The flag of Israel will fly over the undivided Jerusalem and be the praise of all the earth! It’s 1938 again and the new Hitler is Ahmadinejad! Radical Islamisicts are threatening to develop nuclear weapons in order to destroy Israel and then the USA! But we are indivisible and we are both here forever!”

However, “In his October 2005 speech, Mr. Ahmadinejad never used the word “map” or the term “wiped off”. According to Farsi-language experts like Juan Cole and even right-wing services like MEMRI, what he actually said was “this regime that is occupying Jerusalem must vanish from the page of time.”

“In this speech to an annual anti-Zionist conference, Mr. Ahmadinejad was being prophetic, not threatening. He was citing Imam Khomeini, who said this line in the 1980s (a period when Israel was actually selling arms to Iran, so apparently it was not viewed as so ghastly then). Mr. Ahmadinejad had just reminded his audience that the Shah’s regime, the Soviet Union, and Saddam Hussein had all seemed enormously powerful and immovable, yet the first two had vanished almost beyond recall and the third now languished in prison. So, too, the “occupying regime” in Jerusalem would someday be gone. His message was, in essence, “This too shall pass.” [3]

Tikkun is Hebrew for mend, repair and transform the world.

Tikkun is also an organization and magazine that researched to discover three distinct elements that energize Christian Zionists:

1. A strong commitment to conservative and ultra-nationalist American politics (so strong, I believe, that if the U.S. were to decide to break with Israel, this part of the Christian Zionist leadership would go along with that and drop its defense of Israeli policies).

2. Dispensationalist religious commitments that lead many of the Christian Zionists to yearn for a cataclysmic “end of history” eschatological war in the Middle East that will precipitate the second coming of Jesus and the Rapture in which all true Christians will go to heaven and all Jews who have not yet converted to Christianity will burn in hell for eternity.

3. A widespread understanding among many Christians that atonement and repentance is needed for 1700 years of murder, rape, and oppression of Jews that was frequently generated by the Church (though, of course, the Evangelicals do not recognize that church as their church). In this category are many Christian Zionists who genuinely feel terrible about what has happened to the Jews and genuinely want to help the Jewish people. Their philo-Semitism is real and sincere.

But in Miami that night, multitudes of misled and misinformed Christian’s celebrated military occupation, violence, power and control and ignored the gospel Jesus preached: “It is the peacemakers who shall be called the children of God.” –Matthew 5:9

Hagee repeatedly cited that all worship the God of Abraham, Isaac and Jacob, but neglected to mention that the first mention of Israel is in Genesis 32:22, when Jacob was renamed Israel for having wrestled and struggled with the Divine.

Hagee threw out the names of all the Hebrew prophets, but not the fact that God raised up prophets to speak truth to power and arrogance and to remind people of what God desires:

“What does God require? He has told you o’man! Be just, be merciful, and walk humbly with your Lord.” -Micah 6:8

God raised up prophets to admonish the “stiff necked people” [Exodus 34:9, Proverbs 29:1] because “My people are fools, they do not know me! They are skilled in doing evil, they know not how to do good.”-Jeremiah 4:22

Hagee invoked the “Torah Way” but neglected what the Torah commands:

“From Moses to Jeremiah and Isaiah, the Prophets taught…that the Jewish claim on the land of Israel was totally contingent on the moral and spiritual life of the Jews who lived there, and that the land would, as the Torah tells us, ‘vomit you out’ if people did not live according to the highest moral vision of Torah. Over and over again, the Torah repeated its most frequently stated mitzvah [command]: “When you enter your land, do not oppress the stranger; the other, the one who is an outsider of your society, the powerless one and then not only ‘you shall love your neighbor as yourself’ but also ‘you shall love the other.'”