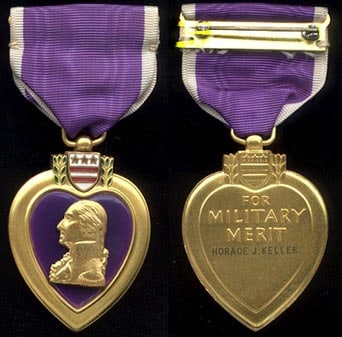 Washington, D.C. – A study led by Department of Veterans Affairs (VA) researchers found that aging Veterans who earned the Purple Heart show decreased mortality compared with those who had not earned the medal. Additionally, those war-wounded Veterans who survive into later life—especially those who do not develop posttraumatic stress disorder (PTSD)—may provide valuable clues as to the factors that lead to resilience to combat stress.

A team of VA researchers who studied more than 10,000 Veterans of World War II and the Korean War produced these findings, which appear online in the journal Depression and Anxiety. “Among the older Veterans we studied, those with Purple Heart citations had half the mortality rate of those without Purple Heart citations,” said lead author Tim Kimbrell, MD, a physician-researcher with the Center for Mental Health and Outcomes Research, based at the Central Arkansas Veterans Healthcare System.

Whether the Purple Heart holders had chronic PTSD or not, they were about twice as likely to still be alive after some 10 years of follow-up, compared with those with no Purple Heart and no PTSD. The study included Veterans who were 65 and or older in the late 1990s. It tracked their survival through 2008.

It is estimated that more than a million Servicemembers received a Purple Heart in World War II, and nearly 119,000 in the Korean War. In recent years, researchers with VA and the Department of Defense have sought insight into the psychological and neurobiological factors that enable some Servicemembers to not develop PTSD after traumatic events. The authors of the new VA study say Purple Heart holders who survive long past their war experience without PTSD may be the ideal population on which to focus such research.

“Our theory was that there are many factors that contribute to resilience to PTSD, and these same factors may increase survival,” said Kimbrell.

The researchers were surprised to find that among Purple Heart recipients, those with PTSD had slightly lower mortality than those without PTSD. This is a contradiction to several studies that have shown a link between chronic stress conditions such as PTSD and worse survival. Kimbrell and colleagues suggest this finding is due to what they term “early attrition.” Those who had been physically injured in World War II or Korea and suffered PTSD may have been less likely to survive until age 65 in the first place; the PTSD-Purple Heart group included in their study may have been an exceptionally healthy and hearty cohort of Veterans.

The researchers say further studies involving these Veterans, as well as those who were wounded in combat but did not develop PTSD, may lead to new insights to help prepare future Servicemembers to cope with the stress and trauma of war.

Kimbrell, in addition to his VA role, is also a professor at the University of Arkansas for Medical Sciences. He collaborated on the study with other authors from his site, as well as with colleagues from the Houston Center for Quality of Care and Utilization Studies, at the Michael E. DeBakey VA Medical Center; Baylor College of Medicine; the Ralph H. Johnson VA Medical Center in Charleston, SC; the Medical University of South Carolina; and the University of Texas Health Science Center.