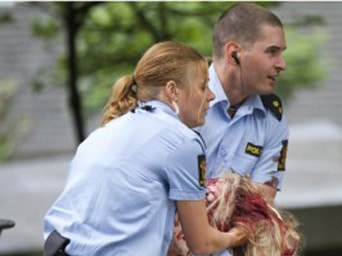 Main Stream media teams up with their one the pad terrorism experts to send some more invoiced in to the NeoCons for their Muslim bashing.  I watched in disgust, again, at the blame game being played on the air before the ambulances had driven away or a single official police report had been made.

You would think that with the high profile that yellow journalism has had in the last two week that these media morons would be practicing just a bit more responsibility and discipline…but alas it may not be in their DNA. I urge you all to flood their email boxes with your comments.

King Henry II’s famous line of ‘Who will rid me of this meddlesome priest (Becket…thanks Alan)?’ comes to mind…substituting ‘useless press’ of course. Maybe we should have a way to vote them out of business, a public referendum the continuing in business.

One of the gems of my video archives is a long background talk that Marine General Douglas Stone gave the Navy League here in Atlanta, 2009. General Stone not only speaks fluent Arabic, but is also a Koranic scholar.

While reforming the Iraq prison systems in debriefed 2000 Jihadists, who to their shock found themselves being whipped on what was not in the Koran that they insisted that was. Stone instituted a ‘deprogramming’ process and subsequent release record with a recidivism rate that would be the envy of all U.S. prison systems.

One of the bombs that he dropped on the audience that night was:

“We can never defeat militant Islam militarily” (he paused and repeated this for effect). “Only the moderate Muslims can do that. And the trick for us is how do we help them without undermining them in the process.”

This pitiful excuse called western journalism with it’s irresponsible and unprofessional Muslim bashing is security threat to all of us.

They are a neon sign recruiting banner that is replacing extremist Muslims maybe even faster that we are pouring tens of billions into the sands and mountains to ‘bring them to the negotiating table’…code language for victory.

Bashy Quraishy has had a front row seat to all of this NeoCon co-ordinated Muslim bashing…a jihad of its own.

At 3.26 p.m on Friday, the 22 July 2011, a hefty explosion ripped through the centre of Oslo, the capital of Norway, causing heavy material damage, dozens of severely injured, 7 people killed and many still missing.

The bomb caused heavy destruction to the offices of Norwegian Prime Minister Jens Stoltenberg and a number of other official buildings. Neighboring offices – including those housing some of Norway’s leading newspapers and news agency NTB were evacuated.

Oil ministry was among the other government buildings hit, while the headquarters of tabloid newspaper VG were also damaged.

From TV pictures, one can see the extensive damage in the shape of rubble. Glass from shattered windows littered the streets and smoke from the fires drifting across the city could be seen from the devastated government quarter. One must condemn such cowardly and brutal carnage as strongly as possible. There should be no buts and ifs on the issue violence and terror.

Soon after the first news flash on Danish TV 2, I zapped at least 5 TV Channels – Danish, Norwegian, Swedish, BBC World and CNN, to see, what was being discussed and how anti-terror experts and media pundits were analyzing the situation and who was being signaled out or even blamed for this hideous crime. They even announced that there were many signs pointing to Islamist terror.

I was not surprised, how quickly; all commentators started pointing the finger towards Islamic terrorists, Al-Qaeeda, Jihadi movements, Islamic militants, Ansar al-Jihad al-Alami, and even the possibility of converted Islamist Norwegians was brought in the discussion.

This serious charge and inflammatory connotation was dished out to public, even if no one had taken responsibility, no arrests took place, no investigation was launched and none of the persons wounded or otherwise even mentioned any thing remotely close to what media and anti-terror experts were irresponsibly launching.

For example, the Swedish terrorism expert Magnus Ranstorp said to News Agency Ritzau among other things that he thought it could be Al Qaida’s work. His position changed when the shooting accrued but his inner intentions came to light when he told news agency T T: “ Had it just been a bombing, it would be natural to connect it to Islamic terror. Now we have also seen an attack against the Labor Party’s youth, and it changes the whole picture”.

Later the New York Times even went as far as to say; “Terrorism specialists said that even if the authorities ultimately ruled out Islamic terrorism as the cause of Friday’s assaults, other kinds of groups or individuals were mimicking Al Qaeda’s brutality and multiple attacks”.

This tone and undocumented finger pointing towards “Islamic Connection” however changed a bit after a short while, when a young blond Norwegian man was arrested after he shot and killed 84 young political activists from the ruling Labor Party’s youth wing, who were gathered on the close by Island of Utøya for a seminar.

Unfortunately, the Prime Minster of Norway, Jens Stoltenberg also went on Norwegian TV and indirectly hinted that terror attacks were the work of non-Norwegian forces. Mark his words;

He did not wait for the police or his Justice Minster to give him some sort of hint and a sound advice. The only balanced remark came from the Norwegian Foreign Minister when he was talking to CNN.

Police authorities were all along saying that it was premature to say, who can be responsible for this action. When the situation became a little clearer, the Norwegian Justice Minster Knut Storberget issued a statement that the arrested man responsible for bombing the Oslo Centre and shooting at Utøya Island is a native Norwegian.

It also emerged that police were aware of the identity of the man who was under interrogation in Oslo as well as it was familiar with the environment in which he moved around. After that the police clearly mentioned that there was no question of international terrorism.

The Norwegian intelligence agency is co-operating with the Oslo police district to investigate the matter and to interrogate the detainee to clarify whether he acted on his own or have a wider support among far right movement in Norway.

Following his apprehension, Breivik was characterized by officials as being a conservative right-wing extremist. Deputy police chief Roger Andresen described the suspect as a “Christian fundamentalist”.

Until 2000, he was member of far right Progressive Party. He has also identified himself in a multitude of social media services as an admirer of, among others, anti-Nazi World War II hero Max Manus and anti-Islam Dutch politician Geert Wilders.

According to the Norwegian Minster of Foreign Minster, all freedom loving and peaceful people in the world have shown the greatest sadness on this carnage and expressed profound solidarity with the families of the victims, Norwegian government and citizens. This is a very heartwarming news.

I just hope that in future, the politicians, the media, the anti-terror experts would let the police do their job of gathering the evidence, collect the information, shifting through the material and finding the culprits.

Guessing, supposing and finger pointing only creates panic among the citizens, throw suspicion on innocent groups and even destroy good relations between the Islamic world and the West.

It is also very harmful and dangerous for ethnic and religious minorities, especially Muslim communities who live in all western societies – peacefully, in harmony and are part of the societies.

There are many progressive people in the West who wish to have pleasant relations with Muslim minorities, but such irrational, irresponsible and knee jerk behavior on the part of opinion makers in the West makes the process of integration difficult if not impossible.

Media has a special duty in this respect. Journalists have a great deal of power in shaping public opinion and thus media must be extra careful when it is covering sensitive issues like terrorism and violence.