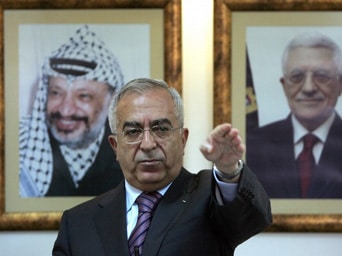 Perhaps it will do good for Salam Fayyad to pick up the phone, better yet to talk the short walk to the office of the Israeli Military Governor for Judea and Samaria (the Boss) and ask for the $300 millions needed by the PA. The $300 million should represent the first of many payments to come for services rendered to the Israeli Occupation since Oslo. Israel owes the PLO/PA some $ 50 Billions for services rendered.

On one hand we are told the PA is working on completion of its “state institutional buildings” in time for the declaration of the independent Palestinian state and we hear of praised from the World Bank and the IMF of the wonderful job Fayyad and the PA are doing in building state institutions. Well the performance of the World Bank and IMF in this messed up world economy raises lots of valid questions about the roles if not the competency of these two institutions to solve the world problems.

On the other hand, we are told Fayyad and the PA are unable to meet the salaries, payroll and running costs of the PA and that the PA does not have enough money to keep running for one month.  So where is this great success the World Bank and IMF are talking about?

Perhaps someone from the World Bank and the IMF can explain to all of us, what kind of “state” Fayyad runs if it does not have enough money to keep going for one month and is living on the dole, international welfare. Raising the question of whether the Palestinians want to have a state that is totally dependent on international welfare? We know they accepted to rely on UNRWA for over 60 years.

What kind of state the guys in Ramallah are talking about? And what kind of institutional buildings that has been going on for sometimes?  We are not aware of any efforts or plans underway to building governing institutions that are transparent and accountable to the people and can withstand public scrutiny.

So far, we are not aware of building a viable executive branch of government that is non-partisan, representing the nation and people and not a narrow partisan politics or personal business interests. An executive branch that is equal to other branches of government.  Not aware of any efforts in this regards moving away from the “personality cult” that has afflicted and badly damaged the Palestinian cause of liberation from the early days of Arafat till now.  An executive branch that is accountable before the people and not to Fatah or the PLO.

We are not aware of any plans to build a legislative branch that is free and independent of the executive branch, one that is the people’s representative, strong enough and independent enough to withstand marginalization by the executive branch as we have seen in the last 20 years, if not the last 45 years. The PLC and since Oslo served no purpose as the people’s representatives, accountable to one but the people who elected them, ineffective, and useless as ever.

We are also not aware of any plans to build an independent judiciary, that is free and independent from the executives, one that can dispense justice in transparent way where the poor and powerful are equal in the eyes of the law and courts. Where defendants and accused are innocent until proven guilty in a court of law with the right of defense to challenge witnesses and evidence in an open court.  A judicial system free from partisan politics as we have seen both in Ramallah and Gaza. What is out there now is nothing to be proud of.

True there has a been a boom in housing constructions but that narrow economy is in the service of the oligarchy and the banks with people overburdened with mortgage and consumer loans. Reports say the people are indebted to the banks to the tune of over $2 billions in an economy that is totally dependent on salaries and payroll of the PA. When the salaries come if they do come, they go directly to pay loans leaving consumers with little money for the daily livings. A payroll that is totally dependent on the good well of the Americans and Europeans and how they feel the PA is keeping its commitment in serving and securing the Jewish Occupation.

Not aware of any plans to develop, train and qualify a labor force that can move away from building Jewish settlements and away from working in settlement factories.  The late Arafat and his team were always too keen on making sure that hundreds of thousands of Palestinian laborers are able to work inside the Green Line, but never in his tenure did he made any efforts to give these hundreds of thousands of labors a choice away from the humiliating process of seeking the daily jobs inside Israel. Supplying cheap labor to Israel was a top priority under Oslo.

The only thing we know of is that billions of dollars invested in the Palestinian Security Forces making sure its meets its commitments to Israel, to the Jewish Occupation and to the safety and security of the these marauding Jewish criminal settler’s terrorists. This is the only priority for the PLO/PA, Israel and international donors. We only wish the security forces provide equal security to the Palestinians as it does for the Jewish Occupation.

Frankly the PA, the PLO has been running on empty for a long time and so fare we have not seen liberations of Palestine, we have not seen return of refugees, we have not seen the removal of one single security check points, have not seen the stopping or preventing of land confiscations, or house demolitions, certainly nothing is done about the ethnic cleansing of Palestinians from East Jerusalem.  Nothing the PLO or the PA committed to was ever accomplished, nothing but total failures and lies. No need to talk about the tens of billions fleeced and remains unaccounted for. Forget about Jerusalem it was promised to Israel under the Palestine Papers.

If I were to make a bet, I will bet that the PLO will not go to the UN this September, and will not keep commitments it made in Istanbul today and will “postpone” its decisions till next year waiting for the “right conditions” and buying time for itself, its leaders certainly buying time for the Jewish Occupation to take more and more land and create more and more facts on the ground, facts the Palestinian leadership will have to accept at the end of the day as part of its commitments to a negotiated settlement.

In a settlement with the agency, the Columbus-based company will put in place a comprehensive security program and have its systems audited by independent experts every other year for 20 years, the government said.

In March, DSW found that credit, debit and checking account numbers of customers in 25 states had been stolen by hackers breaking into the company’s database. The theft was one of several this year from companies and financial institutions.

The victims in the DSW case even included the FTC’s chairman, Deborah Platt Majoras, who received a warning letter from the retailer in June.

In its complaint, the FTC charged that DSW unnecessarily held on to sensitive customer data it no longer needed and stored the information in multiple files, increasing the risks to consumers. Regulators also said the company failed to use adequate or readily available security measures to limit access to its computer networks and detect break-ins. web site dsw printable coupons

Some DSW customers have reported fraudulent charges to their accounts, while others with checking accounts have asked the company to pay the cost of closing accounts and ordering new checks, the FTC said. DSW has been reimbursing some of those expenses.

DSW said in a statement that it does not agree with all the agency’s allegations, but the settlement “validates the importance we place on security and brings closure to this matter.”

DSW noted that when the theft was discovered, it took immediate steps to notify customers and put in measures to prevent future thefts. The company said its exposure for losses related to the breach range from $6.5 million to $9.5 million.

No charges have been filed and the theft remains under investigation, Withers said.

DSW is a subsidiary of Retail Ventures Inc., which also operates the Value City and Filene’s Basement discount chains. DSW operates 190 stores in 32 states. In 2004, the company had $961 million in sales and sold 23.7 million pairs of shoes.