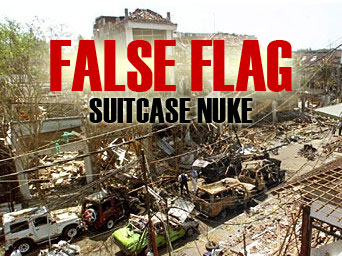 The greatest controversy in the world today is Israeli involvement in 9/11.  Israeli terrorists were captured with explosives in New York on 9/11, others with electronics gear.

A planeload were flown out of the country on presidential order the next day but, in the end, Muslims were blamed and two “revenge” wars buried America.

In fact, then Mossad operations chief Mike Harari, who escaped Norwegian police in 1973, after murder charges were leveled against him for killing an innocent Muslim he misidentified as a terror suspect, is the same Mike Harari who confessed to organizing the 9/11 attacks while having breakfast with VT staffer, Dimitri Khalezov on September 12, 2001 in Bangkok.

If you don’t remember the Bali bombing of 2002, it was Australian’s 9/11 just as 7/7 was Britain’s 9/11.  These attacks were all political, all involved the same people, the same “event planners” and benefited the same players, Israel and right wing extremists in the US, Britain and Australia.  Mike Harari planned and executed the Bali bombing but he needed help, he said.  What he needed was a “fall guy” to blame and Dimitri Khalezov, former Soviet nuclear weapons intelligence officer was a perfect patsy, or so Harari believed when he approached him.

Harari was looking for help in a bombing project he was doing in Bali.  Murdering innocent people for economic and political ends can be so tiresome.  202 people died that day, Muslims were blamed, the media said it was planned in Bangkok 10 months before.  They just had the wrong “event planners.”  If Khalezov were stupid enough to join the crew, news would have gotten out.  Bali was a “suitcase nuke” bombing.

Now, despite the fact that a “domestic terrorist” has confessed in Norway, the terror attacks there are being tied to Israel, just as with 9/11 and the 7/7 attacks in London.  The organizations in Norway and the United Kingdom, tied to the Tea Party in America, being hunted down by police are Israeli trained and funded, part of an operation tying “Islamophobia” to Christian Zionism, bringing to the surface dormant racist traditions.

The US result was the Project for a New American Century, the Bush administration and 9/11.  In Britain, Tony Blair became an Israeli “lapdog,” joining Bush in America’s failed wars.  Britain’s “9/11” was July 7, 2005.  Again, Muslim terrorists were blamed, another one of those predictable coincidences.  9/11 sold a decade of war, 7/7 kept Blair in office and was meant to propel the British into another Galipoli/Dieppe in Iran.

Again it was a false start and a far more dangerous enemy proved responsible, having covered its tracks carelessly, perhaps with even less skill than the Neocon/Israeli nexus responsible for 9/11.  Not long ago, responsibility for the 7/7 attack was laid at the feet of the British government and its Israeli friends.

You missed that one in the news?  Two months ago, a British jury, based on evidence presented by John Anthony “Maud Dib” Hill, found exactly that.  No, you didn’t see it in the press but you can read about it here and see the video that started one of the most controversial human rights cases in history.

After 151 days in dismal Wandsworth Prison, much of it in solitary confinement, John Anthony Hill is finally free. The crime he was accused of was the mailing of a “7/7 truther” DVD from Ireland to the United Kingdom. Yes, you are hearing me right, he was extradited from Ireland for sending a copy of the film, “Ripple Effect,” which outlines complicity by the Blair government in terror attacks that killed 56 back in 2005, including 4 “suicide bombers” now believed by many to have been murdered in a bizarre plot.

This week, a Norwegian ultra-nationalist laid down his weapons before police after having butchered 93 people.  Beyond this, we know little.  It is now clear he had accomplices, on the island, more waiting, he says, to duplicate his effort.  The puny police response, a “Keystone Cops” schtick, piling into a jalopy and then into a leaking rowboat made it all possible as did counter-terrorism officials who turned a highly focused “blind eye” to the real threat of domestic terrorism.

As the day has gone on, the search for accomplices has, overtly, crossed Norway, Sweden and Denmark.  The search has spread to the UK, to the ranks of the infamous EDL and even to the United States and the Christian Zionist community, once the “apple” of George “W” Bush’s eye.  The very real enemy, right wing terrorism, international in flavor, fascist in nature and underwritten by ultra-nationalists across Europe, closely allied to security agencies in Israel, has finally become a real target.

Who was arrested that day?  A white van filled with explosives was stopped by police on the George Washington bridge.  The passengers, armed terrorists, were arrested and jailed.  A second white van was pulled over, 5 were arrested there.  They had been seen “photographing” the attack on the World Trade Center and openly celebrating the carnage.

However, no film, no digital media was seized, in fact no filming went on at all.  Why?  The “cameras” were very likely something else, laser marking systems such as those used for guiding remote controlled bombs to their targets.  Remote controlled aircraft used as weapons are old as the hills, the first dating to September 1925, yes, that old, the British  “Larynyx.   This radio controlled ramp launched plane traveled at 200 mph and was intended to be used against attacking Zeppelins.

What are the parallels with 9/11? The terrorists arrested in the “White Van” incidents were Israeli citizens, “art students” they claimed.  Months later, over the objections of the FBI, they were repatriated to Israel without criminal charges tied to 9/11.  Why?  The Abe Foxman and the ADL, AIPAC, Netanyahu, Barney Frank and the entire Israeli wing of congress demanded it.

The real 9/11 terrorists were arrested by NYPD on 9/11, two of the teams at least.  How did we honor the dead?  We released the culprits, failed to follow the leads which went, went where?  Tel Aviv?  The White House?  This is where all evidence, endless evidence, now leads and America is stuck in neutral, forever damned to a false history.  A decade later, America is foiled by two imaginary enemies, the non-existent “Al Qaeda” and the long dead CIA operative, bin Laden while a small group of half starved tribesmen has beaten the greatest military machine in history to, not a standstill, but to full retreat.  Where have I seen this before?

The initial flurry of “Islamo-blamia” died down, crushed by tons of evidence and, perhaps, the most theatrical mass murderer of all time.  Photos have been pouring onto the internet, Brevik dressed in comic opera garb, many of the photos in the monumental style of Mussolini or his young protege, Julian Assange.

Only hours after the police announced that they had captured the “lone gunman,” 6 accomplices were arrested.  They have since disappeared.

One accomplice was seen on the island, a fact pushed out of police statements but which has resurfaced.  More are sought but, more likely, the real accomplices are in government itself, inside the security services and the police.  It was that way in 1973, according to the Guardian, and it is likely that way still.

Israel’s intelligence service, Mossad, acted without Norwegian help in a botched 1973 assassination in the ski resort of Lillehammer, a national commission concluded yesterday.Norwegians have long speculated about involvement by their own police or intelligence service in the killing, which has been shrouded in secrecy for 27 years, and which has been a sore point in otherwise warm relations between Norway and Israel

The killers in 1973 were released, unpunished.  The real planners of this weeks mass murder are probably already out of the country and will remain unpunished

Mike Harari escaped prison and planned both 9/11 and the Bali bombing that we know of.  He is one of Israel’s greatest national heroes.

Who are the secret heroes this week?