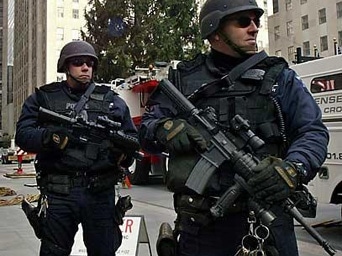 As The U.S. Empire Spreads Abroad It Becomes A Police State At Home

As America’s empire spreads abroad, it becomes ever more the police state at home. The methods used for the suppression of foreigners by military force and violence are eventually mirrored in the “homeland.”

In an article last September 25th titled “It Is Official: the US Is A Police State,” author Paul Craig Roberts, Assistant Treasury Secretary during the Reagan years, wrote, “’Violent extremism’ is one of those undefined police state terms that will mean whatever the government wants it to mean. In this morning’s FBI foray into the homes of American citizens of conscience it means antiwar activists, whose activities are equated with ‘the material support of terrorism’…”

The FBI raids at home are reminiscent of U.S. military raids overseas. In Iraq, for instance, labor union offices were raided and rifled and labor leaders imprisoned by the Occupation forces. Their “crime” was to oppose sweetheart contract deals with private oil firms.

The vast U.S. prison system, which houses 2.4 million Americans, may be compared with the Gulag the U.S. has built abroad. America today is the World’s Jailer. As Allan Uthman reported on AlterNet, in 2006 the Bush regime began building “detention centers” to warehouse inmates for unspecified “new programs” when the Army Corps of Engineers gave Halliburton subsidiary Kellogg Brown & Root nearly $400 million. What we do abroad, we do at home.

Adopting police state tactics on Americans the U.S. Empire first used on subjects abroad has a long history. When Filipinos rebelled against U.S. rule after their country was “liberated” from Spain, captured resistance fighters were subjected to water torture. Twenty years later, imprisoned American pacifists who opposed the Wilson administration’s entry into World War One were hung by their hands, and had running hoses shoved in their faces.

In its editorial of July 25th, The Nation magazine denounces America’s use of “secret armies, covert operations…offshore torture centers, out-of-control armed corporations, runaway military spending, wars by fleets of robots, wars by assassination—and all the other features of the imperial presidency…”

The magazine has long sought to end these practices. It’s still a great idea but now it’s a tad late. The Reactionary Elite that runs America is powerful. Congress rubber-stamps President Obama’s five wars of aggression abroad and enacts laws at home that scorch individual liberty. The result is the emergent police state.

The other day I watched people entering a bus station in Orlando, Florida, submit to a body scan by two security officers who had no probable cause whatever to search them. Americans boarding trains and planes now accept such scans routinely. In area after area, Americans are accepting violations of their privacy in the name of “national security” with hardly a murmur of dissent. The Bush regime created “watch”(75,000 names) and “no fly”(45,000 names) lists that restrict individuals’ air travel–and those searched and/or stopped from flying can complain all they like because it won’t do them any good.

Robert Johnson, an American citizen, Naomi Wolf reports in her book “The End of America”(Chelsea Green), described the humiliation factor of being strip searched when he attempted to board an airplane: “I had to take off my pants. I had to take off my sneakers, then I had to take off my socks. I was treated like a criminal.” This has now become a commonplace ordeal for countless numbers of Americans. Even at the height of World War Two, such invasions of personal rights would have been unthinkable.

Fear of government, unlike anything I have ever known in my lifetime, appears widespread. How do I know people are fearful? Because many readers call me “courageous” (which I definitely am not) for challenging the government, revealing that they truly do fear to speak out.

David Cole, a professor at Georgetown Law School, writes in The Nation that Congress last May reauthorized provisions of the misnamed “Patriot Act” that “permit the government to obtain ‘roving’ wiretaps without identifying the person or the phone to be tapped, (to)demand records from libraries and businesses without establishing any reason to believe the target is involved in criminal, much less terrorist, activity; and (to)use surveillance powers initially restricted to agents of foreign governments or terrorist organizations against ‘lone wolves’ not affiliated with any such group or government.” This is an echo of the ECHELON system the U.S. and its British Commonwealth allies have employed since World War Two to eavesdrop on the entire planet, track dissenters, and steal business secrets.

Cole also writes Attorney General Eric Holder will now allow FBI agents “to rummage through citizens’ trash, conduct searches of computer databases and repeatedly use surveillance squads to track people without any suspicion of individual wrongdoing or court approval.” (Just like the body searches at the bus terminal.) The absence of court approval is significant in that a court is the only legal bulwark a citizen has against unbridled police power. And now that’s gone. The peoples of Afghanistan and Iraq have suffered far worse at the hands of American-led military.

The fact is, when the Empire goes to war, the life of its individual citizen is devalued and degraded—not only on the battlefield, where it is often sacrificed for all the wrong reasons, but at home as well. It’s happening here. The right to form unions freely is scrapped in defiance of the vast majority of workers who want one. The public treasury is looted by Congress to bail out the bankers over the 100-to-one protests of constituents. Foreign wars are waged over the wishes of the popular majority who want them ended.

As liberty after liberty is being circumscribed or eliminated, the common man and woman are being reduced to the common serf. Harold Laski, a former chairman of the British Labor Party, once noted, “We live under a system by which the many are exploited by the few, and war is the ultimate sanction of that exploitation.” Imperialism—whether practiced by Spain in the 16th century, England in the 18th century, Soviet Russia, Imperial Japan, and Nazi Germany in the 20th century, or America today—is a gangrene that expands tyranny at home with the equivalent velocity that it spreads war abroad.

About the Writer: Sherwood Ross is director of the Anti-War News Service. He formerly worked as a columnist for daily newspapers and wire services. All donations to his news service cheerfully accepted. Reach him at [email protected]