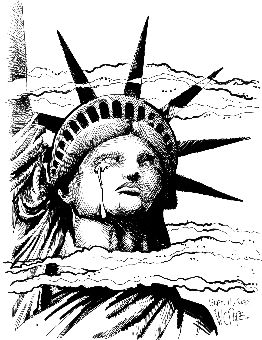 I knew it wouldn’t take too long until I’d start getting letters from veterans saying that they would never vote for a candidate from a particular party ever again, because a legislator voted a particular way. That’s everyone’s right to foster such an opinion, but from my corner of the world, there is so much blame for the current political mess in Washington AND the states, that blaming one party or the other doesn’t make sense.

What does make sense is doing your homework before an election and make your vote count by voting for someone who closely monitors your particular view. We have become such a divided nation because we have so many “one-issue” voters.

I’ll use myself as an example…I am a veteran, but also have a strong opinion about fiscal responsibility in my city, state, and of course, the irresponsible spending being wielded by the bureaucrats in Washington DC. I also strongly support the Second Amendment; a firm immigration policy (I just spent four years legally bringing my wife and son to the US from Eastern Europe); local state control of education; school vouchers for educational accountability; the freedom to drill for oil on my own property if I so choose; the right to keep more of my income which the government wants to tax away to provide services and handouts to those who don’t work as hard as I do (and without first seeking a drug test of the recipient); proof of citizenship with photo ID before being allowed to vote; and I believe English should be declared the official language of the country with ballots written in English only.

That being said, there wasn’t one candidate I voted for in the last election that would meet my “test” of the perfect candidate to earn my vote, so I had to establish my criteria and choose the candidates who met the majority of my interests or simply not vote. A lot of voters chose the latter path and simply decided, “To hell with it”, I’m not voting. The beauty of living in this country is that either choice is legal and okay by me, but to those who don’t vote, you have just lost all legitimacy about political debate, so please don’t bother me with your opinions about the many problems we face in this country.

We have become so focused on ourselves we may not think of anything else. Veteran’s issues may become so important in one’s mind that they block out any reasonable thought about every other issue. The nation is seeing a rise in “Independent voters”. Being an “Independent” was an after-thought just a few decades ago, but today 47% of those polled call themselves Independents. Straight party ticket voting is seen more with single issue type candidates (unions, pro-life, pro-abortion, open borders, or similar special interest people who vote with the herd mentality). In my opinion, that’s why this country is such a mess.

One veteran wrote and told me he was going to encourage all his friends to never vote for a Republican again. It is true that a higher percentage of Democrats vote more favorably on all veteran’s issues, but veteran’s issues will not make a bit a difference if the nation’s economy completely collapses.

I remember it was Democrats Chris Dodd and Barney Frank who stonewalled the investigation and hearing on the forthcoming collapse of Fanny Mae and Freddie Mac that destroyed the housing market and lead to this past recession, and the controversial approval of TARP (Toxic Asset Relief Program) that bailed out Wall Street. It was Democrat Pelosi’s earmark of $33 million to protect some mouse at the wetlands area near the old Candlestick Park, and a complete Democrat controlled Washington that ramrodded healthcare down our collective throats and piled on federal deficits that are completely unsustainable.

Additionally it was the Republicans that allowed President Bush to implement the Social Security Prescription Drug Plan and No Child Left Behind-Department of Education programs substantially increasing the powers of our central government without regard to the financial and social consequences of their actions.

Single party rule gets even worse at the state level…

According to Forbes.com (see full article HERE)…The five states in the worst financial condition–Illinois, New York, Connecticut, California and New Jersey–are all among the all Democrat controlled states. The five most fiscally fit states are more of a mix. Three–Utah, Nebraska and Texas–boast Republican majorities and two–New Hampshire and Virginia–skew Democrat.

Of the 10 states in the worst financial condition, eight are among a total of 23 defined by Gallup as solidly Democrat, meaning the Democrats enjoy an advantage of 10 percentage points or greater in party affiliation. These states include the ones listed above as making up the bottom five, plus Massachusetts, Ohio and Wisconsin.

Why do Democrat controlled states appear to be struggling more than Republican ones? It comes down to stronger unions and a larger appetite for public programs, according to Kent Redfield, professor emeritus of political studies and public affairs at the University of Illinois’ Center for State Policy and Leadership. “Unions in general have more influence in Democratic-controlled states. This isn’t to say that unions are bad, but where they’re strong you have bigger demands for social services and coalitions with construction companies, road builders and others that push up debt.”

I used to live in California, a state strongly in the Democrat camp, but a state where there municipal bonds are just about good for toilet paper. They are at the bottom of the list of all states in fiscal responsibility and are spending money so fast that it would give drunken sailors a bad name. It is even behind Illinois which is in terrible financial condition, with per-capita debt of $1,877 and unfunded pensions of $17,230.  Moody’s rates Illinois’ general obligation debt A1, ahead of California’s which is in last place with nearly $80 billion in bond debt, with another $42 billion authorized but not yet issued; and with about $60 billion in unfunded pension obligations. The projected shortfall for California’s fiscal year (FY) 2012 is $25.4 billion, according to the Center on Budget and Policy Priorities.

Our best protection against the abuse politicians appear enjoying bestowing upon us in their effort to ingratiate themselves in power and show us how much they care for us with handout programs, is term limits, and balanced power rule. Anything else has proven to be ineffectual at best and downright disastrous at worst.