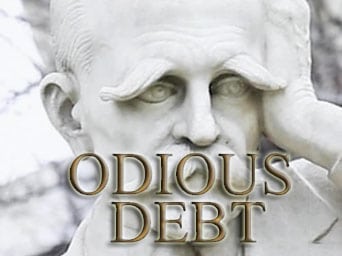 I have been as confused as Mrs Banana when it comes to following up on the great news extracted from a long, but outstanding, video presentation put out by a citizen’s commission on Debt-O-cracy ; featured by this column on June 23.

The video, that I heralded loudly (view it here) documented great news in Ecuador, when popular leader Rafael Correa, was elected president on a first ballot in, I think, 2008.

The video showed president, Correa presiding over a sweeping cleanout of bankers and lobbyists from the IMF.

In the July 30 2001 issue of the world bankster journal “ The Economist ” a brief report alleged all kinds of nasty stuff about this populist hero becoming a tyrant and trying to stifle media dissent. It’s not impossible, but I always suspect “ The Economist ,” since it is Rothschild owned out of “The City of London.”

Immediately, on Monday, 8-2-11, I began attempting to learn what is actually going on. Like many of you VT responders, I harbored thoughts that “they are going to get him” (Correa) as I watched the video .

Sure enough the overlords of finance are trying to wipe out any data favorable toward the “new” Ecuador.
Going back in time here is a report found by my Internet buddy, Malcolm Down Under, who sent me the video originally.

Ecuador’s President Rafael Correa said yesterday that his nation is defaulting on its foreign debt, fulfilling his longtime populist pledge to leave international creditors in the lurch.

The default, Ecuador’s second in 10 years, could rattle already jittery investors who have pulled billions of dollars out of emerging markets in recent months as the global financial crisis has spread. It could also set back U.S. interests in Latin America, as Correa now seeks to deepen financial ties with allies like Iran, which this week granted the South American nation a new $40 million credit line.

Since our prostituted media does only what it is told by Banksters, there has been no genuine reports on how things worked out since December 2008. The hatchet job by The Economist being the first I noticed.

I checked, via Google, the travel guides, thinking they would have up-to-date information. This is what a “City of London” site said:

“A state of emergency remains in place in Quito to ensure the protection of the National Assembly and Government Palace.

“British nationals are advised to continue to exercise caution, to avoid any gatherings and to always carry a form of identity. Even demonstrations intended to be peaceful can turn confrontational and possibly escalate into violence. Large crowds should be avoided. Foreigners participating in political demonstrations or protests of any kind may be subject to arrest and deportation under Ecuadorean law.
Crime is still on the increase.”

So, I turned to Wayne Madsen who was a radio guest before he became a popular Internet patriot. Wayne sent me an unofficial report from a source living in Ecuador now:

“I have noticed nothing unusual. I’ve lived here for almost a year and feel a lot safer in Ecuador than in the USA. I think that The Powers That Be don’t like Rafael Correa’s independent, nationalist, Ecuador First, politics. His administration has done a lot of things for the country for its infrastructure and for the working classes, with precious few resources.

“The travel site is probably rabble rousing for the US State Department and MI-6, trying to stir up trouble, because they see peace is starting to break out in South America.

“I travel freely without any issues. The town where I live is peaceful, as are the towns all around for 100 miles. In a word: if there is trouble brewing, it will be manufactured trouble, in my humble opinion.”

Knowing the crooks as we do, we can rest assured that the report is reliable.

Who will be surprised if the CIA orchestrates another coup?