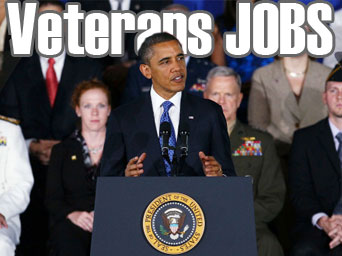 WASHINGTON, Aug. 31, 2011 – President Barack Obama yesterday called on Congress to move quickly on an initiative to offer tax credits to employers who hire unemployed veterans, including those with disabilities.

Speaking yesterday at the American Legion National Convention in Minneapolis, the president emphasized the nation’s responsibility to care for its veterans.

Obama said he has directed the federal government to hire more veterans. During the past year and a half, that directive has resulted in more than 100,000 veteran hires.

And, the U.S. Office of Personnel Management announced today that it has published final regulations to give military spouses of deceased and 100-percent disabled veterans as much time as they need to apply for a federal job under the military spouse hiring authority.

“But in this tough economy, far too many of our veterans are still unemployed,” the president said yesterday. “That’s why I’ve proposed a comprehensive initiative to make sure we’re tapping the incredible talents of our veterans.”

The two-part initiative is designed to help the newest veterans find and get private-sector jobs, while providing tax credits for companies that hire unemployed veterans, including those with disabilities, the president explained.

Obama said he has directed the Defense Department and Department of Veterans Affairs to create a “reverse boot camp” to help the newest veterans prepare for civilian jobs and translate their military skills into industry-accepted licenses and credentials.

He also called on every state to pass laws making it easier for veterans to get the credentials, and jobs for which they qualify.

The second part of the initiative calls on the private sector to do its part. “I’ve challenged companies across America to hire or train 100,000 unemployed veterans or their spouses,” Obama said.

This, he noted, builds on commitments many companies have made as part of the Joining Forces campaign being led by First Lady Michelle Obama and Dr. Jill Biden, wife of Vice President Joe Biden.

Saluting the 5 million Americans who have served in uniform since 9/11 as a “generation of innovators” who’ve “changed the way America fights and wins its wars,” President Barack Obama said yesterday that veterans also are the very people the nation needs to jump-start its economy.

“After a decade of war, it’s time to focus on nation building here at home,” the president said. “And our veterans, especially our ‘9/11-Generation’ veterans, have the skills and the dedication to help lead the way.”

“We need these veterans working and contributing and creating the new jobs and industries that will keep America competitive in the 21st century,” he said.

Obama cited funding for the post-9/11 GI Bill that’s now helping more than 500,000 veterans and family members “go to college, get their degrees and play their part in moving America forward.”

The program will expand this fall to include vocational training and apprenticeships “so veterans can develop the skills to succeed in today’s economy,” he said.

Previously, certain military spouses and widows or widowers could be appointed non-competitively to a federal job within a limited two-year timeframe after their spouse died or became totally disabled, OPM officials explained.

However, many spouses were not prepared to enter the workforce within that timeframe, they said. Some were still grieving or were enrolled in educational or training programs or caring for children or their disabled spouse.

The final regulations recognize that two years may not be enough time for these spouses to seek and obtain a federal job.

“Military spouses make countless sacrifices for our nation through their dedication and support on the home front while their loved ones are serving,” said OPM Director John Berry. “In recognition of their sacrifice, this rule will help military spouses find employment in the government.”