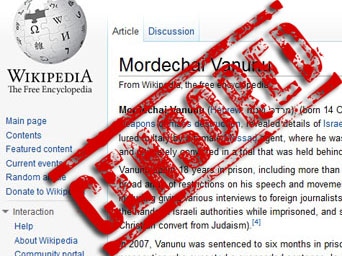 On the last day of August Mordechai Vanunu updated the world regarding his inspired public plea to Israel: Vanunu CANCEL,Revoking my Citizenship-MAY 5-2011eng’

Under “Arrests and hearings” on Vanunu’s WIKI page, I posted:

On 31 August 2011, Vanunu wrote: “The court hearing about the restrictions, not to speak to foreigners, not to leave Israel will be on Oct’ 3 (it is possible the date can be changed). About canceling my Israel citizenship, we are waiting to hear from Interior minister or we will have one more court hearing.” www.youtube.com/user/vanunuvmjc

On the first day of September I checked Vanunu’s Wiki page and discovered Vanunu’s words had been censored and not even a message or warning from the ‘Wiki Team’ editors to me as has been our history.

My battles with the Powers that be at WIKIPEDIA began years ago when I edited the very first line, which WIKI edited back wrong:

On Vanunu Facebook page he writes “born on October 13, 1954” but WIKI does not accept Vanunu’s own words as credible witness and what follows is a short excerpt from:

When Israel sent Vanunu back to solitary confinement on 23 May 2010; punishment for speaking to foreign media in 2004, I was kept occupied for over a week responding to over 100 Vanunu Google NEWS ALERTS, because the vast majority were based on erroneous information as to why Vanunu was sent back to jail.

To clarify The Media’s errors and ‘sin’ of omissions, I emailed them all the facts, but once again, not one of the Mainstream Media outlets bothered to reply.

What I emailed many Top Mainstream Media News Outlets and Ombudsmen:

Why Israel Put Mordechai Vanunu Back In Jail

On 24 April 2004, which was three days after Mordechai Vanunu was released from 18 years in a windowless tomb sized cell jail for providing the photographic proof and telling the truth about Israel’s clandestine seven story underground WMD Program in the Negev, Uri Avnery wrote:

“Everybody understands that he has no more secrets. What can a technician know after 18 years in jail, during which technology has advanced with giant steps?

“The Americans, it seems, are very worried. The Israeli security services have to dance to their tune. The world must be prevented by all available means from hearing, from the lips of a credible witness, that the Americans are full partners in Israel’s nuclear arms program, while pretending to be the world’s sheriff for the prevention of nuclear proliferation.” [1]

The day before Vanunu returned to jail he emailed me:

MOSSAD SHABACK FOR PUTTING ME BACK IN PRISON AFTER 24 YEARS FOR SPEAKING THE TRUTH.

SHAME ON YOU. ISRAEL DEMOCRACY, KNESET=BET KNESET=SINAGOUGS DEMOCRACY FOR NOT LEARNING IN 2000 YEARS THAT THE BASIC RIGHT IN DEMOCRACY IS FREEDOM OF SPEECH.

SHAME ON YOU ALL THE ARABS STUPID SPIES FROM EGYPT TO DUBAI SAUDI,LEBANON.JORDAN FOR LET ME GO BACK TO PRISON.
SHAME ON YOU. US SENATE CONGRESS WHITE HOUSE. UN IAEA MOHAMED ELBARADY FOR NOT PROTECTING MY FREEDOM.

SHAME ON YOU ALL THE RELIGIOUS STUPID SPIES JEWS, CHRISTIAN, MUSLIMS, BIG SHAME ON YOU FOR NOT BRINGING MY RELEASE IN 24 YEARS, RELIGION IS BIG BULLSHIT SHOW,

SHAME ON YOU.ALL THE WORLD STUPID SPIES CIA FBI MI5 MI6 AND ALL THE STUPID SPIES OF EVERY STATE WHO WANT ME BACK IN PRISON YOU WILL NOT GET ANY THING FROM ME.

FREEDOM AND ONLY FREEDOM WILL SURVIVE AND CONTINUE FOR EVER,

VMJC FREEDOM AND ONLY FREEDOM I NEED NOW.

I posted a link to the above article on Vanunu’s WIKI page, and when it was deleted, I emailed WIKI inquiring why and was informed:

“Wikipedia is governed by consensus, and no one editor may have ultimate control over what is and is not included in an article, including determination of the inclusion of links to articles outside of Wikipedia. This includes editors who may be reporters, plumbers, governors, senators, presidents, kings, emperors, or whatever other position of authority outside Wikipedia they may hold.”

Another member of the WIKI team explained:

“Wikipedia’s role is to be an encyclopedia, and not a news source or analysis/opinion/commentary source. Most newspapers and magazines combine those two roles to some degree. Wikipedia, as an encyclopedia, isn’t here for those purposes. We’re here to be a reference source of record…

“Wikipedia’s role is to be an encyclopedia…It’s appropriate to bring your ongoing coverage of Mr. Vanunu to the attention of those of us who sometimes edit the article to update and improve it. The most appropriate way to do that would be to post links to print media publication of your articles on him…”

I very much appreciate your clarifications and thus, I have more questions.

RE: Wikipedia’s role is to be an encyclopedia

Doesn’t that mean that reporting accurately as to WHY Vanunu was returned to jail should be included?

As I have been following Vanunu’s trial beginning from day one: 25 Jan. 2006 and THE PRINT MEDIA has failed miserably in their ‘coverage’ as to WHY he went back to jail for 3 months with errors and omissions, seems to me that setting the record straight should be a part of an encyclopedia.

RE: The most appropriate way to do that would be to post links to print media publication of your articles on him into the article’s talk page and invite other editors to review them for inclusion and update.

I have been contacting THE PRINT Media since 2006 TRYING to get them to REPORT on Vanunu’s case, even have contacted Ombudsmen-they never reply and as Vanunu said, here is WHY:

“Many journalists come here to the American Colony, from CNN and NY Times. They all want to cover my story, but their EDITORS say no…CNN wants to interview me; but they say they can’t do it because they don’t want problems with the Israeli censor. BBC is doing the same thing.

“Sixty Minutes from the United States from the beginning they wanted to do a program, but because of the censor situation they decide not to do it. Also big media from Germany, France, Italy, Japan. None of them wants problems with the Israelis.”

So, as The Print Media failed to do its job-I have stepped in.

Can you tell me what is wrong with linking to THIS article so as to set the record straight, which is the purpose of encyclopedias, isn’t it?

Why Israel Put Mordechai Vanunu Back In Jail Last Month

As I received no reply from my June 8 inquiry, I took it as a GO ahead and on June 12, 2010 I posted under “Imprisonment” on Vanunu’s WIKI page:

The link lead to the Salem-News.com article, but, once again the link disappeared, although “Salem-News.com is also the first exclusively Web news organization in the world. Not a blog, but a full service multimedia news site staffed by award-winning professional journalists and a wealth of diverse writers from all over the U.S. and also in places like Canada, Vietnam and Mexico. Salem-News.com was created as a present and future answer for the needs of a wide range of news consumers in Oregon, across the nation and around the world.”

On Vanunu’s WIKI Talk page a WIKI volunteer editor who “may be a reporter, plumber, governor, senator, president, king, emperor, or whatever” informed me

Dear Eileen, I understand that you have a great deal of insight into the matter of Mordechai Vanunu, more than myself and many other Wikipedia contributors. But it is not acceptable to publish your own material on other sites and then push it as a valid source. Vanunu’s situation is a high profile case and well-established facts should be mentioned by several other independent sources. Please consider replying to the criticism and comments on this talk page, as it stands right now you are either unaware of our efforts to inform you regarding Wikipedia policy or simply ignoring our efforts. Surely you realize that you have more to gain from complying than trying to work against the project. Let’s give Vanunu and our readers what they deserve, a factual, encyclopedic and well-written article regarding his life and actions. –03:40, 14 June 2010 (UTC) I have no desire to engage in a battle with any “reporter, plumber, governor, senator, president, king, emperor, or whatever” but I am in solidarity with giving readers factual, encyclopedic and well written material regarding Vanunu’s life and actions, and this is all she wrote on that: BEYOND NUCLEAR:

And I will persist to report on ongoing injustice that The Media doesn’t and WIKI doesn’t want to allow.