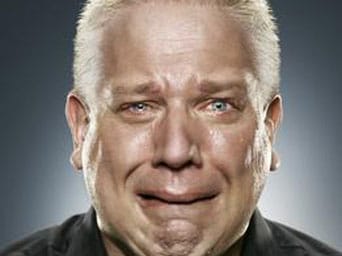 “It is hard to imagine that the story of the Zionist land grab of Palestine could go down in history as the redemption of the world Jews and a courageous act that need to be restored by a hypocritical Zionist mouthpiece like Glenn Beck.”

“– We should go east into Transjordan. That will be a test to our movement.

– Nonsense, isn’t there enough land in Judea and Galilee?

– The land in Judea and Galilee is populated by the Arabs

– Well, we’ll take it from them; we’ll harass them until they get out, let them go to Transjordan. As soon as we have a big settlement here, we’ll seize the land, we’ll become strong, we’ll expel them from there too … let them go back to the Arab countries.”

… That was part of a dialogue between two pro-Zionism advocates in 1891 and the intro of the famous documentary “The land speaks Arabic” in which Dr. Nur Masalha, a Palestinian professor of politics and history reveals through his ‘Post-Zionism’ and ‘new history’ argumentation the hard to disguise anymore neo-colonialist ideas on which the Jewish state of Israel was established, namely the ‘transfer’ and ethnic cleansing of Palestinians.

This highly criminal plan of transferring an entire indigenous population did in fact require, besides the international political duplicity, a parallel substance of brazen imprudence and methodical terrorism carried out by the then terrorist Zionist guerrillas , the Stern Gang, Haganah and the Irgun group, the infamous right-wing Zionist militants responsible for the King David hotel bombing operation and commissioned under Jabotinsky’s teaching to deter the Palestinians and disrupt the genuine fabric of the Arabic society in Palestine in the 1930s through mass murder and terrorism.

It is hard to imagine that the story of the Zionist land grab of Palestine could go down in history as the redemption of the world Jews and a courageous act that need to be restored by a hypocritical Zionist mouthpiece like Glenn Beck.

Beck in Jerusalem without tears nor cheers. 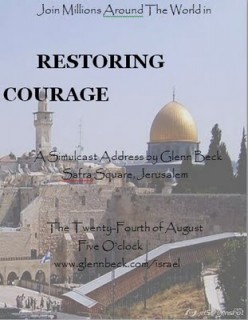 And you must draw courage from the knowledge that you were led to this land by God. And in the affairs of mankind, God is not a stranger to the children of Abraham.

He promised that Israel would rise again. For two thousand years the Jewish people held on to this promise. We have seen the promise fulfilled.

Israel, we have witnessed the dawn of your redemption.

We live in an age of manmade, technological miracles. But these are the days of divine miracles.

Not by the hand of any man, whether his name is Balfour or Truman, does Israel exist. Israel is here because the God of Abraham keeps His covenants.

In the 40 years of wandering in the desert, the ancient Hebrews were led through the dark of night by a pillar of fire.

Courage is the act of walking into the darkness, and knowing that each step would be guided and protected by the pillar of fire, if we follow it. God is with us.

I will admit, I did not know this, until very recently.”

… Thus Said Glenn beck in his latest speech delivered in Jerusalem in what was expected to be a mass rally dubbed “restoring courage“, or rather restoring the bits and pieces left of his right wing fundamentalism and media mania after he was kicked out of Fox.

I believe Mr. Beck when he said he didn’t know this until recently, but I also believe that he has neither a right nor a proxy to assume a prophet’s intonation and speak on behalf of God and describe the Israeli military occupation of Palestinian land as yet another divine miracle.

This Israeli military takeover of the Arabic land with the premeditated plan for the transfer of its whole indigenous population could not and should not be cloaked in the shrouds of piety as Beck’s recent and flimsy knowledge of the Israelite story clearly shows.

Beck is as clueless about the true meaning of the story of the chosen people as many of the Hebrew Bible followers who listened many times to, but never contemplated, the historically refuted story of the exodus of the ancient Israelites from Egypt after alleged tale of years of enslavement and torture, wandering in the wilderness for 40 long years and then getting the divine clearance/visa to enter a land historically known as Canaan, but from the Hebrew Bible’s perspective called the land of milk and honey or better yet the promised land.

During that ancient time and as the Israelites were about to invade Canaan they were led by Joshua, a biblical figure said to be Moses’ assistant for he was most gifted as a spy, so he sort of did the job of Mossad for the Israelites in the famous story in that remote era in history.

The Israelites reached Canaan but to their astonishment, though no one of them seemed astounded since they had Yahweh on their side to do all the thinking, the Promised Land was not empty; it was not some deserted terrains with a big sign at its gate saying “welcome my dear and chosen children to the promised land, please take a number and wait in line”

The whole of Canaan, with Jericho included was inhabited with people who had their own culture, religion and language, in other words, the Promised Land was a land of milk and honey alright, along too many other resources, but only with a tiny and rather inconvenient obstacle, it was unfortunately populated with indigenous people who not only ever attacked or provoked the Israelites but also never heard of them before.

According to the story, Joshua was commanded by his god upon the crumbling of the walls of Jericho, that mysteriously collapsed like the 911 towers, to kill every man, woman, child and farm animal in Canaan. And that he did with the rest of the so called chosen people and children of god without a blink of shame, Hesitation or remorse.

Socio-politically speaking, the massacre of the Canaanites is described as blatant and unabashed act of genocide, but biblically speaking, it is reverently referred to as a divine land grant regardless of all the killing of innocent men, women, children, animals and even babies still inside their mother’s wombs.

Couldn’t we learn anything from history?

Now if we jumped ahead thousands of years we will be astounded by the similarity of the same crimes of genocide committed in Palestine by the Israelis and their modern spy agents of Mossad.

But the more astonishing is the fact that after thousands of years of dauntless efforts to reach the realm of separating facts from myths and after painful sacrifices to reach new grounds of shared values of respected freedoms and human rights the world conscience is still quite at ease with the ongoing ethnic cleansing of Palestinians, if not indifferent to the whole crime, to say the least.

Another Bin Laden but in a smart suit

Back to Mr. Beck’s bold speech as he went on and said

“Everything we know about human rights and civilization came from this place. Whether you live by 613 commandments or 10 or just one golden rule, they all came from here, this throne of the Lord.

Mr. Beck’s ignorance, knowing not that the human conscience dawned from ancient Egypt rather from the teachings of some pastoral nomads, and his brazen hypocrisy surprised me not, for he was just being himself.

But the weird thing is that nobody caught him in tears as he was ass-kissing the few bunch of Israelis who showed up for his pathetic performance.

Glenn Beck is virtually no different from other religious extremists like Osama bin laden or rabbi Ovadia Yosef except for the chic suit he wears and the celebrities of the like-minded as Jon Voight who regularly attended his campaigns of restoring fear and reconstructing the foolish milieu of the ages of medieval fanatics who accept no creed other than their own as a legitimate path to God, and who seem intent on hastening the arrival of their version of Armageddon.

With the tenth anniversary of 9/11 a few days away and with the majority of honest scientists, experts and intellectuals attesting to the fact that the collapse of the world trade towers is a false flag operation done by a covert agency that managed to pull out the biggest demolition scam ever in history, next to of course the mythical collapse of the walls of Jericho, how could America prevail over militant Islamism whom was scapegoated for 9/11, with such a backward religious thinking promoted by fanatics like Glenn beck and John Hagee.

The next time Mr. Beck will visit Israel, which I reckon will be soon after the UN will have rejected the Palestinian bid for statehood, thanks to the United states’ only good for Israel brokering peace efforts and timely vetoes, his eyes will be sore and wet all day, not from the poignant ambience of being in the company of the chosen children of god, but from the highly irritant smoke emitted from tear gas canisters and grenades the Israeli settlers in the west bank will be firing this September on the angry and stateless Palestinian protesters or in other words, the few thousands left of the descendants of the ancient Canaanites.