Susan Lindauer’s piece of the 9/11 puzzle adds more evidence to support the charge of criminal negligence at the command level and exposes the utter depravity of the Patriot Act.

Even more, as the primary Intelligence Asset for Iraq, she proves that top officials of the Bush regime were fully aware that Iraq had no weapons of mass destruction prior to the invasion, and had, in fact, negotiated a peace treaty in order to end UN sanctions.

To tell this truth cost her her job, her freedom and almost her sanity.

In “Extreme Prejudice: The Terrifying Story of the Patriot Act and the Cover ups of 9/11 and Iraq,” we learn that not only was the US government (USG) willing to kill (or allow to be killed) thousands of its own citizens on that indelible day, it has gone to extreme lengths to silence whistleblowers.

Lindauer, a U.S. Intelligence Asset from 1993-2002, escaped a “chemical lobotomy” at the hands of government conspirators – including her own cousin, Andy Card, Chief of Staff for George W. Bush – only because the alternative media stepped in at the eleventh hour and exposed her false arrest and imprisonment. Michael Collins’ breakthrough article, American Cassandra, was reposted across the world in 2007.

Extreme Prejudice reads like a spy novel; it’s exciting, horrifying and compelling.  It offers an informed view of the geopolitical scene in the years just before and after the 9/11 attack, and the extraordinary lengths the USG went to in trying to hide or justify the illegal invasions that followed.  It’s a slice of American History that patriots, as well as actors on the global stage, need to know. 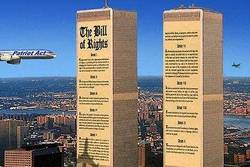 As an Intelligence Asset, Lindauer worked on anti-terrorism for the CIA and the Defense Intelligence Agency (DIA) on Libya and Iraq.  An “Asset,” she explains, is a private citizen with expertise or interests that grant them access to the group targeted by U.S. intelligence. They are paid from the Black Ops budget.

That’s mostly true, anyway. Lindauer reports that her CIA handler, Dr. Richard Fuisz, stiffed her on the last Iraq project – the one that negotiated a peace deal prior to the US invasion.

For her two years of work, she was paid $2,500.  Fuisz personally kept the $13 million awarded by Congress.  He now has an $8 million mansion, courtesy of US taxpayers.

As a graduate of one of the elite Seven Sisters Colleges (Smith), with a graduate degree from the London School of Economics, Lindauer gained “close, personal exposure” to the sons and daughters of high ranking government ministers and diplomats from around the world.

She describes herself as a life long peace activist who came to oppose sanctions and promote diplomacy in resolving international conflicts.  Though she staunchly opposed the United Nations sanctions against Iraq, she maintains that the UN should take a stronger role in conflict resolution. Dialogue, she insists, is key.

Through her contacts, at the age of 29, she learned that Islamic fundamentalists from southern Egypt planned to bomb the World Trade Center in 1993.  She warned a diplomat at a National Press Club lunch in late 1992, and met with his Embassy official in D.C. two days before the WTC attack on February 26, 1993.

That she had such knowledge caught the attention of U.S. Intelligence, who recruited her later that year.  All went well until 2001.

Lindauer is one of many who provided pre-911 intelligence to Bush officials of an impending attack involving airplanes and the World Trade Center.  At the very least, she suggests, anti-aircraft missiles could have been mounted on the top of the WTC Towers to protect against such an aerial attack.  But no defensive measures were taken.

And, as we all saw on 9/11, the best-funded and most technically advanced military in the history of the world did absolutely nothing to stop the attacks.  From 8:15 AM, officials knew a plane had been hijacked.

From 8:45 AM, after the first strike on the WTC, officials knew that hijacked planes were being used as weapons, just as Lindauer had warned Attorney General John Ashcroft and the Justice Department’s Office of Counter Terrorism in August.

A full hour later, the Pentagon was attacked. Not a single defensive shot was fired. Many believe only a Stand Down order can explain this. Criminal negligence at best.

By 2001, global pressure to end the decade-long trade embargo on Iraq mounted as it became clear that sanctions were killing 11,000 innocent people a month, and yet no WMDs had been found in all the inspections.  Worse, jihadis were drawn to Iraq because of the destabilization wrought by the UN trade embargo.  These fundamentalists threatened Saddam Hussein’s secular authority and he wanted them out.

As the primary Asset for intelligence on Iraq who worked for two years on a comprehensive peace initiative with the Iraqi government, she knew the nation did not have weapons of mass destruction and she knew the US knew.  Iraq wanted an end to UN sanctions and it was willing to open itself to US contracts in every sector it demanded.  Iraq was also willing to hold elections and allow international monitors, as part of the peace deal.

“Peace was breaking out,” she explains. “Saddam’s government urgently desired to reconcile with the United States,” hoping that Bush would lift the sanctions.

All of this was conveyed to her Case Officers, who were responsible for passing it on to policy makers.

But under a criminal regime, facts and peace treaties can’t get in the way of war plans.  Total control of Iraq was the goal, and a negotiated peace accord didn’t meet that objective.  On March 19, 2003, the USG declared war on Iraq, insisting it had WMDs – a bald faced lie. 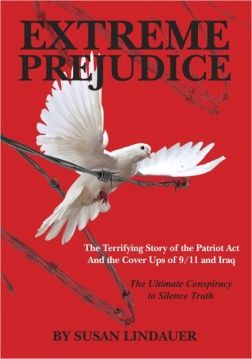 When the lie didn’t meet the facts on the ground after the invasion, a Congressional investigation of prewar intelligence ensued.

Lindauer notified every Member of Congress of the nature of her information and its potential to divert war.  A month prior to her arrest on March 11, 2004, she contacted Senators John McCain and Trent Lott, “practically demanding” to testify at those hearings.

For that, Lindauer was arrested under the Patriot Act, becoming one of the first non-Arab U.S. citizens to feel the unconstitutional weight of this tyrannical piece of legislation.

Jose Padilla was the first.  Held without charge for four years, he was tortured into catatonia, brutally brain damaged by authorities at a South Carolina military brig.  A federal district court recently granted immunity to former Defense Secretary Donald Rumsfeld (and others) for these crimes.

Lindauer was charged with “acting as an Unregistered Iraqi Agent” in “conspiracy with the Iraqi Intelligence Service.”  The charges were fraudulent, and US authorities knew they were bogus.  She had met with Iraqi diplomats at least 150 times over a period of several years and immediately reported those meetings to the CIA and DIA.

In addition to several other charges including “Organizing Resistance to U.S. Occupation,” the indictment included two “secret charges” for which the prosecution, under the Patriot Act, does not have to produce evidence and for which she would be imprisoned for five years.  She was charged with undisclosed crimes supported by undisclosed evidence which the jury would simply have to take on faith.

How’s that for turning the Bill of Rights on its head?

She suspects that one of the secret charges related to her attempt to collect Iraqi health records, after the use of depleted uranium by US forces caused cancer rates and birth deformities to soar.  Not only would genocide be proved, but healthcare for US veterans and their offspring would be required.

The Bush-Cheney cabal wanted to bury the Iraq peace deal, and was willing to chemically lobotomize its primary Iraq Asset to keep that information secret.  So, they accused her of being mentally incompetent.

Much of the book addresses how this played out, including her incarceration at Carswell, a federal prison located on a military base in Texas, known for its medical abuse of prisoners.

Lindauer was lucky to escape their clutches, winning her full and final release in 2009, five days before Obama’s inauguration.  Having never signed a Non Disclosure Agreement, she began writing her book and published it last October.

Whatever we may think about spies and their role in expanding the corporate empire, as John Perkins explained so well in Confessions of an Economic Hitman, Susan Lindauer showed true grit on behalf of peace, in the face of powerful domestic enemies: Dick Cheney, John McCain, Andy Card, John Ashcroft, Colin Powell and torture architect Alberto Gonzales.

As we approach the tenth anniversary of that horrific day, as we contemplate the millions of lives destroyed by illegal wars in the Middle East and, now, North Africa, and as international hearings are being held next month, the 911 Truth movement has another strong voice providing serious evidence to justify bringing Bush, Cheney, Rumsfeld, Rice, and all the others to justice.

Despite everything that happened to her, Lindauer writes, “Allowing thousands of your own citizens to suffer horrible deaths in order to rationalize an unnecessary War should be judged the most terrible crime of all.”