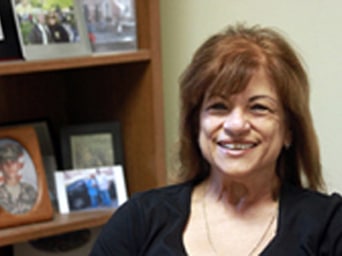 Arlene Adams-Cataldo, RN, BSN, CARN, CASAC, served in Vietnam and is also on the Vietnam Women’s Memorial Foundation Board. She currently works, as she has for the past 26 years, at Northport VAMC supporting the challenges of treating patients with addiction.

Married very young, she joined the Army in the late 1960s during a period when she was struggling with family issues. She left her young children in the care of her parents and enlisted in the United States Army Nurse Corps. She served two tours in Vietnam from 1969-1970. She and friends who enlisted at that time believed they would put their skills to good use. But, she said, “I was very unprepared for the combat conditions. It was action from the minute I got to Cu Chi – as a civilian nurse, you expect to save lives. You don’t expect to feel helpless and unable to save lives. The 12th Evacuation Hospital I was in was constantly shelled which made it very scary.”

Adams-Cataldo continued, “We would evacuate the soldiers out if they needed additional surgery. One of the many things I remember is the smells and the humidity. It wasn’t a vacation spot.”

Despite the hardship, Adams-Cataldo values her service experience. “I met people I wouldn’t have met otherwise. I felt useful, but I couldn’t get over the useless deaths of young boys. When I came back, I worked at a community hospital and I never said anything about Vietnam.”

A few years after returning to the U.S., Adams-Cataldo joined the 344 Evac Reserves and the interactions with Veterans who had gone through similar trauma was productive. “It made me feel more comfortable because I was working with nurses and soldiers who had served in Vietnam and we talked about PTSD.”

Coming back to her children wasn’t hard for them, “but it was hard for me. Adjustments were needed on both sides,” she recalled. Looking back, Adams-Cataldo said, “I’ve never felt that I was a war hero. The soldiers that lost their lives and those who came back. They are the true heroes. I’m not a war hero.”

As the years have passed, personal relationships have been difficult for Adams-Cataldo, who had two failed marriages. But, she has never had any problems with drugs or alcohol. She said what helps with life’s struggles is work. “I love working at VA with Veterans. Working with patients who have issues with addiction and PTSD is very interesting and satisfying.”

Keeping the memory of Vietnam alive is important for Adams-Cataldo. For the past 12 years, she and three other Vietnam Veterans from the PTSD Unit at Northport VAMC have coordinated an annual trip to Washington DC on Memorial Day. In addition, twice on every fifth anniversary year of the Vietnam Wall, she leads groups of Veterans on two visits to pay their respects at the Wall and at the Vietnam Women Veterans statue.

Adams-Cataldo also noted that she is very much involved with the Foundation and its activities. “But you never really heal. I think about that I see the young nurses coming back from Iraq and Afghanistan. She was with fellow Vietnam Veteran and friend Edie Meeks, RN, at a recent Memorial Day event in Washington, DC, where they were listening to a young nurse who had just come back from Iraq. As the nurse was sharing her story at the Women’s Memorial, “We looked at each other. The nurse’s eyes were vacant. Edie said, ‘did we look like that?’ And,I said yes,” recalled Adams-Cataldo. “Although we never talked about our experience when we returned. Now, they do and it helps.”

Clinical Trials Week April 18, 2011 Dr. Marks is Associate Professor in the Department of Surgery and Director of Surgical Endoscopy at University Hospitals at Case Medical Center in Cleveland, OH. His team presented the interim topline results of the study during a podium presentation at SAGES 2011, the annual meeting of the Society of American Gastrointestinal and Endoscopic Surgeons, which took place in San Antonio, TX from March 30 to April 2 (see also Gastroenterology).

The prospective, randomized, controlled trial was designed to assess the feasibility and safety of performing gall bladder surgery via a single incision through the belly button with the aid of Covidien’s SILS Port. The study protocol allows participating surgeons to objectively document the scientific merit and the perceived advantages using the SILS Port through a single incision over a traditional laparoscopic technique (four incisions). The participating surgeons will monitor patients in the study for a year after the procedure to track their pain, quality of life and the cosmetic appearance of their abdomens. gallbladdersurgerynow.com gall bladder surgery

All 200 patients have now been enrolled in the study; this data analysis includes preliminary results of 189 patients.

The 111 patients who underwent gall bladder surgery with the single incision approach reported significantly better cosmetic outcomes up to three months after their procedures, compared to the group whose surgeons used four laparoscopic ports. The pain scores between the two groups were within one point of each other on a 10 point visual analog scale rendering pain as clinically similar between the two groups. Surgeons, on average, took 12 minutes longer to perform the gall bladder surgery with the single-port approach (57 vs. 45 min., p<0.0001), but there was no difference in blood loss during the operation.

“Covidien is dedicated to collaborating with the surgical community to generate evidence that supports the use of its innovative products to help patients achieve better outcomes,” said Michael Tarnoff, M.D., Chief Medical Officer, Covidien. “This is one of the largest prospective studies of the SILS technique conducted to date in the U.S. Covidien’s surgical devices business is firmly committed to bring products like the SILS Port to market that aim to reduce the surgical footprint.” About the Covidien SILS Port Covidien’s SILS Port is an advanced surgical product designed to allow laparoscopic surgery through a single incision. This product is designed to give surgeons the ability to use multiple instruments with maximal maneuverability through a single incision in the patient’s umbilicus (belly button). The SILS Port leaves a hidden scar when used in the umbilicus and may minimize postoperative pain when compared to traditional open procedures. ABOUT COVIDIEN Covidien is a leading global healthcare products company that creates innovative medical solutions for better patient outcomes and delivers value through clinical leadership and excellence. Covidien manufactures, distributes and services a diverse range of industry-leading product lines in three segments: Medical Devices, Pharmaceuticals and Medical Supplies. With 2010 revenue of $10.4 billion, Covidien has approximately 42,000 employees worldwide in more than 65 countries, and its products are sold in over 140 countries. Please visit www.covidien.com to learn more about our business. go to site gall bladder surgery