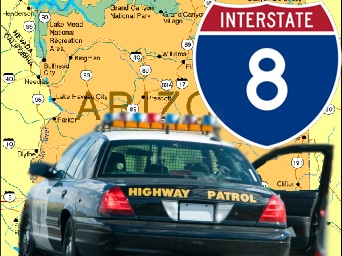 CBS/AP) RENO, Nevada – A World War II era fighter plane plunged into the grandstands Friday during a popular annual air show, injuring at least 75 spectators and leaving a horrific scene of bodies and wreckage. The plane’s pilot and at least two others were confirmed dead. An air race official said more deaths are likely.

A spokesperson at the Renown Regional Medical Center said that 22 people were admitted there and that two had died. Nine others were in critical condition and 11 in fair condition.

It has not be confirmed that the officers were hit, we are waiting for an update.

The DPS officers were searching for a drug cartel look out post well within the USA, a DPS Swat team and County Sheriff’s deputies are currently searching the area for the narco terrorists. Currently DPS has one suspect in custody while the manhunt continues.

I will keep you updated as news becomes available.

Shots have been heard from Davis Monthen Air Force Base in Tucson.  We have dispatched staffers to the scene after receiving calls from Air Force sources indicating an unknown shooting/robbery/terrorism incident on the base.

Mixed reports have the base school on lockdown.  Nothing reliable has come out of the base yet, we are waiting for news from the scene.