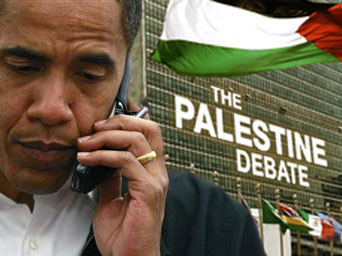 The extraordinary tableau Wednesday at the United Nations underscored a stark new reality: the United States is facing the prospect of having to share, or even cede, its decades-long role as the architect of Middle East peacemaking.

It’s over.  The USA, occupied by the Zionist agenda, lost its global way forward abdicating its’ place at the head of the global table leaving liberty, freedom, and justice in the dust as it could NOT muster the moral fortitude to get up and stand up for the rights of the global peoples who once, in the 20th century, admired her and dreamed of one day joining her in the land of opportunity.

Even before Mr. Obama walked up to the General Assembly podium to make his difficult address, where he declared that “Peace will not come through statements and resolutions at the U.N.,” American officials acknowledged that their various last-minute attempts to jump-start Israeli-Palestinian negotiations with the help from European allies and Russia had collapsed.

American diplomats turned their attention to how to navigate a new era in which questions of Palestinian statehood are squarely on the global diplomatic agenda. There used to be three relevant players in any Middle East peace effort: the Palestinians, Israel and the United States. But expansions of settlements in the West Bank and hardening of Israeli attitudes have isolated Israel and its main backer, the United States. Dissension among Palestinian factions has undermined the prospect for a new accord as well.

Now, the USA faces a new world where it’s just another country.  No longer will it be allowed “carte blanche”.  It must answer to a global community order; a new world order so to speak.

Obama actually is NOT the bad actor here.  This has been a long time coming.  The writing was always on the wall. In fact, Washington politics limited Mr. Obama’s ability to try to break the logjam if that means appearing to distance himself from Israel. Republicans mounted a challenge to lure away Zionist Jewish voters who supported Democrats in the past after some Zionist leaders sharply criticized Mr. Obama for trying to push Israel too hard.

Zionism is and has been omnipresent in American politics for decades.  It has served its assigns well.  Unfortunately, for the American public, it’s been a global disaster.

Over the last 63 years, US taxpayers have funded the colonization and occupation of the indigenous populations of the holy land.  Hundreds of billions of dollars have been spent, many say squandered, ending in a thud at the United Nations this week when the USA was called upon to support millions of oppressed peoples living in modern-day concentration camps.  Instead, it passed the ball and said “Let’s NOT Roll”.

With Zionist organizations posing as American lobby agencies ie… AIPAC and Abe Foxman’s ADL, the American public has ultimately been abused ending up alone in the ugly corner of the global room wondering “How the hell did we get here?”