Home Government Obama Proves Zionism Rules US and He is NOT on The Side... 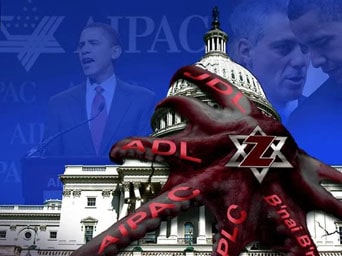 President Obama’s speech today at the UN drew immediate praise from Israeli Prime Minister Benjamin Netanyahu for his efforts to dissuade Palestinian leaders from pushing for a United Nations vote on statehood, calling Obama’s actions a “badge of honor”.

The simple truth is that Obama has dishonored the values of America just as much as Governor Rick Perry did standing shoulder-to-shoulder at a news conference with advocates for annexing West Bank settlements and Michele Bachmann saying Israel should never give up any land on the West Bank.

Recognition of a Palestinian state in the UN would in no way prevent direct negotiations with Israel but would gain for Palestinians citizenship, passports and sovereignty, obtain legal protection against violence by Israeli settlers and the right to fight back in self-defense if attacked with potential backing from international tribunals such as the International Criminal Court and the International Court of Justice.

Obama began his UN speech by citing President Franklin Roosevelt, stating, “He knew that a victory in war was not enough. As he said at one of the very first meetings on the founding of the United Nations, ‘We have got to make, not merely peace, but a peace that will last.’”

President Theodore Roosevelt warned, “Patriotism means to stand by the country. It does not mean to stand by the president or any other public official” and thus, this citizen of conscience for US House of Representatives confronts and challenges hypocrisy in high places.

At the UN,Obama did admit “we stand at a crossroads of history with the chance to move decisively in the direction of peace. To do so, we must return to the wisdom of those who created this institution. The United Nations’ Founding Charter calls upon us, ‘to unite our strength to maintain international peace and security.’ And Article 1 of this General Assembly’s Universal Declaration of Human Rights reminds us that, ‘All human beings are born free and equal in dignity and in rights.’ Those bedrock beliefs — in the responsibility of states, and the rights of men and women — must be our guide.”

In solidarity with that, I participated in an online post-Obama UN speech conference call coordinated by IMEU/Institute for Middle East Understanding with Dr. Ashrawi, senior member of the PLO Executive Committee and longtime advocate for Palestinian human rights.

Dr. Ashrawi expressed the alarm we both felt at Obama’s disconnect from reality, stating, “If you don’t know the facts you would think the Palestinians were occupying Israel!”

Dr. Ashrawi also spoke about Obama’s lack of human empathy and how he has tried to delink the Arab Spring from Palestinian suffering while ignoring the positive, legal, constructive and human efforts of seeking UN membership as D.C. has been “blackmailing everyone against us.”

At around the 30-minute mark, I was introduced as a correspondent for VT but I added I also am a candidate for US House of Representatives.

My question was regarding theestablishment of Israel’s very statehood being contingent upon their upholding the UN UNIVERSAL DECLARATION OF HUMAN RIGHTS and Israel’s own Declaration of Establishment of May 14, 1948, promising that Israel would be faithful to the Charter of the United Nations. But as Israel has not complied and as the UN was the body that partitioned that piece of real estate, is not the UN the body most responsible for ending this conflict?

Dr. Ashrawi responded, “Yes, Eileen this is an excellent question!

She went onto explain that “Israel’s membership was accepted on the condition it accept Resolution 181 and 194 which pertains to Palestinian refugees and on their return ‘as soon as possible’ which does not mean 63 years later.

“Giving people who own 7% or less of the land 55% of it is an historical injustice that has never been resolved.

“Israel not only has no constitution it also refuses to define its boundaries because it expands as it goes along. And it depends on what it calls its overriding Security concerns where it seems to think Security comes from annexing other peoples land and expanding indefinitely…and of course acting illegally.

“The UN and its Member States are responsible to curb Israel and hold it accountable. But Israel acts with full immunity and impunity because the international community led by the US has allowed this preferential treatment, sense of exceptionalism and entitlement that has allowed Israel to be an occupying power.

“Yes, the UN should hold Israel accountable and hold it to its commitment to the Universal Declaration of Human Rights.”

In his speech Obama admitted,“Peace is hard. Progress can be reversed. Prosperity comes slowly. Societies can split apart. The measure of our success must be whether people can live in sustained freedom, dignity, and security. And the United Nations and its member states must do their part to support those basic aspirations. And we have more work to do.

“But we will always stand up for the universal rights that were embraced by this Assembly. Those rights depend on elections that are free and fair; on governance that is transparent and accountable; respect for the rights of women and minorities; justice that is equal and fair. That is what our people deserve. Those are the elements of peace that can last.

“One year ago, I stood at this podium and I called for an independent Palestine. I believed then, and I believe now, that the Palestinian people deserve a state of their own…Ultimately, peace depends upon compromise among people who must live together long after our speeches are over, long after our votes have been tallied. That’s the lesson of Northern Ireland, where ancient antagonists bridged their differences. That’s the lesson of Sudan, where a negotiated settlement led to an independent state. And that is and will be the path to a Palestinian state — negotiations between the parties.

“Let us be honest with ourselves.”

Indeed let US be honest and also have compassion, tell the truth and seek peace through justice, and I quote Obama, “that is what the United Nations should be focused on in the weeks and months to come. Now, even as we confront these challenges of conflict and revolution, we must also recognize — we must also remind ourselves — that peace is not just the absence of war. True peace depends on creating the opportunity that makes life worth living. And to do that, we must confront the common enemies of humanity: nuclear weapons and poverty, ignorance and disease. These forces corrode the possibility of lasting peace and together we’re called upon to confront them.

“To lift the specter of mass destruction, we must come together to pursue the peace and security of a world without nuclear weapons.”

And may it begin with US demanding Israel open up their WMD Facility [facilities?] to International Atomic Energy Agency inspectors who have never been allowed admittance to Israel’s Dimona plant:

Obama concluded stating, “Conflict and repression will endure so long as some people refuse to do unto others as we would have them do unto us…And when the cornerstone of this very building was put in place, President Truman came here to New York and said, ‘The United Nations is essentially an expression of the moral nature of man’s aspirations.’

“Peace is hard, but we know that it is possible. So, together, let us be resolved to see that it is defined by our hopes and not by our fears. Together, let us make peace, but a peace, most importantly, that will last.”

Peace is what you do and may every citizen of the world do something in pursuit of it.

I have: Come September:

And so has New York, New York that wonderful town, where people ride in a hole in the ground and the words of the prophets are written on the subway walls: