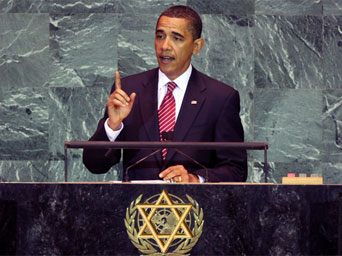 Hundreds of Millions in Middle East Throw Shoes at the TV

Today, U.S. President Barack Obama gave an empty rudderless speech to the United Nations General Assembly that was in need of dramatic and bold leadership on the question of Palestinian Statehood.

After an eloquent statement of standing up for peace, justice, and the rights of peoples around the world, Obama told us that “peace was hard” and that Israeli’s and Palestinians have to resolve this problem on their own directly insinuating that a vote by the U.N. would be fruitless.

Then he went into a 20th century political diatribe on how Israel and Jews have suffered around the world at the hands of evil doers even pulling out the good ole dusty Holocaust card circa 1940; of course, never mentioning the real-time 21st century suffering of Gaza under occupation.   It was very strange indeed; surreal is the word that comes to mind.

Clearly, the full court press is on.   Heck we even had the once disrespectful gambit of trying to upstage the U.S. President turned on full volume.  I mean with GOP U.S. Presidential hopeful Texas Governor Rick Perry standing outside on the NYC streets surrounded by his Zionist assigns throwing a stink bomb underneath the Obama podium where he questioned Obama’s love for Zionism, the speech ended up being a “I love Israel” fest complete with pledges and unwavering support.  It was amazingly transparent that Obama was neutered by the Zionist machine.

My first reaction was “Did Obama think he was giving a speech to AIPAC or the Floridians for Israel First Committee?  And was the ADL’s Abe Foxman squatting like a troll under the podium poking at Obama’s knees?   Can somebody tell Obama that he’s speaking to the global community?”

I mean where was the leadership?  Where’s the dramatic declaration that the U.S. will take the lead on justice, freedom and liberty not only for the region and its children but for our stability, security, and international standing as well?

Instead we get anti-American anti-Semitic Anti-Peace Zionist support rhetoric; a horrible display of contradiction and a real abdication of global leadership; just awful.

Just before Obama spoke, on CNN, Republican Florida Congresswomen Ileana Ros-Lehtinem said “we need to cut off the millions in aid to Palestinians 100% because they threaten our security” furthers saying that we can’t afford to send our taxpayer money abroad.  Of course, no mention that she votes for billions with a capital “B” in U.S. taxpayer monies to her constituents in Israel each year.  Of course, that does NOT count as taxpayer money abroad, as by her definition, Israel is not a foreign country!

Seems that President Obama has come to find out what all U.S. Presidents have eventually learned; that the Zionists control the show in Washington D.C. and the U.S. President is paid post for their interests;  Americans be dammed!

And so it goes….instead of global leadership, we get the neutered Obama while millions of children in both Israel and Palestine are negatively affected by the extremists in Israel and Washington D.C. who care not for peace but only for their psychotic agenda.