Home Veterans Iran Contra Redux: Have the Drug Cartels Staked Out Your Town... 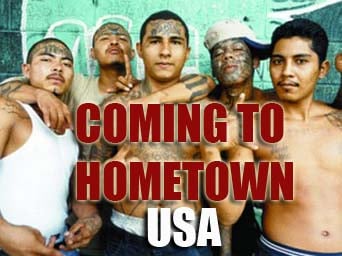 How the Game Has Changed On the Mexican Border

As if things could not get any stranger or more dangerous on the once quiet and peaceful Mexican Border. It was not that long ago when the border was a quiet peaceful frontier; that is no longer the situation.

On September 16th 2011 two Department of Public Safety Patrol Officers were ambushed on Interstate 8 between mile markers 143-148, the ambush was carried out by no less that 5 assailants, one suspect was captured and an AK-47 and a pistol was recovered. Interstate 8 is the primary pick up corridor for both drugs and illegal aliens that enter the USA illegally over the porous Arizona-Mexico border.

This escalates the cartel activity to a whole new level. I have been told by a reliable source that Arizona Law Enforcement Officers are under a direct violent threat to themselves and their families. Law enforcement personnel are constantly approached by the cartels with bribes and now death threats. The choice is take the money and become rich by helping us, or we will assassinate you and murder your entire family.

Recently three Deputies in Maricopa County have been indicted for corruption and cooperating with the cartels, all three were Hispanic. The Hispanic/Mexican officers have the greatest exposure and vulnerability, due to the nature of their extended families and their deep roots within the Hispanic/Mexican community. They are subject to the greatest coercion and leverage by the cartels.

We have the corrupt BATF, providing military grade weapons to the cartels, and not all the cartels have this advantage, the main beneficiaries are the Zeta’s and the Sinaloa Cartels. The Cartels who had members trained at the School of the America’s run out of Fort Benning Georgia, by implication the cartels that have connections to the Bush and Clinton crime families. (See my previous articles of August 17 and 20 2011, about how the Iran-Contra drug smuggling operations in El Salvador are alive and well and being implemented in Mexico).

In a recent article by Madison Ruppert  (Whistleblowers Reveal Tight Relationship Between US Officials and Drug Cartels Endthelie.com) it was revealed that corrupt US Law enforcement officers have sold a list of US Marshals to the Sinaloa Cartel complete with their home addresses and the cell phone numbers of the individual US Marshals. By itself the list of cell phone numbers does little, but the Cartels have access to the same technology that the Murdoch news agencies used to eavesdrop and monitor the telephone calls of the British Law Enforcement, Members of Parliament, and even celebrities, then the equation changes radically. This technology also allows the cartels to utilize the GPS capability in cell phones and pin point the exact location of anyone and everyone who has a cell phone, if the cartel has the cell number including the US Marshalls and every other citizen and law enforcement officer who has a cell phone, the cartels will find you and kill you. For the record, there are only 2 companies which provide this type of cell phone interception technology, both companies are Israeli, which creates another avalanche of questions about how far this corruption is advancing within the USA and the law enforcement community and how the Israeli’s are aiding and abetting the cartels in their efforts to corrupt US and Arizona Law Enforcement efforts.

In Mexico entire police departments have resigned en mass after threats from the cartels. The cartels are now employing the same fear and intimidation tactics against law enforcement officers in the USA. They will corrupt our law enforcement in the same manner. All Law enforcement officers now face the ugly choice of accepting an envelope of cash and helping the cartels or face an assassination of themselves and kidnapping and murder of their families. In any case Arizona Law Enforcement is or soon will be compromised and impaired from performing their sworn duty to up hold the law.

The corrosive effect of corruption is spreading fast. The Government of the USA has lost all legitimacy and is quickly losing the consent of the governed by failing at the primary mandate of every legitimate government, defending the borders and protecting the citizens. We have a fifth column of traitors within our elected government. Failure to defend the border is prima facie evidence of this treasonous fifth column.

This claim is supported by the announcement this week of the threat to National security by US ARMY Retired Major General Paul Vallely, who is the first national figure to propose an effective plan for the US government to actually secure the US border with Mexico. http://pronlinenews.com/?p=6820

The situation is out of control, the CIA which began drug trafficking in the early 1980’s as part of Iran-Contra, to circumvent congressional oversight must be dismantled. The CIA is a clear and present danger to the citizens and government of United States. Drug trafficking is unacceptable behavior for any government agency. Most importantly the CIA is committing genocide against the American people by providing dangerous illegal drugs to the citizens they are sworn to protect.

The Department of Justice and the Department of Homeland Security have lost all legitimacy by providing military grade weapons to the drug cartels, resulting in the death of Border Patrol Agent Brian Terry, and a multitude of deaths within Mexico, with the weapons the BATF provided to the Cartels.  The Department of Homeland Security is a bad joke, they are simply not effective in protecting the American citizens, they do a great job at inconveniencing travelers at airports, if DHS was effective the border would be secure, the border is not secure. Secretary of DHS Janet Napolitano was the Governor of Arizona; she has no legitimate excuse, except a political agenda, like I said there is a treasonous fifth column operating in Washington DC.

Prohibition did not work for alcohol in the 1920’s and it is not working now for illegal drugs. What is needed is a new approach; we need to revisit the entire concept of illegality and drug enforcement. There are some drugs that are relatively harmless, others are deadly toxins and poisonous to the users. Why is our own government, which outlaws drugs on one hand and then facilitates the smuggling illegal drugs into the country? For the money stupid! If drugs were not illegal there would not be an enormous profit motive. Once again we come face to face with the treasonous fifth column within our own government. These traitors must be rooted out and executed for these crimes.

Until we do things will continue to get worse and worse, the corrosive effects of unaccountable money will destroy the fabric of our unique culture.

In closing, I must commend the brave men on the front lines at the border, the men who live with this nightmare every day, Sheriff Joe Arpiao, Sheriff Paul Babeu, Sheriff Larry Dever and the brave men and women of their departments. All of the Sheriffs of Arizona have difficult jobs, which they perform with integrity and honor, in spite of the danger and difficult circumstances they face.

I also must commend JT Ready and the men and women of the US Border Guard; the brave Border Rangers who volunteer their time and resources to assist the Sheriffs and the Border Patrol to do the job our Federal Government refuses or simply cannot effectively perform. Please contact www.usborderguard.com/US_Border_Guard for information about how to volunteer or make a donation to support their valiant efforts.

These are all patriotic Americans who care about our country, unlike the scoundrels and treasonous bastards within the Federal Government who enable the death and destruction that the open and lawless border ferments inside the USA.

The problem of drugs and illegal aliens is no longer a border issue; it is a national security issue which affects every city and county in the USA. If the Federal Government we the people have empowered and trusted to secure the border and protect the American citizens will not do their job, then we the people must do it our self.

Once the border is secured and safe again, then we can begin deporting those who entered our country illegally. I look forward to that day when we no longer have the scourge of illegal aliens undermining our culture and destroying our country…