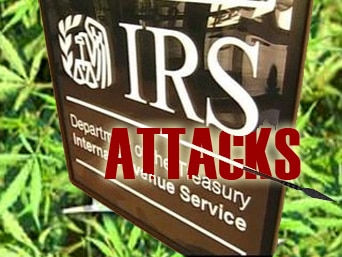 In one swift Katushka rocket strike of the legal pen, the Feds dropped a business nuke on the burgeoning medical marijuana industry.  The IRS has ruled that dispensaries cannot deduct standard business expenses such as payroll, security or rent.

WTF is this?  How the hell can one run a business and compete without deducting normal business expenses?

Harborside Health Center, one of the nation’s largest medical marijuana dispensaries and considered a model for the industry, is on the hook for $2.5 million in taxes from 2007 and 2008.  That is $2 million more than the Oakland, Calif.-based company paid for those tax years.

“I see only two outcomes here,” said Steve DeAngelo, director and chief executive of Harborside. “Either this IRS assessment has to change or we go out of business. There really isn’t a middle ground for us.”

DeAngelo says the ruling will likely be appealed. He has 90 days to respond to the ruling.

The IRS ruling is based on an obscure portion of the tax code — section 280E — passed into law by Congress in 1982, at the height of the Reagan administration’s “war on drugs.” The law, originally targeted at drug kingpins and cartels, bans any tax deductions related to “trafficking in controlled substances.”

Although 16 states and the District of Columbia have passed laws allowing the medical use of marijuana, the federal government still considers it a Schedule I drug, the most restrictive category with the harshest penalties.

The Internal Revenue Service refused to comment on the specific case, but letters sent from Andrew Keyso, IRS deputy associate chief counsel, to some members of Congress spell out the official position:

The news has spread rapidly through the cannabis community and is likely to have a chilling effect on businesses.

“We are all a bit nervous and frustrated,” said Ken Estes, owner of Patient To Patient Group Collective in San Jose, Calif. “We have tried to comply with every city, state and federal law. We ask for input from all the agencies. But we are still being punished for operating a legitimate business.”

Harborside, which celebrated its fifth anniversary Monday, serves 94,000 patients with 84 full-time employees and brings in about $22 million in annual revenue. According to DeAngelo, the center, set up as a not-for-profit business, pays about $1.1 million in taxes to the city of Oakland, $2 million to the state of California, and $500,000 to the federal government.

“We have no complaint about the taxes we pay,” DeAngelo said. “We are doing our part. All we ask is that we are treated like any other business enterprise. To treat us like criminals makes is simply wrong. Drug kingpins and cartels don’t file taxes. We do. But no business, including ours, can survive if it is taxed on its gross revenue. The IRS is trying to tax us out of existence.”

Keith Stroup, legal counsel and founder of NORML, the nation’s largest marijuana advocacy group, says the IRS ruling is likely to stifle the quasi-legal industry and force people back onto the black market.

“You know, Al Capone was taken down by the IRS, not by the FBI or the police. And I can assure you that Steve DeAngelo is no Al Capone,” Stroup said.

Stroup believes the move also could make it more difficult for the medical marijuana industry to capture significant capital investment. Medical marijuana is now a $1.7 billion market, according to a report released this year by See Change Strategy, an independent financial analysis firm that specializes in new and unique markets. The figure represents estimated sales of marijuana through dispensaries in states with medical marijuana laws.

Although the IRS declined to comment, Stoup says NORML has received e-mails from other dispensaries that are currently being audited and will likely receive similar rulings. “Harborside is one of the biggest, so that is why the IRS targeted them first,” Stroup said. “But there are other dispensaries that will suffer the same fate unless Congress acts.”

Some members of Congress have taken up the cause.

Reps. Pete Stark, D-Calif., Barney Frank, D-Mass., and Jared Polis, D-Colo., have introduced legislation to ensure the medical marijuana industry is treated like any other business.

“You’d think that a time of record budget deficits the IRS would be happy that a legal business is doing the right thing and paying its taxes,” Polis said. “Instead, the IRS seems intent on destroying a successful and legal business that creates jobs and strengthens our economy.”

The confusing legal situation is “an un-American loop of nonsense,” says Jerome Handley, a tax attorney in Oakland who has more than 100 clients in the medical marijuana industry. “My advice to my clients is simple: Document everything … and stay out of the spotlight.”

In that case, U.S. Tax Court Judge David Laro declared that Californians Helping to Alleviate Medical Problems (CHAMP), a medical marijuana provider, could deduct the majority of employee costs as caregiving expenses. The IRS sought $426,000 in back taxes and penalties, but CHAMP ended up paying a tax assessment of less than $5,000.

“This law is not about protecting citizens from criminals. It is a concerted effort by the federal government to crack down on a legitimate business,” Panzer said.

DeAngelo points out the apparent craziness of the law. “The IRS allows me to deduct my cost of purchasing cannabis, which is the controlled substance they say is illegal. But I can’t deduct my payroll or my rent? That, clearly, defies logic and common sense.

“Besides,” DeAngelo added, “have you ever heard of a drug trafficker that actually files a tax return? Me neither.”

Make no mistake people….the feds have waged war against the people again and they are hitting us with all the nukes possible.  With the Occupation of Wall Street ongoing, we are fighting back.  But let’s be very clear, the Federal government is at war against us; not Democrats or Republicans, but all of them.  They hate Americans!  They are assigns to the ruling class and we are the ones with no class.  We are NOT their slaves!  It’s time to take America back from the globalists posing as Americans.  Screw em!

Renee and the Drug Squad

Dedicated to American citizen Renee Boje from California who fought valiantly against the DEA and FBI for years as they tried to prosecute her for watering medical marijuana. As she fled to Canada, Canadian Judge Irwin Cotler tried to bend over for the FBI and extradite her but the good people of Canada fought back.

In the end, the FBI was forced to make a deal with Boje giving her probation instead of 25 years in jail as they wanted. She flew in, signed the deal, and promptly moved back to Canada where she lives with her family in freedom.

They put her in court in the land of the snow
Cotler said Renee that ‘s it’s time that you go
You’ve gotta face the man you’re a thorn in our plan
But she’s gonna give a fight cause she stands in the right
Renee’s been fighting against the drug squad
Renee’s a hero gainst the drug squad
Cotler!