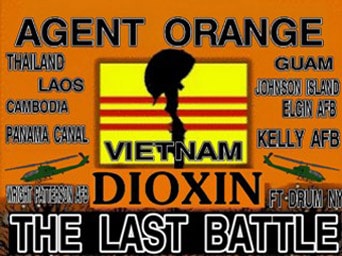 For 50 years we the people have had to deal with the fallout of Agent Orange… that’s 18,250 days; 5 decades; a half century; and misery for millions in terms of life-threatening illness, tens of thousands of birth defects and stillbirths, and a “life” time for many thousands more.

Agent Orange and its chief ingredient, Dioxin (a 50-50 mix of two chemicals, known conventionally as 2,4,D and 2,4,5,T), which was developed in the 1940’s, added to the US military arsenal of chemical weapons in the 1950’s, and produced by a dozen of manufacturers in the 1960’s, has been the cause of global misery, while the US Government has done everything in its power cover-up the facts. Even today, after all these years, with millions of pages of legal testimony, volumes of evidence, a train-load of scientific reports, and undeniable proof of lies and deceit, our government has nearly convinced the citizenry that Agent Orange is “a veterans problem” or a “Vietnam war mistake”, and that they are finally getting around to addressing the issue.

Folks…it’s the same old game. Certainly Agent Orange was associated with its use as a defoliant in Vietnam, and yes, it turned out to be a big mistake, BUT we cannot let the government throw the issue under the carpet with same disregard as a queen merely brushing crumbs from her crimson robe. During the French Revolution, the Comte de Provence, Louis XVI’s younger brother (and future King Louis XVIII) ascribed in his Memoirs the phrase, “let them eat cake” to his distant ancestor Marie-Thérèse of Spain, though it has been falsely attributed to Marie Antoinette. The remark was in reference to the starving peasants in France who were without bread to eat. It is that same arrogance and disregard that our government (the Veterans Administration and the Department of Defense) has shown our veterans for fifty years.

But let us not get sidetracked as had been the official policy of government into thinking this is “a Vietnam problem”. It is far from that, yet with many of its Agent Orange-Vietnam veterans now dead and dying from Cancer, Parkinson’s Disease, and other complications of AO exposure, Congress is finally getting around to address the gravity of the situation, after many limp-wristed attempts. Unfortunately they are pigeon-holing it in terms of it being a “the Vietnam problem”, and we are letting them bamboozle us again.

Am I the only one who has put the pieces of the puzzle together? Are we so in tuned with our own situation we have failed to look outside the box at the real miscarriage of justice and the millions of people Agent Orange has affected? It is time to take the blinders off. We have Congress with a bill in the House and a second bill in the Senate, discussing including the Navy personnel who are seeking recognition for inclusion in Agent Orange benefit overage without having to have had “boots on the ground”.  Wait a minute…Stop the presses!

“A veteran’s problem”, to a degree that may be true, BUT what about the millions of innocent citizens of the United States, Guam, Johnson Island, Canada, New Zealand, Laos, Thailand, Okinawa, Cambodia, Philippines, Korea, Vietnam Puerto Rico, and other countries, who are left in Agent Orange’s wake of devastation with unacceptable levels of Dioxin having laid waste to the land and water tables? What about the cities and towns across America where Agent Orange was manufactured, stored, used to control vegetation along to roads and highways, and then destroyed (Times Beach, Missouri; Nitro, WV; Anniston, Alabama;  Gainesville, Florida just to mention a few)? What about the use of Agent Orange in the Pinal National Forest (Arizona), and what about the many military bases across the country where Agent Orange was store and handled? And finally, what do we do about our government’s failure to allow coverage for Agent Orange to USO employees under Memorandum 53 of the Federal Employees Compensation Act?

People…the train is leaving the station and once again the government is keeping us divided, this time only addressing the issues of the Blue Water Navy. Before we allow Congress to adjourn from their duty to rectify the wrongs of Agent Orange, we must get them to look at the whole picture and face the fact that this is a problem affecting America, innocent American citizens, and possibly generations of children yet-to-be-born for potential birth defects caused by genetic damage done under this human experimentation with dioxin.

We should urge every veteran, every citizen, not just the handful of veterans who are still alive, to write their legislators and DEMAND that the entire mess be addressed in the pending legislation that’s now in committee. We have their attention and we cannot let them off the hook.

I have composed the following OPEN LETTER to all elected legislative officials and their staffs. I urge every citizen to send a similar letter to their elected officials, newspapers, and other media. We may never get another opportunity. I’ll make it as simple as possible. The most direct way to reach your legislators is via e-mail, but snail mail is okay if that’s all you have.

First, you will need your 9-digit zip code to verify your Congressional Representative. Go to http://zip4.usps.com/zip4/welcome.jsp . Second, go to the Contacting Congress website. This is the best avenue to communicate with Congress.  Go here: http://www.contactingthecongress.org/ . Third, write your letter feeling free to cut and paste any portion of the below OPEN LETTER to yours.

Both Houses of Congress have before them, legislation that is now in committee addressing the issue of Agent Orange, best known as the defoliant used to clear vegetation in the jungles of Southeast Asia during the Vietnam War. The legislation addresses providing benefits to members of the US Navy who served aboard ships in the immediate area where Agent Orange and other defoliants were deployed. Heretofore, only soldiers with “boots on the ground” have been covered. Scientific evidence has shown that beyond a reasonable doubt over-spray and water run-off from the affected land definitely contaminated inland waterways and up to 12 miles of coastal waters, and those covered for benefits should include naval personnel.

You are not getting the whole picture.

Records indicate Agent Orange was manufactured, stored, transported, mixed, and later the surplus destroyed in locations all over the world. Agent Orange was used here in the States in towns and cities, along roadway and highways, and in at least one National Forest, to clear vegetation, and has affected millions of innocent civilians with health problems, birth abnormalities and stillbirths, and will continue to do so into the future.

Also affected was at least one USO innocent volunteer who has suffered through 40 years of cancer just for supporting our troops. These are verifiable facts and undeniable truths the government has done its best to hide from you. A few examples showing WIDESPREAD USAGE worth investigating:

I would urge Congress take a bold step and conduct open hearings regarding Agent Orange. The Department of Defense and the Veterans Administration along with their complicitors, the chemical manufacturers, primarily Monsanto, Dow, and ten others (all big political donors by the way), have spent 50 years keeping the issues pigeon-holed and well hidden from Congress and the public. They have blocked, deceived, stonewalled, falsified reports, and been misleading at every turn, with the sole purpose of an elaborate cover-up affecting millions of people in dozens of countries, but most importantly turning their backs on the American public, NOT JUST THE VETERANS.

On behalf of myself, my readers, my fellow veterans, and millions of US citizens I don’t even know, I trust you will do the RIGHT THING, get to the bottom of all the chicanery and dirty deeds, and help us put an end to this nightmare.