Home Health …And so it came to pass (Hopefully NOT) 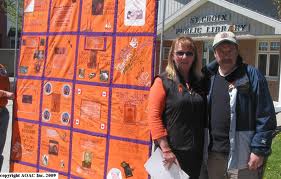 Is it ambivalence? Is it a resignation of defeat? Or are we just too worn out from the battle?

The Agent Orange problem is like a cancer. It grows every day. I can only imagine many veterans have simply thrown in the towel in the war against the government to be justly compensated for the devastation that has been reaped upon many who served in Vietnam and so many more who were fortunate enough not to have been called to duty in Southeast Asia, but were stationed in places like Okinawa, Guam, Marshall Islands, and at bases around the world including South Korea. We have let them make the rules, deal the cards, change the game as it is played out, and then leave us hanging. It has taken fifty years to get this far. Many are no longer with us, and finally, when we have Congress willing to address the issues one last time, it seems our effort has just about run out of stream.

For those veterans who have been denied benefits; run around in circles to even prove you might have been exposed; lied to; had records “lost” or even destroyed; seen our government side with Big Chemical against those who put their lives on the line, and been short changed by pro bono lawyers who grabbed a chance at a settlement and run like hell from the battle, my heart goes out to you.

Many of us writers have tried to tell your story. Many like myself, have stood up and shouted, “it is not just the Vietnam Veterans…it’s thousands of military personnel that were stationed at bases where Agent Orange was tested, used, stored, and destroyed; it’s the innocent civilians, men, women, and children, who happened to live where Agent Orange and other herbicides were used to clear vegetation and road spraying to hold down the dust; it’s the lumber-industry forests where clear-cutting provided jobs to tens of thousands and National Forests where millions of people vacation; it’s the people who ingest crops, animals, and grains that contain dioxin (the main ingredient in Agent Orange), caused by careless and often intentional, over-spraying; it’s the victims in the countries where America used herbicides as a chemical weapon laying waste to the land and creating health problems for generations to come; and it’s the very innocent USO volunteers, who have become the forgotten millions.

The US Government has done its best to separate the masses, isolating the veterans and focusing their denials of any wrong-doing to those who fought for this country, many too sick today, to put up much of a fight any longer. At the same time, they secretly have been taking care of some of the problems as they come to light in the public sector, but never letting on to their little game of “hide the weenie” with the veterans. You see, the civilian population has the US court system. We are a nation where grievances can be heard, adjudicated, and wrongs compensated for by judges and juries without undue influence of some government agency. The legal route can often be lengthy and costly, but eventually there is that light at the end of the tunnel where justice can be served.

The poor veteran on the other hand, must endure an antiquated “tribunal system”, which includes reviews by bureaucrats, much like a court martial where an accused soldier’s future rests with a judge or a panel made up of mostly high ranking officers and possibly an enlisted member with a sleeve full of stripes (Sgt. Major, et al). According to attorney Lt. Col. John Schum (Ret), “Many servicemembers believe that they are presumed guilty and that the trial or the nonjudicial punishment is held just to memorialize the outcome. This belief is unfortunate and opposite of how the justice system really works. However, I must admit that it certainly appears accurate based on the comments and actions taken by noncommissioned officers, leaders and the military attorneys that work within the system”.

Military justice may not always seem just, but those who entered the military should have known that going in. However, the process one must go through in dealing with filing a claim with the VA for compensation for exposure to Agent Orange, should not be the nightmare many have experienced if the procedures are followed EXACTLY. Many who have been waiting decades for a ruling will argue that point, but you must do “the exercise”.

A. The burden of proof starts with proving you were in one of the areas acknowledged to be an area where exposure most likely could have occurred (see VA rules)

B. Then you have to prove your illness has been recognized as one directly related to exposure to Agent Orange

C. You may have to document (obtain records tracking every step along the way) your case which will be closer scrutinized than a job application

D. Your application must be complete and becomes part of your “C” file.

E. Generally, the VA will only grant service-connected disability compensation based on exposure to Agent Orange through what the VA calls its “presumptive service-connected rules.” The VA maintains the list of illnesses and diseases that it agrees are linked to herbicide exposure, including Agent Blue and Agent White. If you are a veteran who served in any of the areas they recognized, you have the right to disability compensation and health care.

F. Get an Exam. Even if you feel healthy, there are several exam options available to you, including the VA or a private healthcare facility or physician.

G. Make sure your physician gets a complete lab report that tests for residual dioxin in your body fat tissue. Dioxin builds up in the body and may never leave once it is stored in body fat.

H. If you use the VA system for your examination, consider getting added to the Agent Orange Registry.

I. Find an attorney well-versed in Agent Orange claims

Unlike civilian legal proceedings, with both the military and the Veterans Administration, the shoe is on the other foot. You have to prove your case. It shouldn’t be this way, but that’s the way it is. This is where all the trickery has come into play over the last 4-5 decades, and why the frustration levels have reached a fever pitch. Many records have been lost or maybe even purposely deleted. In the past some veterans were told what they are looking for is “classified”. I find it unfortunate that stonewalling has become part of what many vets run into but you must be persistent.

So…what to do with our dwindling army of Agent Orange military veterans? Simple…Fight-on!

I received a letter from the Executive Director of the Blue Water Navy Vietnam Veterans Association echoing what I wrote about last Friday about contacting your legislators. I even gave you a sample letter in my article and links to a website where you can go to make the job easy. Just “cut and paste” what I had written our use your own words and send by email.

Director Rossi stated, “we need your help and the help of everyone in your organizations”. My plea went much further. Rather than continue fighting a battle with the government as VETERANS”, we need to let Congress know this IS NOT JUST A VETERAN’S BATTLE, but a battle for all Americans who have been exposed to the federal and state governments’ USE OF THESE VILE CHEMICALS. We can no longer allow the government to hide from the fact that this river runs far deeper than veterans. Must the entire US become an EPA Superfund before legislative action is taken?

As Tonto would have said to the Lone Ranger…”Hells-Bells Kemosabe, Monsanto is still selling this crap and using it every day in the Brazilian Rain Forests, and are already into back-up plan Number 2, promoting Round-up; a product almost as bad”!

It is ironic that we have always had to approach the issue “piece-meal” when discussing “boots on the ground” Vietnam Veterans and Blue Water Navy Veterans, in our dealings with the VA, and continue to let the Government steer us down the corridor marked “veterans only”. Trying to get a bill to fix the problem when it involves not just the veterans but millions of civilians will be far more affective by talking in terms of WE AMERICANS. Don’t let this “Veteran’s Corridor” keep us on the road to extinction, and don’t let this opportunity slip though our fingers. WRITE CONGRESS TODAY FOR ALL AMERICANS.