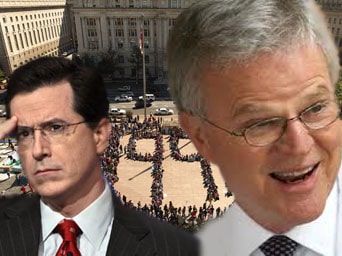 Lakeland, Fl. and OWS]-I learned of long-shot GOP presidential candidate, Governor Buddy Roemer, during his appearance on The Daily Show and emailed a Media Inquiry on September 26, 2011, to his staff member Ryan Williams:

As a Staff Member of Salem-news.com a Feature Correspondent for Arabisto.com and Columnist for Veteranstoday.com I am seeking Mr. Roemer’s response for an article regarding the Palestinian request for statehood and Representative Markey’s letter to the Super Committee.

I am also a citizen of conscience and candidate for US House of Representatives from District 5 in Florida seeking a Presidential candidate I can support and am hoping to learn if Mr. Roemer might be him…

My email continued and three more ensued to Roemer staff members Carlos Sierra and William Pierce, but I never received a reply to my inquiries so today I seized the opportunity to hand deliver the five printed out pages directly to the former Louisiana Democratic congressman and Republican Governor at the end of his Town Hall meeting at Florida Southern College in Lakeland, Florida.

Roemer is on the road throughout America speaking to university students and concerned citizens regarding his platform that focuses on creating jobs and supporting small businesses, making the country energy independent and cutting back on unfair foreign trade.

Roemer also wants to eradicate the power of special interest money in D.C. and is refusing to accept money from any political action committees and his average donation is $60.00.

On Sept. 17th hundreds of protestors took it to the streets at Bowling Green Park in Manhattan, home of the charging bull in New York’s Financial District, to “take the bull by the horns.”

The diverse crowd shared one thing in common being “We Are The 99% that will no longer tolerate the greed and corruption of the 1%,” as stated on the website Occupy Wall Street, where posts also compare the group’s efforts to those used in the pro-democracy movement known as the Arab Spring.

What is your message to these people?

Someone else asked the question and Roemer responded that during a class that morning the topic had also been raised. He spoke about his three hours of listening to and debating with the diverse crowd that “looked scruffy and full of nonsense but they have a spirit that can smell corruption, see unfairness and feel they would have to sell themselves to get a job and they won’t do it. I went to learn and wanted to see if they were communists, socialists or unpatriotic. I am a Deep South boy and I know that young people can change the world. I reminded Herman Cain to remember the Civil Rights Movement.

“Over 59,000 Americans were killed in Vietnam and the kids who called to stop it were called unpatriotic too. But they stopped that war!

“I can smell that GE writes the Tax Code then pays no taxes. I can smell Goldman Sachs who took 600 Billion. I stood in front of the Chinese Embassy in D.C. because Clinton, George W. and Obama gave away our jobs to them-they are all the same! We will have a Fair Trade policy or no trade at all.”

Roemer later spoke about his dozens of trips to China and gave an example of what is reaped from what I call Capitalism without Conscience.

In a factory in China, Roemer spoke with one of the many women who work six-twelve hour days a week. Around her waist was a rope and at the ends were two small children who are denied a childhood so that Americans can buy cheap crap at Wal-Mart.

Roemer nailed it when he said the OWS crowd “argued, laughed and booed me. It was a tough three hours and all the candidates should go and listen.”

On October 19th I listened into a 90-minute online interactive Tele-Forum conversation with two of the organizers of OWS. What I heard from “a few thoughtful, committed citizens [who will] change the world [for]: Indeed, it is the only thing that ever has” is that they are building a movement grounded in personal responsibility that is understood as a duty and privilege.

OWS organizer, Sandra Nurse said, “The people went to sleep, but we woke up and we can no longer be complacent. OWS is the catalyst to a shift in consciousness and evolution. It’s about our oneness. 99% are together and we want the 1% to join us.”

A caller-in mentioned the 2001-2010 UN initiative to create an International Decade for a Culture of Peace and Non-violence for the Children of the World.

Another caller in spoke about the divisions between the left and right that has isolated them and she wondered if the 99% would evolve into a Third Party of citizens of conscience! – OWS, The Second American Revolution and Mr. Jones | VT …

I am a fiscal conservative, spiritual progressive and citizen of conscience for US House of Representatives 2012, who gets much of my news on Comedy Central because if I can’t laugh it’s not my revolution; so playing clean up is The Allied Commander of the Colbert SUPER PAC Nation, but please learn more here: Christian Anarchy Meets Occupy Wall Street