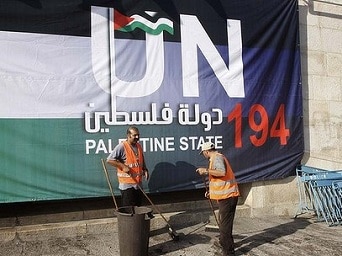 Yitzhak Rabin was desperate to see the Intifada end and not be on the headline news every day. Yasser Arafat, Mahmoud Abbas and their cohorts in the PLO were desperate for new legitimacy and new mission, having lost it all with siding with Saddam Hussein. In Oslo both leaders found what they were looking for with Israel being the only true winner. Israel kept its Jewish Occupation and found in Arafat and the PLO, the willing partner to pay for it.

The Palestinian people do not need memberships in the UN or in UNESCO or WHO (World Health Organization), FOA (Food and Agriculture Organization), or ILO (International Labor Organization), they desperately need an international trusteeship that can take over the responsibilities for the Occupied Territories, both “land and people” from Israel, end the PLO regime, and put the Arab-Israeli conflict beyond US domestic politics, and put the US out of any role the sham called “peace process”. 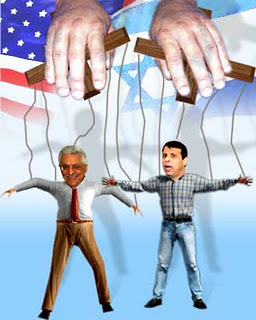 Let not the euphoria over UNESCO membership fool any one. It will not change anything on the ground, and it will not change the “Judaisation” of East Jerusalem and all of the Occupied West Bank or end the illegal siege of Gaza.

It will be true of the “mute” membership application to the United Nation since it too will not change anything on the ground and it will not change the fatal predicament of the Palestinian leadership of “Abbas & Co.”.

After so many years of lies, fraud and looting, the best thing this leadership could come up with is Oslo Accord, turning the PLO from a “liberation movement” to an admitted “terrorist organization” according to the exchange letters between Arafat and Rabin. And turning the PLO and Fatah to a civil and security manager of the Jewish Occupation, its army and its Jewish settlers and terrorists.

Mahmoud Abbas, the man who led the Oslo negotiations complains lack of and demanding the “Quartet” set forth an “ international reference” for the negotiations. Question one must ask Mahmoud Abbas and his not so brilliant team of (Qurai and Assfour) why did they all fail to do that when they had the chance in Oslo?

Is this the leadership expected to come up with earth shattering and far reaching decisions according to spokesperson Nabil Abu Rudienah, while Mohamed Eshtieh expected the Palestinian leadership to “reinvent its mission and function” with Abdul Barri Atwan of Alquds Alarabi calling it “Abbas nuclear options”? Is this man who negotiated Oslo, capable of coming up with imaginative, earth shattering solutions when he continued to negotiate with Israel for 20 years, negotiating a “process” but never reaching the point of “final status issues”? I do not think so. He and his “Palestinian leadership” are simply unfit and unqualified to lead the Palestinian into the future.

And why did he (Mahmoud Abbas) fail to negotiate and include a “contingency provision” in Oslo for possible failures of “peace process” knowing well Israel’s history of “Talmudic” negotiations and never honoring any agreements it commits to, not with G-d certainly not with man or any nation not even the US?

One must ask Mahmoud Abbas how and why he agreed to the PA/PLO to become a civil and security contractor even paying and funding the Jewish Occupation while allowing Israel under Oslo to continue with expanding its settlements, ethnic cleanings of Palestinians from East Jerusalem?

I am sure Mahmoud Abbas and Ahmed Qurai let alone Arafat did not even consider the consequences of giving Israel total administrative and security control over Area C, an area representing 58% of the total Occupied West Bank? Did Mahmoud Abbas and his negotiating team have the benefits of a “ team of experts” to assist in negotiating Oslo? The answer of course is NO. It never looked after the people under Jewish Occupation and it never looked back at the people it abandoned in the Diaspora.

Yasser Arafat turned down Jimmy Carter deal for a Palestinian state when there were only 10,000 Jewish settlers, and he agreed to Oslo with the numbers at 90,000 and since Oslo the number of Jewish settlers jumped to 600,000.

In Oslo Arafat simply negotiated a deal that is much worse. The PLO in addition to giving Israel full unconditional recognition had no authority over the land let alone the people. Israel continues to decide who can come and who can go and who can stay? Israel continued to confiscate and steal the land at will while the PLO begs the money to funds its operation in service of the Jewish Occupation.

More than ever, this Palestinian leadership of Abbas & Co., have no choice but to seek UN Trusteeship over the Occupied Territories to include the West Bank, Gaza and East Jerusalem, disband the Palestinian Authority, certainly disband the PLO as an organization that never had its legitimacy from the people in the first place. The people demand a “regime change”. Abbas & Co and the entire “Palestinian leadership” must go. Time for international trusteeship not UN membership.