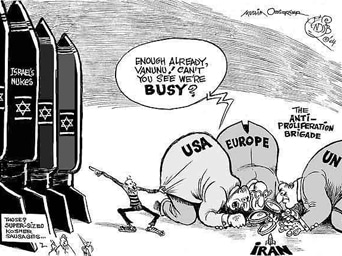 In remarks to Israel’s Knesset, Prime Minister Netanyahu said, “A nuclear Iran will pose a serious threat to the Middle East and the entire world, and it of course poses a direct and heavy threat to us.”

On September 3rd, Gen. Hasan Firouzabadi, supreme commander of Iran’s military and Revolutionary Guards armed forces, said, “Iran hopes there won’t be a need to target the nuclear facility of the Zionist regime, but if there is, Israel would receive dreadful retribution. Our developed weapons can hit any part of the Zionist regime.” [1]

Israeli ambassador in Washington Michael Oren, claims Hezbollah in South Lebanon has 16,000 rockets ranged to cover every part of Israel with enhanced precision and that includes the Dimona WMD facility- which has never allowed International Atomic Energy Agency inspectors into.

The Associated Press reported last Friday that unnamed Diplomats said the UN atomic agency plans to reveal intelligence this week suggesting Iran made computer models of a nuclear warhead and will share with its 35 board members satellite imagery of what the IAEA believes is a large steel container used for nuclear arms-related high explosives tests.

“Israeli President Shimon Peres said Friday that the international community is closer to pursuing a military solution to the standoff over Iran’s nuclear program than a diplomatic one. The comments, from a known dove, assumed added significance because they followed unsubstantiated reports that Prime Minister Benjamin Netanyahu was seeking his government’s support for a strike against Tehran.” [2]

Almost all of the oil output of Saudi Arabia, the Gulf States, Iraq and Iran run through the Strait of Hormuz. Iran is well equipped with missile boats and land-based missiles. It doesn’t require much intelligence to comprehend that Iran would close off the Strait of Hormuz as soon as the first Israeli plane entered Iranian airspace. The blowback to the world’s economy with the elimination of nearly a fifth of the industrial nations’ supply of oil would lead to the end of the world as we now know it.

“I am asking the committee to remove my name from the nominations. I cannot be part of a list of laureates that includes Simon Peres.

“Peres established and developed the atomic weapon program in Dimona in Israel.

“Peres was the man who ordered my kidnapping [and] he continues to oppose my freedom and release.”

The two signed a broad-ranging agreement governing military ties between the two countries that included a clause declaring that “the very existence of this agreement” was to remain a secret.

However, while researching for a book on the close relationship between the two regimes, Sasha Polakow-Suransky an American academic unearthed the evidence and published it in “The Unspoken Alliance: Israel’s secret alliance with apartheid South Africa.”

Sasha also documents that Israeli officials “formally offered to sell South Africa some of the nuclear-capable Jericho missiles in its arsenal.”

After a March 1975 meeting attended by South African military chief of staff, Lieutenant General RF Armstrong, wrote a “top secret” memo laying out the benefits to South Africa in obtaining the Jericho missiles if they were fitted with nuclear weapons.

On 4 June 1975, Peres and Botha met in Zurich and by then, the Jericho project had been renamed Chalet.

Botha did not go ahead with the deal because of the cost and the fact that final approval was dependent on Israel’s prime minister.

South Africa did build its own nuclear bombs and also provided much of the yellowcake uranium that Israel required to develop its nuclear arsenal.

The documents also confirm that former South African naval commander, Dieter Gerhardt admitted there was an agreement between Israel and South Africa called Chalet that involved an offer by Israel to arm eight Jericho missiles with “special warheads” understood as atomic bombs.

“Some weeks before Peres made his offer of nuclear warheads to Botha, the two defence ministers signed a covert agreement governing the military alliance known as Secment. It was so secret that it included a denial of its own existence: ‘It is hereby expressly agreed that the very existence of this agreement… shall be secret and shall not be disclosed by either party.'” [Ibid]

No secret that British officials are reportedly working on a plan to assist U.S. forces in a pre-emptive attack on Iranian military facilities:

What else we know is that what is often claimed as Intelligence is not necessarily so: